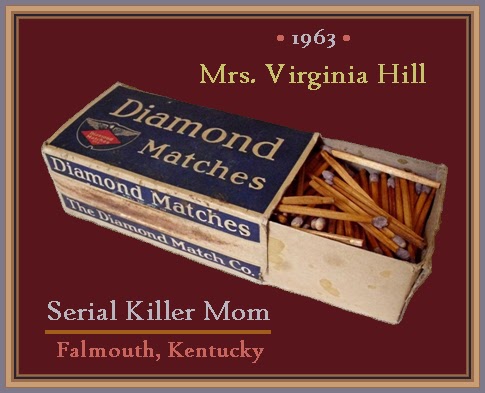 She admitted killing one other and setting a fire in which three more died, officials said.

Mrs. Hill was in jail while the Pendleton county grand jury took up her case today.

She was arrested after a pathologist found contusions on the neck of Kenneth Hill, two, who died April 7. Police said Mrs. Hill admitted smothering the boy with a pillow after her husband said he was leaving her, but that she could give no reason for the act.

Sheriff’s deputies said yesterday that Mrs. Hill signed a statement saying she set the fire in which three of her children and a Falmouth man died on Dec. 29, 1957.

“She didn’t give any reason for starting the fire; she just said something about dropping a match in a box,” a deputy said. “But she said she was separated from her husband at the time.”

Deputies said she has been charged with murder in Kenneth’s death and with arson.

The fire victims were her children by a former husband, Mervin Jenkins. They were Danny Ray, 26 months; Helen, 13 months, and Lee, three months. The other victim was Theodore Hamilton, 45, who apparently was overcome by smoke.

Two other children of Mrs. Hill died a month in 1981. Their deaths were listed at the time as caused by sickness.

Mrs. Hill’s last child, a son, was born four months ago and is now staying with his grandmother, Mrs. Margie Perkins.

Mrs. Hill was arrested in April after an autopsy showed contusions on the neck of her 2-year-old son, Kenneth Dwayne Hill. Police said she admitted smothering him.

The other charges were filed against Mrs. Hill as the result of a fire December 29, 1957. The fire took the lives of her three small children by two previous marriages and of Theodore Hamilton, 45, Falmouth, who tried to rescue the tots.

FULL TEXT: Falmouth, Ky. – Mrs. Virginia Hill, convicted of killing her two-year-old son, Thursday was sentenced to 15-year prison terms on each of four other manslaughter charges. The time is to be served concurrently with her previous 15-year prison sentence.

The 28-year-old mother of seven was denied a new trial on her earlier conviction by Pendleton Circuit Judge John T. Lair.

Mrs. Hill was found guilty June 3 of smothering her son, Kenneth, with a pillow April 7, 1963.