A Husband-Killing Epidemic in South Carolina, 1932 – Advice for Husbands 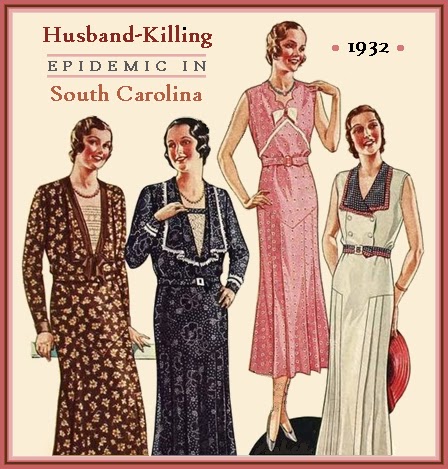 FULL TEXT: Even the casual observer of North Carolina events as reflected in the public prints will have noticed that the habit of wives separating themselves from husbands by force and arms is of alarming frequency here of late. That is, the practice, which seems to be on the way of becoming habit, should be alarming to husbands. The unmarried male may not so much concern but he is by no means from the possibility of violence at the hands of lady friends. The husband-killers are not only performing with disturbing frequency but it is more or less of a custom for juries to say the job was well done, or words that have the same effect.

There are husbands who deserve to be killed on general principles and seeing that the woman will usually have the sympathy of a male jury it is comparatively easy to get that angle into the minds of the average juror. In a recent case the territory for the prosecution showed in the wife in an ugly light. She was by no means a martyr. But the man was of bad repute. So the jury decided he had it coming.

An eminent criminal lawyer – one of the rare type who appears either for the defense or the prosecution – was saying recently, in expressing an be lodged in the minds of the jury that the deceased deserved to be killed on general principles a verdict of acquittal is more than likely, regardless of the, evidence. If the jury feels that the deceased deserved little consideration it will overlook the irregularities on the part of  the slayer unless the circumstances are so aggravated that it is impossible to overlook all. And that’s where the wives have the advantage when  they decide to remove an undesirable husband and do the removing either “accidentally” – or have it appear so – or on purpose and offer the meanness of the deceased as an excuse. The woman has the edge there but it’s the reverse when the man removes the woman. The fact that a husband killed his wife sets the tide against the killer at the outset; and it takes overwhelming testimony to find a way of escape for him. There is no thought in such case that the woman may have deserved killing. All wives are given the benefit of the doubt while the doubts are resolved against husbands who kill wives. If it appear from the evidence that the wife may have provoked the killing the jury will agree that it was not the husband's business to do the job.

Far be it from us to lodge the thought in the mind of any wife that an undesirable husband may be removed with comparative safety, on the whole case the chances are good that there is always the possibility of finding an exception and the disposition to be considerate of husband-killing wives is subject to change without notice. Almost any time there may come to the consciousness of husband-jurors the thought of personal danger and juries may take to the view that there is too much of the killing, with serious consequences to the self-widowed.

But if there is a moral in the present wave of husband-killing by wives and the freeing of the women, it is that husbands would do well to walk circumspectly. If they can’t abide the premises without engaging in unseemly conduct it would be safer to vacate. One may be in the right but after he is dead and the woman and her friends tell how it was, he might be in doubt himself if he hear the testimony.