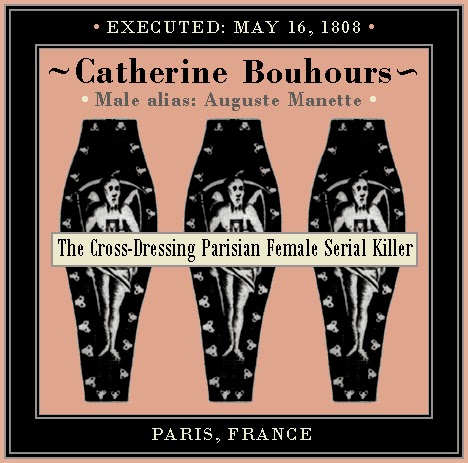 NOTE: The correct name, presumably, is Catherine Bouhours and she used an alias of Auguste Manette (according to sources published long after her execution). Her name is given in many variations in French and English texts over the past two centuries, sometimes combining the real name and the alias, and introducing various spellings of the correct last name.

French sources give the date of execution as May 16, 1808. The executioner is named in some sources as Henri Sanson. Apparently a death mask was made which was later used to construct a bust to be used in phrenological studies. This bust is included in published  inventories of the Gall phrenological collection Musée de l’Homme in Paris.

Following is an account of the Bouhours case published in 1837 which does not mention the woman’s name. It gives her age as 25, rather than 22, as some sources do. This text was reprinted often later in the 19th century (1850 onward) without attribution, with incomplete attribution, or with the name of a later author falsely affixed to it.

The author of this text, Baron Langon (Étienne-Léon de Lamothe-Langon), states that this story, as with all the contents of the book in which it appeared, is a faithful account of what transpired as reported by Prince Cambacérés, Second Consul, Arch-chancelor of the French Empire. [Baron Langon, Evenings with Prince Cambacérés, Second Consul, Arch-chancelor of the Empire, Duke of Parma, &c. &s. &., Vol. I, London: Henry Colburn, 1837. (pp. v-vi)]

The following story appeared in Volume II, pages 246-252, of Evenings with Prince Cambacérés:

“About the close of the government of the Directory, the keepers of a hotel garni, in the Rue de l’Universite, waited on the minister of police, and in a state of great agitation, stated that one of his lodgers whom he named, had been murdered on the preceding night. He had engaged the lodging about six o’clock in the evening, describing himself as an inhabitant of Melun, who had come to Paris for a day or two on business. After ordering his chamber to be prepared for him, he went out, saying that he was going to the Odeon, and would return immediately after the performance. About midnight, he returned, but not alone; he was accompanied by a young and beautiful female, dressed in male attire, whom he stated to be his wife, and they were shown to the apartment which had been prepared. In the morning, continued the hotel keeper, the lady went out; she appeared to be fearful that her husband should be disturbed; and she desired that no one should enter the room until her return. Several hours elapsed, and she did not make her appearance; at mid-day, considerable surprise was manifested at her prolonged absence, and the servants of the hotel knocked at the gentleman’s door, but without receiving any answer. It was now discovered that the lady had locked the door, and carried the key away with her. The door was broken open, and the unfortunate man was found dead in his bed. A doctor was sent for, and he declared it to be his opinion that the man’s death had been caused by a blow of a hammer adroitly inflicted on the left temple. The female never again appeared; she was sought for in vain.

“In about a month after, a similar murder was committed. The victim was likewise a man from the country, and his death was produced in the manner I have above described. The affair excited considerable consternation in Paris. Within another fortnight, a third crime of the same kind was committed; and in all these affairs the mysterious female in man’s attire was involved. It is scarcely credible, but nevertheless true, that eighteen or twenty of these extraordinary murders were committed with impunity! In every instance, the little that was seen of the woman rendered it difficult for any one to give a minute description of her person : all the information that could be obtained was, that she was young, very pretty, little, and well formed. This description of course answered that of many women in Paris besides the murderess.

“Meanwhile, Napoleon arrived from Egypt, and possessed himself of the reins of government. Being informed of the atrocities which had been committed in the capital, he directed that active measures should be taken for the detection of the criminal. He spoke to Fouche on the subject. At that time, the capital was filled with Fouche’s spies. One of these spies, a fine looking young man about twenty, was one evening accosted in the street by a person, whom he at first supposed to be a very handsome youth. He passed on; but suddenly the thought struck him that the person who had spoken to him was a woman in disguise, and he immediately recollected the female assassin.

He turned back, and entered into conversation with her. She at first denied her disguise, but finally acknowledged it, and the young man prevailed on the nymph to accompany him home, in the character of a young relation from the country.

“He named a hotel in which one of the mysterious murders had been committed.

These words confirmed the suspicions of the police agent. He alluded to his property, and mentioned two hundred louis which his uncle had given him, of which he said he had not spent the twentieth part, adding, “Well, then, if you will not go to my lodgings, where else shall we go?”

The female mentioned an hotel, to which they immediately repaired. The young man was about to leave the room to order supper, when the woman called him back.

“Will it be safe,” said she, “to leave your money all night at your lodgings? Is it not likely you may be robbed? Suppose you go and bring it here.”

“Ah!” thought the young man, “the veil is now raised;” and then, without the least appearance of suspicion, he thanked her for the prudent hint, and went away, under pretext of going to fetch the money.

“He immediately repaired to the office of the police minister, and gave information of the discovery he had made. Furnished with the sum of one hundred and eighty louis, he returned to the house where he had left the woman. He was accompanied by several agents of the police, who stationed themselves at the door of the apartment. The murderess and her pretended lover sat down to supper. She requested him to reach her handkerchief, which she had left on a console behind his chair. He rose to get it, and during the instant his back was turned, she poured a powerful narcotic into his glass.

He did not perceive this, and drank off his glass of wine hastily; but he had no sooner swallowed it than he exclaimed, “What wretched wine!” The lady made the same complaint. A second glass was poured out, and pronounced to be better.

Meanwhile, the young man felt his head becoming confused, and his limbs growing stiff. With well-acted concern, the woman rose, and threw her arm round his neck, apparently with the intention of supporting his drooping head. At this moment, he mechanically raised his hand, and he felt the fatal hammer in the side-pocket of the coat worn by the female. He felt conscious of the danger of his situation; he attempted to rise, and leave the room, but his strength failed him. He tried to speak, but his tongue was paralyzed. By one desperate effort, he made a faint outcry, and then fell on the floor, in a state of utter insensibility.

The woman drew the little hammer from her pocket, and laid it on the ground. She then searched her victim, took his purse, and deposited it in the pocket of the waistcoat she wore. She placed his head in the requisite position to receive the deadly blow, and she had raised her right arm for the purpose of inflicting it, when the fatal hammer was suddenly arrested from her grasp. The police agents opportunely entered the room at that moment.

“Ah! Monseigneur!” I exclaimed, “surely you are narrating fiction, and not fact. But, of course, this monster, in woman’s shape, paid the penalty due to her crimes.”

“That which occurred after her arrest,” pursued the Prince, “is the strangest part of her story. On her first examination, she gave the following romantic account of herself. She was of a respectable family and of irreproachable conduct; but having bestowed her affections on a young man, who had treacherously forsaken her, she had from that moment vowed implacable hatred against all the male sex; and the murders she had committed were actuated by no other motive than vengeance for the injury inflicted on her feelings. Would it be believed that there were persons weak enough to pity this unfortunate victim of betrayed affection? The sensibility of the world, especially of the great world, is often very ridiculous, and sometimes very blameable. An effort was made to screen this wretched culprit from the punishment of the law. When asked why she committed robbery, as well as murder, her defenders could give no satisfactory reply. The criminal, however, underwent the penalty of the law; and certainly society had reason to rejoice that the punishment of death had not been abolished.”

“No doubt it is. But what do you think of it in application to the case I have just mentioned?” 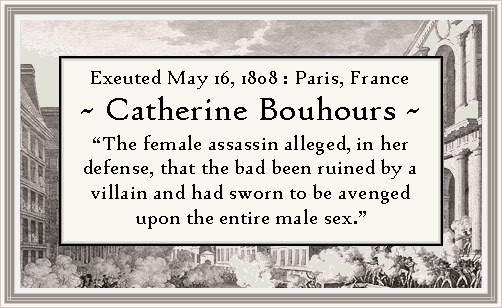 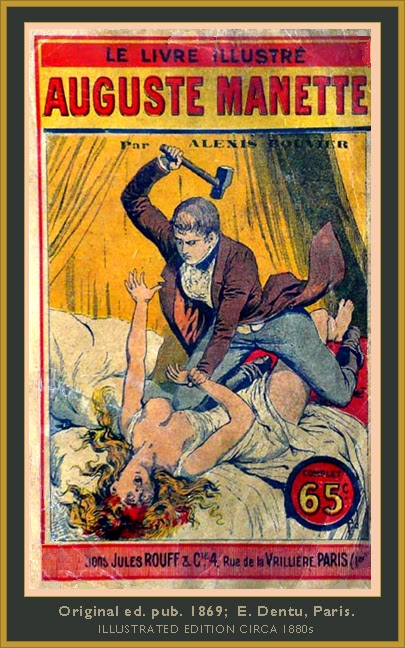 Following are some fragmentary sources:

[A] girl, called Bonhours, who was executed in Paris at the age of twenty-two, for robbing and murdering several people, is described as of remarkable muscular strength, and her favourite weapon was a hammer!

The celebrated Bonhours, a prostitute and murderess who wore masculine garments, and was as strong as a man, killed several men by blows from a hammer.

EXCERPT: The following mention is extracted from a discussion of phrenological descriptions:

“in another criminal, to whom murder had become a habit; in Bouhours, who killed her victims with a hammer, in order to rob them of their money … In Bouhours, three organs had acquired a high degree of development. The excessive activity of one produced a propensity to steal; of the second, to murder; and of the third, to fight;—an unhappy concourse, which can only explain the atrocious conduct of this monster.”

[François Joseph Gall, Organology, Or, An Exposition of the instincts, propensities, sentiments, talents, or of the moral qualities, and the fundamental intellectual faculties in man and animals and the seat of their organs.” 1835, Vol. 4 of 6 vols., Marsh, Capen & Lyon (Boston), p. 111-12]

The following reference to the case, from 1824, gives the sex of the criminal as male.

“in Bonhours, who felled his victim with a mallet, to rob them of their money.”

There exists a plaster cast of Mme. Bouhours, part of the Gall phrenological collection of the Musée de L'Homme, Trocadéro. The cast is likely to be a death mask of the executed woman.

“Catherine Bouhours, alias “Auguste Manette”; aged 22;  convicted (or executed?): May 16, 1808 [various French texts; to be made accessible at gallica.bnf.fr at a later date];
Executed by Henri Sanson

Primary source: Jean-Jacques Régis de Cambacérès (1753-1824) is cited as the original author in English language publications (1850 and later reprined) of the of the long account of the crimes, search capture and prosecution. The specific Cambacérès text is not, however cited.

Bust, presumably plaster, possibly made from a death mask – cited as having the label “Bouhours” in Gall collection inventory. 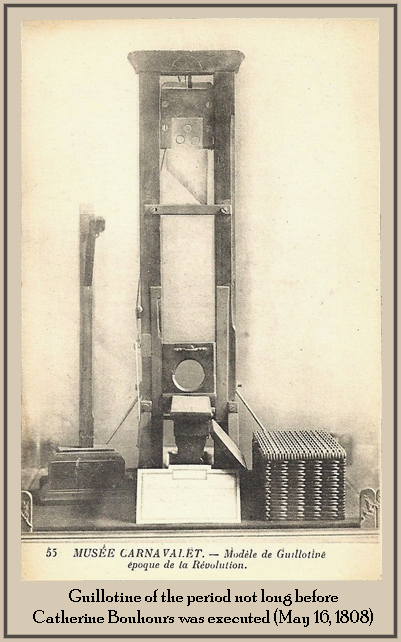 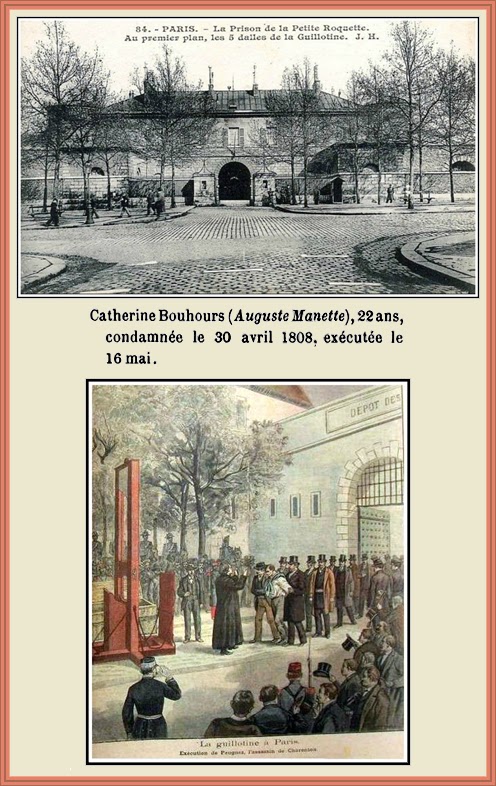