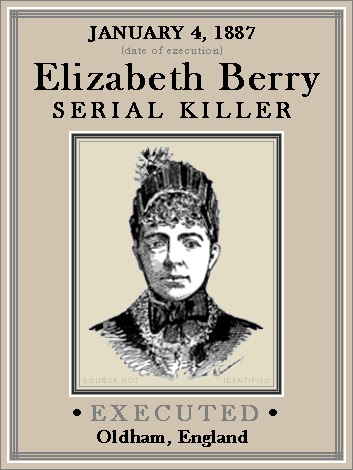 EXCERPT: Lizzie Berry left a trail of profitable bereavement behind her. Her husband, Thomas, had died in 1881; her son, Harold, in 1886; and her daughter, in 1887. She had drawn insurance benefits after each of these deaths. All were sudden deaths, and, at least in the last two, the victim, nursed by Berry, had been recovering when she was struck ill for the last time.

[Judith Knelman, Twisting in the Wind: The Murderess and the English Press, 1998, University of Toronto Press, p. 81]

Mary Ann Berry, 11: “… her mother asking her to drink the white liquid contents of a glass, and the little girl saying, ‘No, mamma, I can’t.’” – and, later, as the child’s health worsened: “At the time the child was vomiting the [mother] had a tumbler in her hand. [Mary Ann] said, ‘Oh, mamma, I cannot drink it.’”


FULL TEXT: The county police authorities in Rochdale up to yesterday evening had received no information from the Home Secretary as to prosecuting Mrs. Elizabeth Berry on the charge of murdering, Mrs. Finley, her mother, at the village of Castleton, and this goes to strengthen the published statement that she will be executed on the 14th. Inst. There have been missing links in the published career of Mrs. Berry, but some have now been supplied.

For instance, at the trial for poisoning her daughter, it seemed incredible that she should have taken the life of her child for the paltry sum for which it was insured, whereas the fact was she had insured it for £100, and in her haste compassed the child’s death before the insurance company had completed the documents, and she was under the impression that the £100 would be due. Her boy was insured for £10, but her account of his death was rather suspicious. She was in the habit of stating that her boy and girl and Mrs. Finley, on their last visit to Blackpool, were lodged in damp sheets, and that actually the evening they arrived the sheets, and that actually the evening they arrived the sheets were hanging out on the clothes-line to dry. Both children were ill and the boy died in about three days. Those who knew Mrs. Berry’s husband very well at Miles Platting deny that he was a delicate man whilst employed there as a railway official. In support of this statement was the fact that he was passed by an insurance doctor as a thoroughly healthy subject, and accordingly was insured.

FULL TEXT: At the Blue Pits Inn, Castleton, on Monday, Mr. F. N. Molesworth, district coroner, resumed the inquiry into the circumstances attending the death of Mary Ann Finley, mother pf Elizabeth Berry, who now lies under sentence of death for the murder by poisoning of her daughter. It will be remembered that Mr. Finley died on the 15th February, 1886, at 4, Back Albion-street, Castleton. Mrs. Berry, her daughter, was staying with her at the time, and after the revelations which were made in connection with the death of Mrs. Barry’s child, the Home Secretary granted an order for the exhumation of the body of Mrs. Finley, in order that full inquiry might be made touching the suspicion that her demise had been brought about by foul means.

Mrs. George Shaw, clerk to the guardians of the Chesterfield Union, deposed that Mrs. Barry was appointed as a nurse of the workhouse at Chesterfield on the 23rd Jan., 1886, and entered upon her duties on the 1st Feb. following. The next morning she left, owing, as she said, to the serious condition of her mother. She told witness she was seriously ill. On the morning of the 5th February he received a letter from her in the following terms: “Sir. – My mother is sinking very fast, so that it will be impossible for me to leave her of resignation of the office of nurse on the ground that “my mother is dangerously ill, and it is impossible for me to leave her.”

Police-sergeant W. Kidd spoke to being present at the post-mortem examination of the remains of Mrs. Finley, and receiving certain portions, contained in sealed jars, for analysis. He gave them to Mr. Paul, of Liverpool.

Mr. Paul, F. R. C. S., lecturer on medical jurisprudence, University College, Liverpool, deposed to having analysed the portion of the body submitted to them. The result of his analysis showed that no mineral poison was present in the body, but he had extracted a substance from the stomach and intestines which had the same effect upon animals as atropia, and which he believed to be atroptia. He sought to say in explanation that this was a poison that could not be tested like mineral poisons. The only efforts were the effects that could be produced upon animals. It was a substance extracted from deadly nightshade, and caused death through the nervous system.

Mr. W. H. Sharples, a surgeon practising at Castleton, gave evidence as to attempting the deceased woman in her last illness. On the 27th January, 1886, he was called to attend her. She had had a severe attack of bleeding from the nose. He prescribed her, and she got to be able to go about again. He saw the woman three days afterwards, and again on the 6th February. She was then complaining of palpitation of the heart and sleeplessness. He continued to attend the woman until her death. On the day she had a fit, and on the 9th or 10th of February he saw her convulsed. Having heard the evidence of the last witness and assisted in the post-mortem examination he was now of opinion that the deceased woman did not die from “cerebral hemorrhage and coma,” as he had certified at the time, but from poisoning by atropia. All the symptoms he saw in her were consistent with the administration of that poison, except that only once did he see any dilation of the pupils.

Dr. Paul was here recalled by the coroner, and he  stated thar Mr. Sharples’ evidence respecting the symptoms of Mrs. Findley’s ailmernts were consistent with poisoning by atropin. It wass a very slow process to discover it in the decomposed matter supplled to him.

Dr. Harries, of the Manchester Royal Infirmary, stated that he made a post-mortem examination of Mrs. Finley’s body at Morton Cemetery on the 3rd inst. The body was very much decomposed; the hands very nearly separated by maceration from the body. The abdominal cavity, however, was not opened, and the walls were not destroyed. The body was that of a well-nourished woman. The stomach had exceedingly thin walls, which were very fragile, and through which there were one or two small apertures in the abdominal cavity. There was nothing inside the stomach. In the abdominal cavity there was a small amount of fat, he removed and forwarded to Dr. Paul. The various organs of the body were not sufficiently diseased to account for death; but there were some diseases which after such a length of time after burial would leave no evidence of their presence. He had heard Dr. Paul’s and Mr. Sharples’ evidence, and he corroborated Dr. Paul’s opinion that the symptoms were very suspicions of atropia poisoning.

Sarah Pemberton stated that she resided at East View, Burslem, Staffordshire, and was sister to Mrs. Finley. On the 11th of February, 1886, she received a telegram from Mrs. Berry stating that her sister was dangerously ill, and that if she wanted to see her to come at once. She did so, and found Mrs. Finley in bed, and attended by Mrs. Berry, who administered to her medicine. The first night she stopped up with her sister all night, and Mrs. Berry slept upstairs. On Friday evening Mrs. Berry went to Rochdale, and was away about two hours, and offered her mother some jelly, who, upon tasting it, pushed it away, saying, “Take it away; I don’t like that.” Mrs. Finley at the time was cheerful and appeared to be recovering. Witness retired to bed about twelve o’clock, and woke up about four or five o’clock next morning, when Mrs. Berry called her down, saying there was a great change in her mother for the worse. She found her on her back, clutching her hands, and was all of a tremble. Her face was of a livid colour, as if the blood was all in her head. Witness thought that she was in a fit. Her eyes were closed. On the Friday night Mrs. Berry rubbed her mother’s eyes, and Mrs. Finley asked her what she was doing to her eyes. The deceased’s eyes never suffered, nor did Mrs. Berry’s replied that he had stated that there was a great deal of brain mischief at work. She then asked Mrs. Berry her opinion, as she was a practiced nurse. Mrs. Berry replied that she thought her mother was sinking fast, but witness at this time was of opinion that her sister was much better.

Mr. Joseph Chadderton, manager to the Wesleyan General Insurance Society, stated that Mrs. Finley was insured in his office for £100, and the amount was not due to Mrs. Berry until three months after Mrs. Finley’s death; but in consequence of Mrs. Berry telling him that she was going to Australia as a nurse, he paid her £100, minus 16s. 8d. for interest.

Mr. Congs said he was clerk to the National Sick and Burial Association in which Mrs. Finley was insured, and he paid Mrs. Berry on the 15th of February, 1886, £13. 4.

The Coroner having summed up, the jury deliberated in private for about 15 minutes, and unanimously returned a verdict of willful murder against Mrs. Berry. 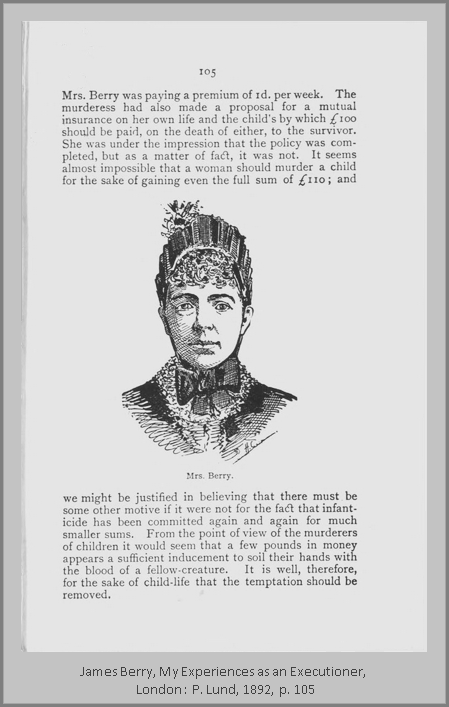 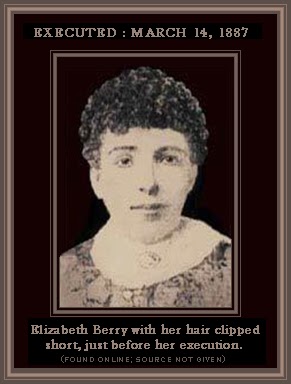 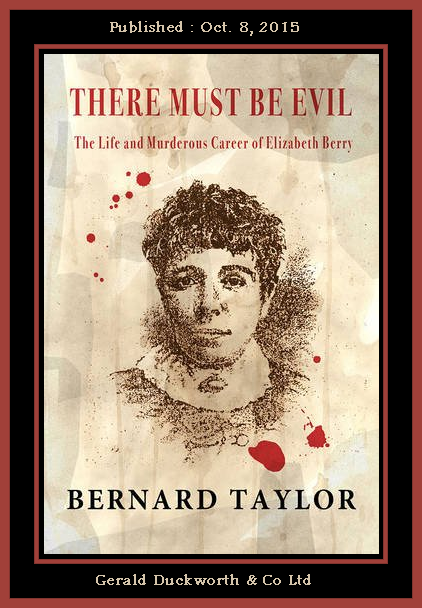 Publisher’s text: In 1887, Elizabeth Berry, an attractive young nurse from the grim Oldham workhouse, found notoriety throughout the nation after the death of her daughter, perceived by many to be the cruellest of murders - performed with an ice-cold callousness that was almost beyond belief. There were many who protested her innocence in the affair, but there were also suspicions surrounding another death related to the nurse: that of her mother. Suddenly Elizabeth Berry’s dark story began appearing darker still. Was she in fact a coldblooded serial killer? In his new book celebrated crime author Bernard Taylor, investigates the disturbing life of Elizabeth Berry endured during an era of grinding poverty when Victorian England was obsessed with the exploits of murderers and forensic science was in its infancy. He takes a fresh look at the demise of Berry’s husband and two other young children, deaths that for a long time were considered to be of natural causes. For the first time we discover the true story behind this infamous case of the first woman to be hanged at Liverpool’s Walton Prison and one of the Victorian period’s most harrowing set of homicides. [Duckworth Press] 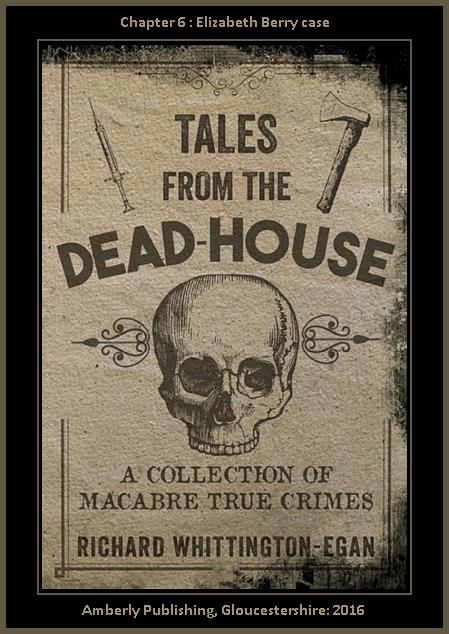