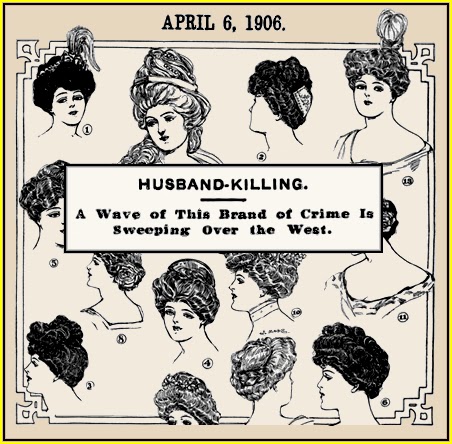 FULL TEXT: A wave of husband-killing is sweeping over the West. Within the past few months many women have put their husbands to death, in several instances so that they might wed others. Even the hanging of a murderess in Vermont has not been able to check this. Iowa illustrates what is true of many other States. Of eight women who have recently been tried in that State for murdering their husbands, but two have been convicted and but one is now in State’s prison. This record is all the more remarkable when the other side is investigated. Within the same period four men have murdered, or attempted to murder, their wives and sweethearts. With the same ratio of convictions prevailing as in the cases of accused women but one of these men would be convicted. But every one one of the four men has as a matter of fact, been convicted.

A criminologist claims that the wide attention and notoriety which the execution of a woman attracts shows how rarely a woman is thus punished, although, he says, the number of murders committed by women in this country every year is very large. He asked whether an undue leniency is not often shown them by courts and juries because of their sex. Lombroso referred to this subject. In several of the recent cases in the West the women were freed either by judicial or executive action after conviction, and in others the juries disagreed.