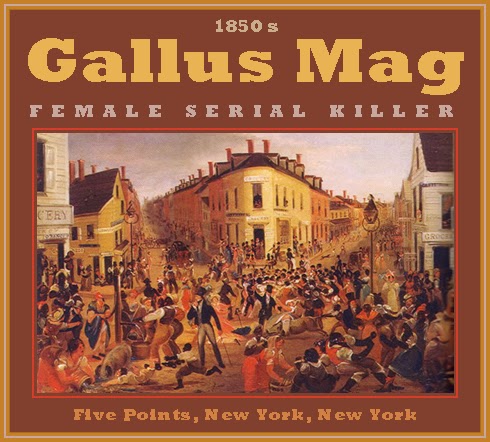 EXCERPT: In the middle of the last century a 6-foot-4 English lady bouncer named Gallus Mag, who kept her skirt up with suspenders, was New York’s most famous gang lady. So efficient was Mag’s bouncing that she killed four customers in one month, forcing the police to close the joint she was presiding over. Her enemy and counterpart was Sadie the Goat, whose favorite technique was butting an opponent cold with her head. The two got into a fight which Maggie won after biting off one of Sadie’s ears which she kept as a souvenir in a pickle jar.

"It was her custom, after she’d felled an obstreperous customer with her club, to clutch his ear between her teeth and so drag him to the door, amid the frenzied cheers of the onlookers. If her victim protested she bit his ear off, and having cast the fellow into the street she carefully deposited the detached member in a jar of alcohol behind the bar…. She was one of the most feared denizens on the waterfront and the police of the period shudderingly described her as the most savage female they’d ever encountered."