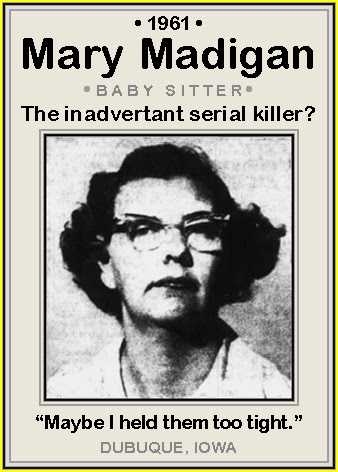 FULL TEXT (Article 1 of 2): Dubuque – Mary Madigan, a babysitter for at least a dozen Dubuque families, was scheduled to go to court Saturday to face “some kind of homicide” charges in the deaths of three young children.

Police said the 29-year-old Miss Madigan signed three statements admitting that she was the sitter when three babies, ranging in age from four months to three years, died.

The husky Miss Madigan, who stands 5 feet 8 and weighs 192 pounds, was described as being both mentally and physically handicapped.

No suspicion had been attached to Miss Madigan until the county medical examiner determined that Gail Nemmers, 3, who had been left in her care Thursday night, died of suffocation.

Then police Capt. Byrne O’Brien began looking looking into the death of another child of Mr. Wayne Nemmers, Karen, 22 months, July 12 and the death of Michael Fitzpatrick, 4 months, son of Mr. and Mrs. Russell Fitzpatrick, July 14.

Miss Madigan who had acted as baby sitter for both of these families, told police after her arrest and after her recovery from hysteria, that she liked to “hold babies tight.”

“I was trying to give them love and affection,” she said.

The oldest Nemmers girl, Gail, was being held across her lap and when the child cried she held her hand over it’s mouth, “quite a bit.”

She held Karen Nemmers and the Fitzpatrick boy with their mouths close to her neck and Lucas quoted her as saying: “They seemed to gasp for air, and their bodies went limp.”

In each case she put the babies back in their beds, but on Thursday night, after Gail Nemmers had stopped breathing. Miss Madigan telephoned the widowed mother with whom she lived, police said.

Dr. Donald McFarlane, county medical examiner, said there was no indication in the autopsies of the other two children that death was from other than natural causes. He said Karen Nemmers had a congenital heart ailment and the Fitzpatrick boy had virus pneumonia.

“These conditions could be aggravated by suffocation,” Dr. McFarlane said.

Loius Fautsch, attorney for Miss Madigan, said her left arm is lame and injuries she suffered at birth patrially closed an eye. Police were told she was born with a spastic paralysis.

The mother of the Fitzpatrick boy regarded Miss Madigan as a good sitter who “took excellent care of the children and did extra things around the house.”

Police said there had been no other incidents involving the woman’s baby tending but that at least one family had refused to hire her because the parents felt she was “too good to the children and would spoil them.”

On the night Michael Fitzpatrick died his father and mother went to an Amvets meeting.

“Miss Madigan did not appear to be overly devoted to children,” Mrs. Fitzpatrick said. “But now as I think back to the night, she did say she had no plans for the next day, so we could stay out until 2 or 3 a. m. if we wanted to.” 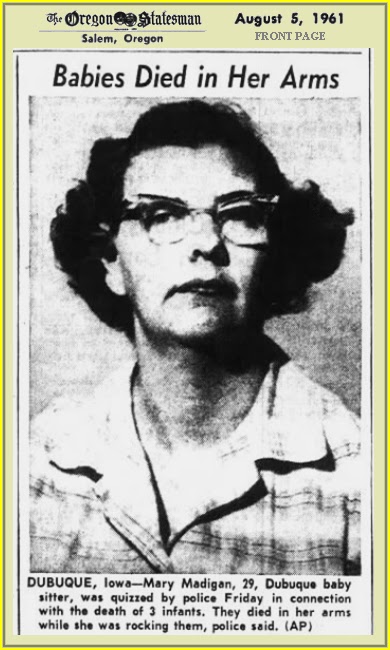 FULL TEXT (Article 2 of 2): Dubuque, Ia. Jan. 8 – Mary Madigan, 29, a baby-sitter who squeezed three youngsters to death when she thought they begged her to “hold me tighter,” was sentenced to eight years in a reformatory today [Jan. 8, 1961].

The physicians said the 192 pound baby sitter had suffered brain damage at birth and had congenital spastic paralysis and mental deficiency.

“Despite these findings, paradoxically,” the report said, she was sane but did not know the degree of harm which could come from her tight clutching of children.

The manslaughter charge was based on the death of Gail Nemmers, 3, August 4. Gail was the second child of Mr. and Mrs. Wayne Nemmers to die while under Miss Madigan’s care.

Police said she told them she picked up the children when they became “fussy” and then held them tightly to her when she thought they asked her to. In each case, the child’s body went limp.

The younger Nemmers girl and the Fitzpatrick boy were assumed to have died of illnesses for which they were under a doctor’s care. An autopsy on Gail’s death showed suffocation was the cause of the death.

Most of the parents for whom Miss Madigan had sat had only one complaint about her work – she “spoiled”the youngsters by holding them all the time. 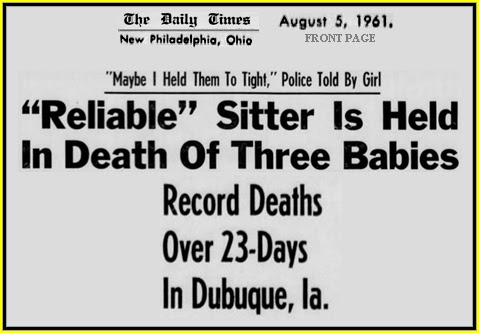 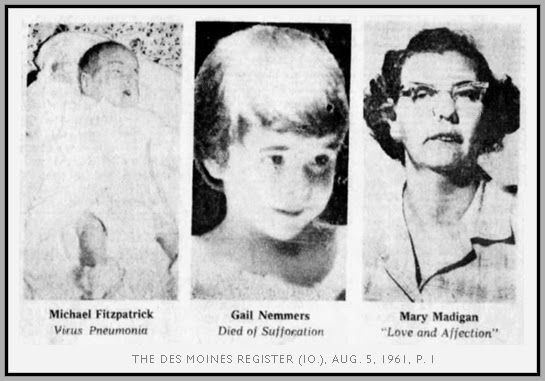 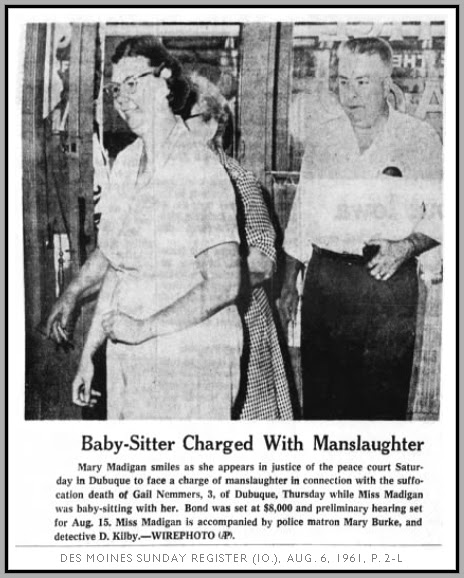 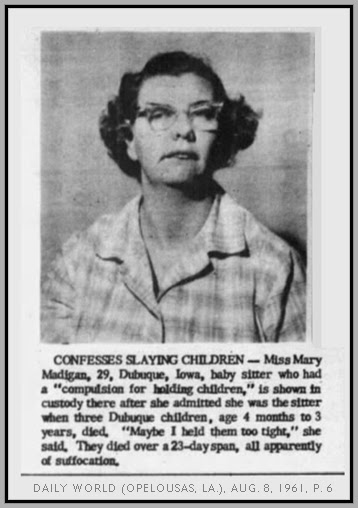