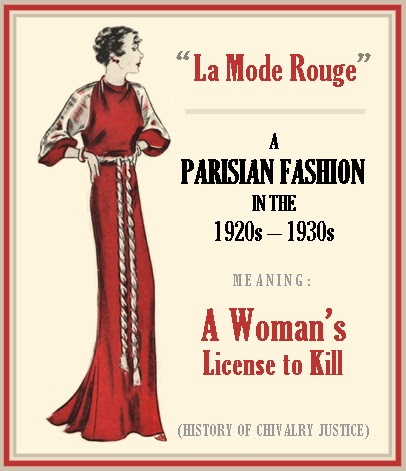 FULL TEXT: We think women kill men rather freely in this country [USA], and get away with it too easily. But our conjugal slaughter is nothing to that in France nor is the feminine immunity so scandalous.

In the last couple of months [July-August 1930] there have been about 40 feminine murderers tried in Paris Courts. In few cases was there any real question of guilt – that is, if unlawful killing implies guilt. But in every case but one the fair defendant was acquitted. The only prisoner found guilty was sentenced to two years in prison.

“The Red Mode” they call it over there. Gallantry has much more to do with it. From the masculine viewpoint it is carrying gallantry pretty far. And yet they are male juries that acquit these female killers. What do you make of it?

“Frenzied Wails of  Murderesses inthe Shadow of the Guillotine”: Chivalry Justice in 1929 France