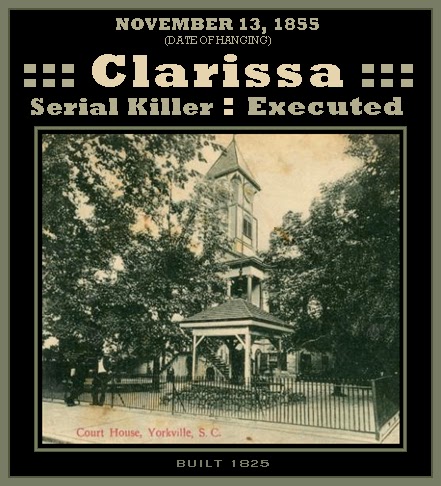 FULL TEXT (Article 1 of 2): The Columbia (S. C.) Times, of Saturday, publishes the following extract: from a letter, from a “perfectly reliable source,” in relation to Clarissa, who is sentenced to be hung for poisoning the child of Colonel Wilson. It is a fearful revelation [of] crime.

Yorkville, Sept. 20, 1855. – The negro Clarissa was tried on Tuesday and found guilty of the charge of murder, by poisoning Col. Wilson’s child. She confessed that she had also poisoned two children for Mr. McCully, and one for Mr. Marshall of Newberry, and probably one for Mr. Berry. She also confessed that she had prepared poison as often as three times for Mrs. Wilson her late mistress. She also stated that there is now a poisoner in Columbia, and that there is an old lady there, who she has not named, that is now kept in bed by poison, administered by her servant. She has proven herself so be devil on earth. Every day she is making more confessions.

FULL TEXT (Article 2 of 2): Clarissa, the colored girl that poisoned Col. W. B. Wilson’s little daughter, was hung at Yorkville, S. C., on the 2nd inst.