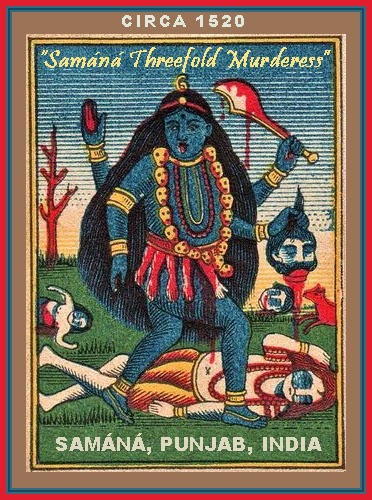 FULL TEXT: In the days of Sultan Ibrahim [reigned 1517-1526], when there was abundance in the land of Hind [synonym of “India”], a tradesman of the town of Samana chanced to be summoned from his house on pressing business, and when he departed he gave charge of his house to a trusty friend and neighbour who used frequently to visit the dwelling in order to advise and assist the wife of the absentee in her household concerns.

Becoming aware that a young and good-looking youth was frequently a visitor there, and reflecting that he could be no relation of the owner of the house, the neighbour’s mind became filled with suspicion that something wrong was going on, and in order to satisfy his doubts, he secretly pierced a hole through the partition wall which divided his friend’s dwelling from his own, and kept a close watch.

One night he saw a youth dressed in white and much scented with perfumes, enter and seat himself on a carpet near the merchant’s wife, with whom he revelled on sweetmeats, wine, and betel-nut, and at length, broke the law of Islam in most criminal fashion.

Now this female had a child, which slept in another room, and as it worried her with its wailing, she strangled the unhappy brat with her own hands, and then returned serenely to the embraces of her lover.

When interrogated by the adulterer why the child had not made itself heard for such a length of time, she coolly informed him that she had taken steps to prevent it from crying altogether.

This disturbed the young man greatly, and he said to this female fiend, “O creature, without fear of God, for the sake of a moment’s pleasure you have destroyed the fruit of your own womb; how, then, can I rely on you?”

So saying, he began to dress himself with the intention of leaving the place, but she seized his skirt, saying,” For you I have done this, and now you would cease to love me. For God’s sake aid me to conceal my shame, by digging a hole in the room wherein to bury the murdered child.”

Reluctantly did he consent, and when he had dug a grave with a mattock which she provided, she brought the child and handed it to him, and as he bent down unsuspectingly for the purpose of placing it in the hole, she raised the mattock and dealt him such a stroke from behind that his skull was split in two, and he fell dead into the grave.

Hastily covering up both corpses and carefully smashing down the earth, she began to wail and lament, exclaiming, “A wolf has devoured my child.”

Now, such a statement might have passed current, especially in the wilder parts of Hind, where it is of no unfrequent occurrence to hear of children being snatched away by prowling wolves, even in these days of Anglo-Indian rule; but, unfortunately for the scheme of this she-devil, the neighbour had been a shocked witness of the whole horrible affair from his observatory.

Still, he kept his counsel until the return of his friend, the husband, from his journey, and having invited him privately to his own house, he revealed the history of the slaughter of both the child and the youth. “Then,” he continued, “in order to prove the truth of what I relate, do you pretend that you had in former days buried some gold within your apartment, and procure a mattock to dig it up with.”

When the unfaithful woman saw that he immediately began to dig in the spot which the neighbour had pointed out to him, and knew that her dreadful secret was on the eve of being laid bare, she fastened the door of the room in which her husband was delving, and set fire to the thatch of the roof; then, with combined cunning and hypocrisy, exclaiming “Come to my assistance, for the house is in flames, and my husband in peril of his life,” she hied to the neighbours, who came all too late, for the unhappy victim of conjugal perfidy and cruelty had already been burnt to death.

The neighbour who had witnessed this fresh atrocity went with others to the Kotwal, or chief police magistrate, and told all he knew, so that search was made, and the bodies of the youth and child were brought to the light of day.

Upon this the wrathful citizens proceeded to wreak their vengeance upon “this bloody-minded woman,” whom they buried in the “bazar” up to her waist, and then goaded with arrows till she died.

And this tragedy is still known in Samana as “The threefold murder, by one woman, in one house.” 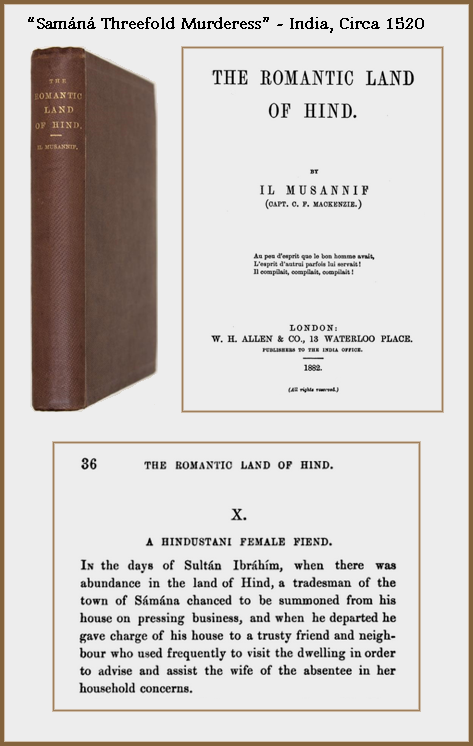