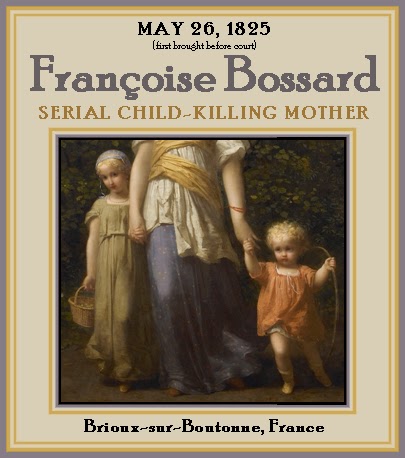 Note: This post is temporary and lacks important details. Only a partial text of the source for this case is at the moment accessible.

Brioux-sur-Boutonne, France – On May 26, 1825, he married couple Françoise Harand (née Bossard), 34, Nicholas Harand, 46, and Michèle David Harand -- the widowed mother of the husband -- were brought to court and charged with the murders of three Harand children, each victims of severe child abuse. The names of the slain children were Charles Harand, Françoise-Aimée, and Virginie.

On August 4, 1825, the jury at the court in Niort found the defendants not guilty of premeditated homicide in each of the three deaths. The brutal punishments were not deliberately intended to result in the deaths of the children.

The jury did, however, find the mother guilty of abusing the children, causing their death. The judge, named Pasigot, disgusted by the battery of the children gave Françoise Bossard the harshest sentence the law would permit, public branding with a mark of shame (“La peine infamante flétrissure”). She appealed the sentence to a higher court and lost the case on  September 9, 1825. She was publicly branded in Place de la Brêche on September 25, 1825.