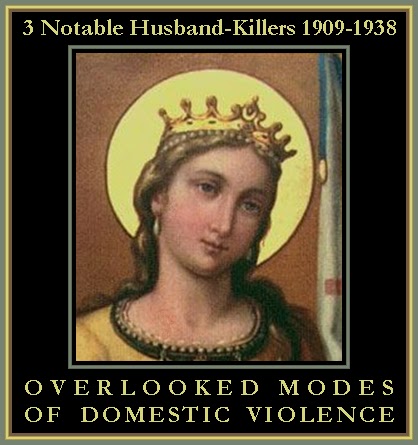 “Women are not violent.”

“Women only kill husbands in self-defense. ”

Ideologues of the fallacious social constructivist theory – really just an a priori dogma -- promote the utterly false notion that women do not commit physically brutal crimes, that the do not initiate violence, and that women’s violence when it does come about is the result of excusable “stressors” or some hard-to-prove “mental illness,” frequently of a “temporary” nature.

The fact is that very little serious study about female aggression has ever been undertaken. There are several reasons for this, including chivalry, female scholars’ fallacious gynocentric theories, and the broader “patriarchy theory” ideology that stands above modern feminism and which is not specifiically pro-female, but is rather an authoritarian philosophy that rejects due process and individual rights in favor of a utopian vision as delineated by Cultural Marxism.

The good news is that a new generation of female criminologists is coming out of the university system that includes women who – unlike their male counterparts – have the courage to reject the fallacious feminist and marxist theories of their elders and who are devoted to uncovering objective truth.

The following three cases serve as a brief anecdotal reminder that the propaganda endlessly repeated by the corrupt and profitable Domestic Violence industry has lulled us into a stupor with its wildly distorted claims, its fallacious cult-like ideological stance and its cooked statistics.

FULL TEXT: Believing her husband unfaithful. Mary Miller, of Milton, at an early hour Monday morning murdered her husband while he was asleep, by disembowling him with a razor. Miller had been out late and his wife being insane with jealousy, entered his room soon after he retired and committed the deed.

Mrs. Miller was arrested and was sent to Huntington jail. The remains of the murdered man were also sent there for burial.

FULL TEXT: Freeport, Ill., June 10 – Mrs. Vera Witte, was held to the grand jury today on a charge of murder for the killing of her husband, William, yesterday shortly after she lost a suit for separate maintenance.

She at first showed no sign of regret but today is on the verge of breakdown. It is expected that a defense of insanity will be made, as the woman was previously treated at Waterdown asylum.

Freeport, Ill., June 10 – Mrs. Vera Witte, age 30, shot her husband, William, age 55, near the county building here yesterday afternoon following the announcement of the failure of her suit for separate maintenance with a .32 caliber revolver that her husband had given her for Christmas to protect herself with when he was away at night on his railroad run.

Following the third shot, fired while the victim was on the sidewalk, Mrs. Witte handed the smoking revolver to Robert Stewart, former Stephenson county sheriff, who ran towards her, and surrendered with a calm remark of “I’ve shot my husband.” She walked with him across the street without protest where Chief of Police Adam Wilkey, took her into custody and formally charged her with the murder of her husband which may send her to the electric chair.

Shortly after their marriage in May 1930 the bride objected to visits of his two full-grown children of a previous marriage. it is said that they had considerable strife and which is regarded as one of the most cold-blooded crimes in the history of the county.

She was detained briefly in the city jail and later placed in the county jail where she shows no remorse or emotion. Only once did she sob and ask “Is he really dead?” shortly after the shooting. She was formerly married to Ralph Amoth and she is said to have shot at him in Minneapolis during a quarrel. Some months ago, on the claim she was deranged, she was sent away for mental treatment and had but recently returned.

The state charged that Mrs. Witte shot her husband, William, 53, to death in a fit of rage June 9 shortly after Judge William J. Emerson had denied her separate mainteance.

Judge Harry L. Heer said he would hear motions for a new trial next week and would pass formal sentence then, if the motion is denied.

The verdict was read before a crowded courtroom. Mrs Witte swooned and had to assisted to the county jail by deputy sheriffs, whose wives put her to bed. They reported she appeared stunned and said nothing, staring vacantly at the ceiling.

Witnesses told police that Mrs. Witte had followed her husband from the courthouse, took a pistol from a pocket in her auto and shot him once in the heart and twice in the head.

FULL TEXT: Benton Harbor, Mich, Oct. 17. –  Mrs. Patricia Holbrook, 34, shot and killed her husband, William, 42, former assistant prosecuting attorney, in front of the Benton Harbor police station early today, two minutes after she had been released from custody. Holbrook had asked police a few minutes before to “hold her awhile so she can’t bother me.”

Special Policeman Pugh witnessed the shooting. He and another officer seized Mrs. Holbrook and took her back into the station.

She refused to answer questions. “My mind was a blank,” she said.

Desk Sergeant Eugene Murphy, alone in the station at the time of the shooting, said Holbrook and his wife had quarreled at their home until early today over a visit Holbrook had made to his former wife and their two sons.

“Holbrook left intending to go to a hotel,” Murphy said. His wife followed him and he came here. He was telling me about the quarrel when she came in.”

About two minutes after Holbrook had gone, Murphy told Mrs. Holbrook she could leave.

She hurried out of the station, caught up with her husband, drew a small, four-shot Derringer from her handbag and fired two shots, hitting him in the shoulder. Then she fired two more shots, both of which struck him in the head.

Pugh was nearby. He ran up to her and grabbed the gun. She was held on an open charge pending the decision of the city prosecutor as to the charge to be filed against her.

Holbrook had been practicing law here at Kalamazoo, Mich., since 1933. Before then he was assistant prosecutor of Berrien County under his brother, Harvey.