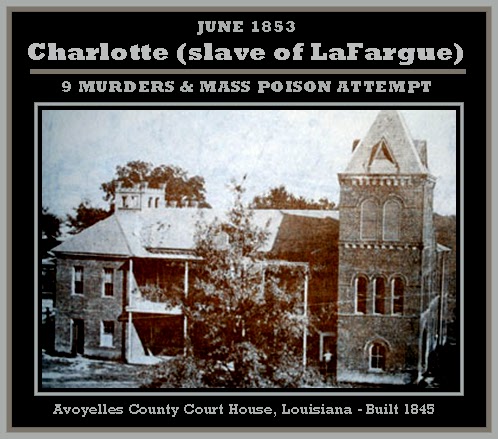 FULL TEXT: We understand that a mulatto-girl named Charlotte, aged about 17 years, who was purchased a few weeks ago by Mr. LAFARGUE, of Avoyelles, for the sum of $1050 cash, has been brought to this city, and lodged in jail on a charge of poisoning one of her master's children. Two days after the commission of this crime, another attempt at poisoning the entire family by means of arsenic infused in coffee was made, after which the slave ran-away. Having been caught by the police, she acknowledged that she had poisoned nine different persons, most of her victims having been white and colored persons in the State of Missouri. A judicial investigation of this terrible affair will shortly be had at Avoyelles, and the corpse of Mr. LAFARGUE'S child will be subjected to a post-mortem examination.