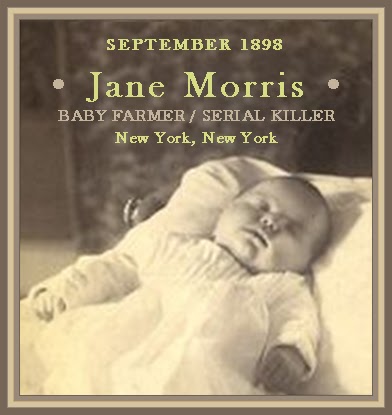 FULL TEXT: The horrors of baby-farming, as it was formerly carried on indiscriminately and without fear of the law, has been reduced to a minimum, through legislative enactments rigidly enforced by the Society. Before a single child can be received in board, the person so receiving must be duly licensed by the board of health for this purpose. On this date complaint was received at the rooms of the Society that a child was greatly neglected at No. 328 West Thirty-eighth street (rear), and where the officer found in the most miserable rooms — dark and filthy— an infant, of 3 months, whose condition as to its eyes, physical condition and cleanliness, was sickening to look upon. Its sufferings could not have been other than intense, except that it was kept in a state of constant stupor. And yet, as the officer was informed by neighbors of the baby-farmer, this child had, one month before, been received a healthy, vigorous infant.

Jane Morris, in whose custody the child was, was an old offender, and had been frequently complained against and arrested in her profession as a “ baby-farmer.” She had already served two terms in the penitentiary — one of three months, and a second of nine months—the prosecutions in each case having been brought at the instance of the Society. During the past two years five of these infant children had died on her hands, and three of these during the past year. The woman had no permit from the board of health, and could not get one.

The offender was immediately arrested, and with the child was taken before Magistrate Hedges in the Second District City Magistrate’s Court, by whom she was held for trial in the Court of Special Sessions. On September 17th, Jane Morris was arraigned before Justices Jerome, Jacobs and Hayes and convicted. The record of this woman, as known to the Society, was presented to the court, which imposed a sentence of eleven months’ imprisonment in the penitentiary and a fine of $450. The child, whose parentage was not ascertained, was committed to the care of the Department of Charities. 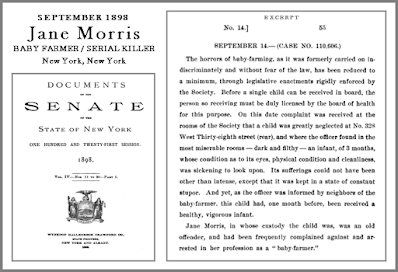