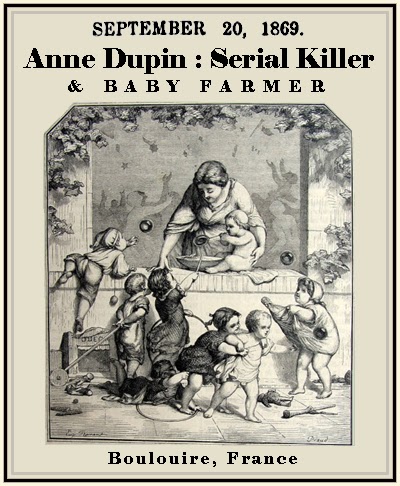 A separate post has been made for Augustine Miard (Janvier). Her name is sometimes misspelled as “Mizard” in English language sources).

FULL TEXT: By the arrival of a steamer from Europe on Saturday afternoon, we have the following news from our regular foreign files: --

The Paris correspondent of the London Daily News says: --

A great oyer of poisoning, such as has now become almost weekly reading in the French papers, occupied the Assize Court of La Mans, the capital of La Sarthe, on Friday and Saturday, and it is not yet over. The town is crowded with visitors, and a strong bevy of reporters have gone down from Paris. The crimes are alleged to have been committed upwards of four years ago; the standing conflict of medical evidence about traces of arsenic is of course, the more keen on account of the lapse of time, and the presence of the celebrated M. Lachaud as counsel for one of the prisoners is a guarantee that the trial will be as dramatic as possible. According to the indictment, M. Janvier, the landlord of the Hotel des Trois Rois, of Bouloire, in the Sarthe, who died on February 5, 1805, was poisoned by his wife, Augustine (nee Montarou), and her servant, Anne Dupin, was not only an accomplice in, but the instigator of the deed. Suspicions of foul play prevailed in the neighborhood at the time, but did not set the public prosecutor in motion. It was only towards the end of 1866, after the widow Janvier had been married a second time to M. Miard, who still keeps the Hotel des Trois Rois, that anonymous letters and handbills, supposed to have been circulated by Anne Dupin, led to her arrest and that of the other prisoner.

Augustine Montarou was married to Janvier when only seventeen, against her own wish, and under a threat from her parents that if she would not take him she should be sent to a convent. Although they lived together as tavern keepers for fifteen years, and without any flagrant quarrels, this origin of their marriage, pursuant to the French practice of rejecting no circumstance as too trivial to furnish a motive, is pressed against her as a reason why she was likely, to poison him. He drove the mail cart between Bouloire and Couterre, and evidence is brought forward to show that during the hours of his daily absence she was frequently unfaithful.

Of the servant, Anne Dupin, the indictment, by way of showing the a priori probability of her being a murderess, recounts that in 1816 her mother’s husband was convicted of theft, and that he had a sister who committed suicide in 1853 on account of an accusation that she had poisoned somebody with phosphorus. This prisoner herself was a natural child, and she had two natural children. Her profession was that of a baby farmer,, and the astounding statement is that in the course of her time, although now only forty-seven years of age, she has had 81 children to nurse from Paris, of whom not half went back alive. According to a confession made before the Judge of Instruction by the woman Augustine, but which she retracted in court, it was Anne Dupin who, one day alter she had been ill-used by her husband, put it into her head to take him off by poison. Anne Dupin got some arsenic from a farrier’s wife; but for fear that his too sudden death should excite suspicion, recommended that he should first be dosed with cantharides powder sprinkled on his food to make him ill.

This object being accomplished, and a doctor called in; Dupin took an opportunity to substitute arsenic for his magnesia. The doctor fancied that he died of cholera. In September, 1865, Madame Montarou, the mother of Augustine, was enticed to come to Bouloire, and was carried off by arsenic administered by Dupin. A few weeks later one of her illegitimate children.

Leopold Dupin, a boy of fifteen, was put out of the way by his mother for fear of making revelations. It is charged that he was poisoned with lucifer matches. The indictment further alleges that after the death of Janvier, Anne D’Ipin installed herself in the Hotel des Trois Rois, where she acted more like the mistress than a servant; that she availed herself of the terrible secret of which she was in possession to extract large sums of money from Augustine Montarou; and that when, after the second marriage of the latter In June, 1857, Miard turned her out of the house on account of her bad character, she wrote threatening letters, and posted anonymous placards, which led to the exhumation of the three bodies, and the discovery of poison in the remains. In court the prisoner, Dupin, strenuously denies everything. M. Lachaud is counsel for the other woman.