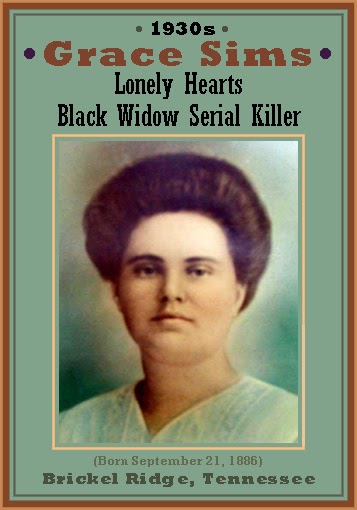 EXCERPT (Article 1 of 3): “Mowery’s family is astonishing in several ways. Not only was her grandmother incredibly resourceful and resilient, she was also a serial killer. Along with slaughtering pigs, her main source of income, she desperately slaughtered man after man, sometimes for the money in their pocket and often through the allure of love and sex. In her mind, she was simply doing what she thought she had to do to keep her farm financially viable so she could leave it upon her death to her three sons.” [Jill Zima Borski, Book review: “‘Tragedy in Tin Can Holler:’ A Terrifying True Tale,” keynews.com (Key West, Fl.), Sep. 11, 2011]

EXCERPT (Article 2 of 3): “In the early 20th century, Grace Sims was known for her exploits. She had several children by married men, sent for mail-order husbands who mysteriously disappeared once she had their money and hired vagabonds who were never seen again after working on her hog farm, according to legend. She never served time for her suspected serial killings, but she was imprisoned for mail fraud over the mail-order husbands.” [Ron Clayton, “Meigs gets Grace Sims’ prison quilt,” Chatanooga Times Free Press (Tn.), Mar. 12, 2009]

EXCERPT (Article 3 of 3): “As Grace approached her late teen years she became very rebellious and began drinking. On one occasion she was seen drunk, riding her mule through the city of Decatur wearing only her gun and holster belt around her waist. In 1905, when Grace was 19 years old, she met Cleveland Smith, a married man. She could always get moonshine from him. They became drinking buddies and partners in crime. She and Cleveland Smith were arrested numerous times for trespassing, public drunkenness, carrying a pistol, public profanity, manufacturing moonshine, and lewdness. Lewdness during that time period was unmarried couples living together. Grace never served any jail time in Meigs County. She only had to pay the fines.” [Rosetta Mowery, from Chapter 2, Tragedy in Tin Can Holler, 2007 (rev. 2009), Global Authors] 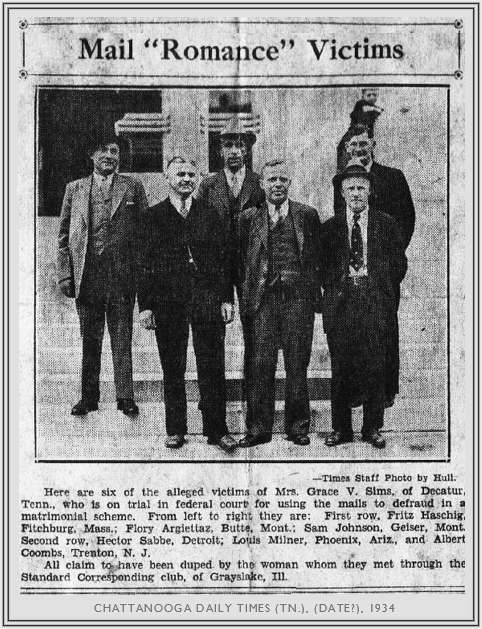 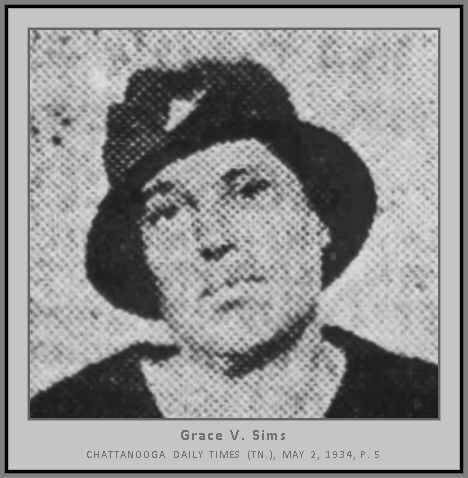 FULL TEXT: Convicted Friday [Nov. 21] afternoon of using the United States mails to defraud, Grace V. Sims, of Meigs county, will be sentenced by Judge I. T. Sanford in federal court Monday morning. The jury returned a verdict of guilty in eight of the nine counts in the indictment against the defendant. She was found not guilty in the first count, which charged that there was a conspiracy between her and her father, T. H. Sims to defraud merchants over the country.

Grace Sims is 19 years old, has lived in Meigs county practically all her life, and on the witness stand claimed that she was the mother of four children by J. M. Mowery, with whom she said she lived for about nine years, passing as his wife and looking after his business. Practically the only admission Mowery made was that he had improper relations with Grace Sims. He denied that he ever authorized her to order goods and sign checks in payment for same in his name.

One of the woman’s children is dead. The other three were present in court Saturday morning with her aged father. They are all small, the youngest being about 18 months old and still nursing, it was stated.

J. H. Daly, counsel for the woman, suggested that the woman, after being sentenced, be held in the Hamilton county jail temporarily, as it will be necessary for her to appear as a witness with the case of her father stated that his client has two damage suits which are pending in Meigs county, one for $2,000 and another for a smaller amount. One of the suits is set for trial in December.

In regard to Grace Sims’ youngest child, District Attorney W. T. Kennerly said that after the defendant’s arrest this child was taken by the police matron, Mrs. Rachael Marshall, and placed in a home and was in good circumstances when the mother repossessed it after she made bond some time later.

The three children were turned over to the police matron for the time being.

Attorney Daly asked that the forfeiture against T. H. Sims, also charged with violating the postal laws, be set aside. When Sims’ case was called two days ago it was stated that he was absent because of sickness. Sims was arraigned and entered a plea of not guilty. The district attorney objected to the setting aside of the forfeiture, explaining that the government had had trouble in that connection since the beginning of the case. He announced that Sims would go to trial at the next term of court and asked that a bench warrant be issued and the defendant taken in custody and required to make bond in the sum of $1,000.

FULL TEXT: Convicted in United States district last Friday of using the mails to defraud, Grace V/ Sims, of Meigs county, was sentenced by Judge E. T. Sanford, in federal court Monday afternoon to eighteen months in the penitentiary at Joliet, Ill. The jury found her guilty in eight of nine counts in an indictment. She was found not guilty in the first count which charged that there was a conspiracy between her and her aged father, T. H. Sims, to defraud merchants over the country.

Attorney J. H. Daly represented the woman. At the time the jury reported Judge Stanford postponed sentencing her until satisfactory disposition could be made of her three children, the youngest of which is only eighteen months old.

Grace Sims appeared very much broken in spirit, when the court passed sentenced. District Attorney W. T. Kennerly paid high compliment to be able manner in which Attorney Daly had looked after her case.

FULL TEXT: Love notes to men from California to Massachusetts in which she complained of being “lonely,” and anxious to find a ‘true blue pal,” are copied in a Federal indictment here against Grace V. Sims, gray-haired Decatur, Tenn., mother of two grown sons.

Uncle Sam’s post office inspectors charge that she was using the mail to defraud. She is held under $1000 bond.

Three inspectors got hold of five letters to five different men. In all of them she asks money with which to “come to you.”

Just how much she obtained is not known.

Here’s a copy of one of her letters to Fritz Hasching, 7 Baltic Lane, Fitesburg, Mass.

Assistant U. S. Attorney Doughty says it is a “come on” letter, that is, just getting acquainted. She asked for money in the next letter to him.

In this letter the love affair seems to have advanced to the money stage:

DEAR PAL: Your letter came o. k. Was pleased to hear from you. Am very busy trying to sell my peaches, getting 40 cents a bushel. And have to haul them 16 to 20 miles and gasoline is 19 cents a gallon.

I have been selling around home, and taking work for fall. That helps out.

I have worked so hard, thriving to get money, and I have my fare, I leave Chattanooga, Tenn., to Chicago, then to Billings, Mont., thru the parks to Cody, to Seattle, Wash., to Los Angeles, and we will meet there if you wish, as I went to visit my friends and relatives there. We will come to your place and arrange things and come home by way of Salt Lake City, Denver, Colorado Springs.

Now we want to meet and not make any blunders. I am asking a favor. Please send me $20 to help me out for eats and spending money on the trains. I never saw times so hard as they are here. Can’t get any money. Banks are closing, and people are starving.

Mr. Doughty said she didn’t make the trip. She got the $20, tho, according to Postoffice Inspector Wooten of Chattanooga.

At the same time she was sending these combination love-business notes to Milner, she was in correspondence with Sam Johnson, Route 1, Geyser, Mont.
To 18 months
It seems that this affair, also, had advanced to the $20 stage.

U. S. records here show Mrs. Sims was sentenced to 18 months in federal prison in Missouri ten years ago for using the mails to defraud.

Post Office Inspector Wooten said two or three years ago one of Mrs. Sims’ swains. Hector Saabe, Detroit mechanic, turned the traveling around and came to see Mrs. Sims “down in Tennessee.”

Mr. Saabe is said to have hot-footed it back home on the next train after losing $800 to some “men friends” of Mrs. Sims at Decatur.

Mr. Saabe later filed a $50,000 breach of promise suit against her. What disposition came of this is not known.

Her case on the indictment obtained by Post Office inspectors is to come up at the October term of court.

FULL TEXT: Chattanooga, May 2. – Mrs. Grace V. Sims, 48, was under conviction in federal court today on a charge of using the mails to defraud in a matrimonial scheme.

She was alleged to have obtained money from men to pay her traveling expenses to their homes after she had become engaged to them through a matrimonial bureau.

Convicted on five counts, Mrs. Sims was sentenced to five years on each of two charges, the sentence to run concurrently. Upon her release from the penitentiary she will be placed on parole for five years, and if this is violated she will be imprisoned for an additional 10 years, the court ruled yesterday.

Mrs. Sims testified she arranged to go west and obtained money from men in good faith. She said she was to have met one in Butte, Mont., another in Arizona and a third in California, and planned to marry one of them.

Illness prevented her from making the trip, she testified.

Mrs. Sims lives on a farm in Meigs county. 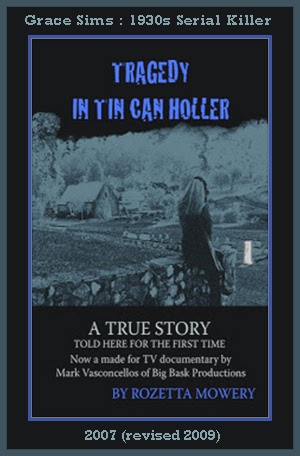