Elizabeth Wheeldon, 17-Year-Old with a Habit of Murdering Babies – England, 1867 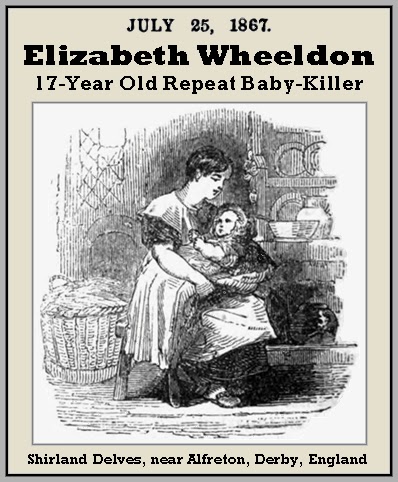 This case involves two murders on separate occasions. Because of her young age, Elizabeth Wheeldon has been included in this collection which is normally restricted to three or more separate murders.

The deceased was born on the 6th of last March. His father is a farmer at Shirland Delves, near Alfreton, in this county, and in the beginning of April his family consisted of himself, his wife, their seven children, of whom the eldest, a girl, was 12 years of age, and the prisoner, who came into their service in the end of last January. The child Joseph was of a healthy constitution. On Tuesday, the 9th of April, the mother was left at home with the deceased and the prisoner, the other children having gone to school at 9 o’clock, and the husband having gone to Alfreton at 11 to attend the County Court. After the other children had left for school the mother prepared some sago with milk and sugar, and, having taken some herself, placed the remainder in a teacup in the living-room for the purpose of giving it to the child when it had been dressed. At noon, however, as it was dressed the child went to sleep, and the sago remained unconsumed. About 3 o’clock in the afternoon the mother went out of doors to bring up some clothes to dry, leaving the child asleep on the sofa. After an absence of ten minutes she returned, and found the prisoner walking about the living-room with the child awake in her arms. Mrs. Tomlinson asked the girl who said that the child had begun to cry, why she had not given it the sago in the cupboard. The girl said she had done to, and pointed out the teacup empty. Her mistress complained that she had given the child too much, as the cup was three parts full, notwithstanding which the child appeared very hungry and took the breast eagerly. It then fell asleep, and so remained until 6 o’clock, when it woke up and was sick. After a little while it appeared better, and dosed again. Waking up a second time the child vomited again, and appeared to be in great pain. It continued to suffer until about 8 o’clock, when Mr. Turner, a surgeon of Alfreton, was sent for. On coming to the child and making inquiries, Mr. Turner was led to believe that the child was suffering from indigestion in consequence of too much sago having been given to it, and having recommended a warm bath, he left, promising to send some anti-spasmodic medicine. The medicine duly arrived, but at the interval the child had become much worse. The vomiting and purging increased greatly, the limbs’ twitched convulsively, the eyes rolled, the child struggled, then grew weaker and weaker, and finally died between 10 and 11 o’clock on the same evening. Subsequently, in consequence of suspicions excited by the death of another of Mr. Tomlinson’s children, the body of the infant was exhumed, and on the 7th of May the viscera were taken out and forwarded to Professor Taylor, of Guy’s Hospital, for examination. It was then discovered that the whole of the viscera contained arsenic in large quantity. It turned out that tome time about the middle of January Mr. Tomlinson purchased some arsenic, which had been coloured with an imitation of smalt, for the purpose of killing rats.

The arsenic was kept upon a shelf in the cellar at such a height that none of the children could reach it, but the cellar door was not locked, and any member of the family who could reach the shelf could get at the poison. After it was purchased the poison was used from time to time down to the middle of March, by mixing portions of it with oatmeal and placing it on a plate about the house or outbuildings, leaving it there the last thing at night and removing it again the next morning. Somehow or other, however, some fowls got to the plates and poisoned themselves on one occasion, and a dog did the same upon another. On the latter occurrence Mr. Tomlinson was much put about, and cautioned the prisoner and another woman who was in the house washing against the careless use of so dangerous an article. Mr. Tomlinson thenceforward discontinued the use of the arsenic, and, having purchased some mineral poison of another person, used the latter in the destruction of the rats by which he was annoyed. This poison, however, was all consumed, and the paper in which it was contained burnt, some time before the infant died. Although the use of the arsenic was discontinued its place was not changed, and it was still kept on the shelf in the cellar, accessible to any grown-up inmate of the house.

For the purpose of connecting the prisoner with the crime it was shown that she bad admitted having administered sago to the child about 3 o’clock on the day of its death, the only occasion on that day, according to the evidence of the mother, when anything was given to it except the breast, the mother having given it no other food all day, and the other children having been away from home from 9 o’clock in the morning until after the child was taken ill. The arsenic in the parcel on the shelf was coloured blue, and in the stomach of the child a similar colouring matter was found. The motive was suggested to be a desire to be rid of the trouble the children gave, and a witness was called who deposed to a conversation with the prisoner, in the course of which she expressed satisfaction at the death of the child, as it would no longer give her trouble. The most important evidence upon this point was, however, given by a witness named Matilda Webster, who was summarily convicted of stealing boots and sentenced to three months’ imprisonment in Derby Gaol on the 10th of April. This witness stated that she was in gaol when the prisoner was there, and that upon one occasion they met at the foot of the stairs leading to the prison school-room and had a few minutes’ conversation, waiting for the school-room door to be unlocked. The witness first observed that she had then only a fortnight to remain in gaol. The prisoner answered that she should be out soon after. The witness said, “Then, did not you poison the children? The prisoner said yes, she had poisoned them with some arsenic bought to kill mice with, and that she did it because they were to troublesome. The witness added that she did not know the prisoner before, and that this was the only occasion of their speaking together. Upon this part of the case one of the female warders of the gaol was called and stated that it was quite impossible that any such conversation as that deposed to by the witness Webster could have taken place, inasmuch at during her stay in the gaol the prisoner was in the infirmary, and was always let out last and accompanied by the witness to and from the school –

His LORDSHIP, in summing up, commented upon the improbability of Webster’s story, pointing out how unlikely it was that a prisoner should first state that she was about to get discharged from prison and should then go on to make to a perfect stranger a confession which, if true, could only take her from the gaol to the scaffold. The rest of the evidence bore very slightly against the prisoner, and, but for fact that she had given the sago to the child, was quite consistent with her innocence. As for the sago, if that contained the coloured arsenic, it was rather strange that none of the witnesses noticed any colouring matter either in the child’s vomit or in the cup which had contained the sago.

FULL TEXT: The inquest on the body of the second child Martha Tomlinson, aged 1 ½ years, was resumed at the George Inn, Alfreton, on Wednesday. Mr. W. Peach, from the office of Mr J. B. Smith, appeared to watch the case on behalf of the servant girl, Elizabeth Wheeldon, who, it will be remembered, was committed for trial on Friday for the wilful murder of the infant, Joseph Tomlinson, the son of a respectable farmer reading at Shirland. The father, in addition to the evidence already given, said, -- It was usual for deceased to sleep with the servant, and when she awoke for her to be sent to her mother’s bed-room, and she then went down stairs with her. On the morning when she began to vomit previous to her death, the servant girl had got her down stairs dressed very early in the morning, and I remarked, “Is there something going to happen?” meaning that I thought it strange deceased should be down stairs. Once when she was ill I looked through the window and saw she was vomiting. Her mother was not there, but the servant was there, and she took no more notice of her than she would of a dog. I told my wife, and she went to deceased, and did not leave her until she died. When I last used the arsenic there was no hole in the paper in which it was wrapped . (There was a large hole in the packet produced as though it had been broken open.) Mrs Tomlinson said she never made a hole in the paper, and did not observe one until after this came to light.

The Coroner then reviewed the evidence at some length, remarking that there was no doubt the servant girl knew where the poison was kept, and they would have to consider her conduct throughout both illnesses, and also the fact that when she was asked if she was not sorry the children were dead, she said

The jury returned a verdict of “Wilful murder,” and she was committed for trial on the coroner’s warrant.