“Epidemic of Cruelty”: Violence by Women in Global History (discussed in 1893) 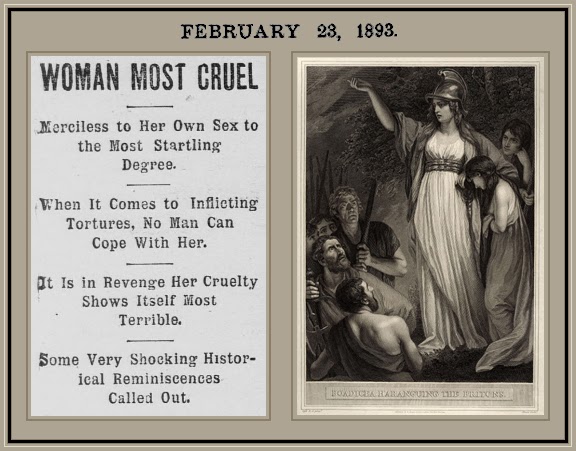 Guglielmo Ferrero (July 21, 1871 — August 3, 1942) was an Italian historian, journalist and novelist, author of the Greatness and Decline of Rome (5 volumes, published after English translation 1907–1909). Ferrero devoted his writings to classical liberalism and he opposed any kind of dictatorship and Big Government. He was nominated for the Nobel Prize in Literature twenty times in six years. [Wikipedia]

FULL TEXT: Spencer says that among savage nations the women are as perverse as the men, and if they do not work so much evil it is because they are less able to do so. This is not entirely true; doubtless women among savages are much more inclined to cruelty than to pity, but, generally speaking, woman even at the very beginnings of human evolution is less cruel than man.

Woman, even among savage nations, is rarely a warrior, says the Monist [person who makes inferences from general assumptions rather than seeking out empirical facts]. In the Antilles, the women watched over the safety of the islands whenever their husbands went to war with the neighboring island they were brave, strong, courageous, nearly equaling the men in their cleverness in handling weapons.

Among the ancient Britons armies were always commanded by women. In Dahomey the elite of the army is composed of a troop of 5,000 or 7,000 amazons, who are very ferocious, particularly in the mutilation of dead bodies, women then become tigers, is a popular saying.

Among the ancient Scots women followed the army and cruelly mutilated the prisoners. Among the Botocudos, when war breaks out among the tribes, the men tight the men with sticks, and the women fight the women by scratching and by tearing the botoques (cylinders of wood) from their ears and lips. But these are all exceptional cases.

Generally speaking, the savage Woman plays a secondary part in war; she acts as an auxiliary, picks up arrows, throws stones from a distance and carries the visions, etc. 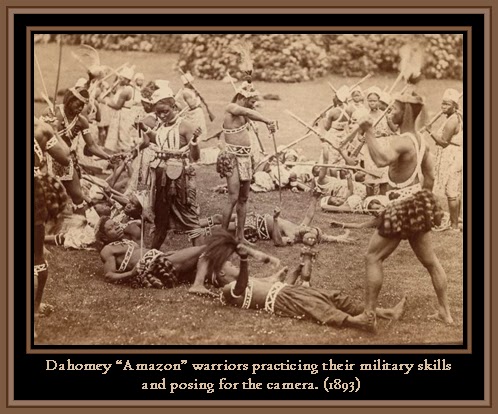 It is above all in revenge that feminine cruelty shows itself the most terrible.

Man is capable of destroying whole families or nations to satisfy a particular revenge, but nothing equals the ingenuity of woman in slowly tormenting her victim, in gloating over his sufferings and lengthening them out in order that her enjoyment of vengeance may indure [sic] as long as possible.

In Tasmania, when the black war broke out between the English and the aborigines, the Tasmanian women terribly tortured the prisoners, in order to avenge their companions who had been carried off by the English. We must also attribute to the desire for vengeance the torments inflicted by the women upon prisoners of war among the red Indians.

Elizabeth of Russia, betrayed by her lover, obliged him to marry a deformed dwarf, and to pass his wedding night in an ice palace, where the furniture and bed were all of ice. The next morning, attended by her court, she went to present the newly wedded pair with a bouquet. She found them, stretched out upon their bed of ice, nearly frozen. She then banished her rival to Siberia, first causing her ears and nose to be cut off.

A wealthy Russian prince, in love with a very beautiful girl of fifteen, took her to live with him for five years; at the end of which time, wishing to contract an alliance, he paid her a sum of money in dower and obliged her to many a peasant. The young girl made no sign for ten years, until the death of her husband; but after the lapse of that period, arising having taken place among the peasantry against the nobles, she excited them and led a body of peasants to the castle of her ancient lover, had him taken and dragged into his izba [traditional rural house], harnessed him to the plow instead of the oxen, and for three days obliged him thus to work,lashing him with the whip each time that he fell to the ground. At night she led him to the stable and made him lie down with the oxen, compelling him to eat fodder with the beasts and making merry over his sorry plight. This amusement lasted three days, at the end of which time the man fell dead in one of the furrows he was plowing.

A Russian, an idle and worthless fellow who had let his wife suffer hunger, proposed to her that she should be sold as a slave to the sultan. After some hesitation she accepted and they started out, but when they had gone about half the way, the husband having fallen asleep intoxicated, the idea came into her mind to sell him for a skive in her place. She then tied him on horse, started off again on the road and arrival at the place of rendezvous, she delivered her husband to the merchant and remained to watch the Turk push the half-awakened man into the boat laughing while he showered blows upon
him.

A young Russian peasant woman lived with a small land-owner, who betrayed her; at last she took refuge with a band of brigands, who treated her like a queen. One day she caused two of them to capture her old lover, and had him brought to the camp where she used him as a kind of living foot-stool; when she sat down she covered him with a carpet and put her feet upon him,and when she wanted to go out sue made him carry her on his shoulders. 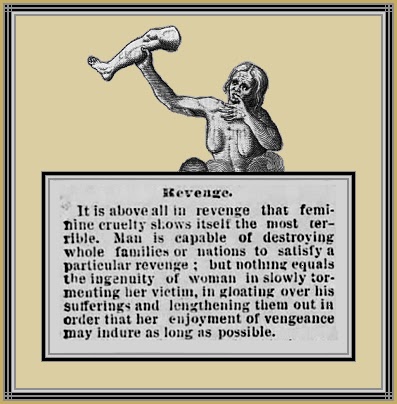 ~ Cruelty to the Helpless. ~

Woman sometimes displays the same amount of ingenuity in tormenting the helpless creatures who may be in her power. I do not know, says Bourgeval, any one more perfidious, immoral or  perverse than the New Caledonian woman. In certain portions of Australia women are mortal foes to each other. When the men wish to punish any one of them, they turn her over to her companions, who indict upon her horrible tortures. Sitting on her body, they cut her flesh with sharpened stones.

In Tasmania, as among the ancient Saxons, the unfaithful wife was punished by her companions; she was not killed, but she was tortured for a long time with sharp-pointed stones or knives, in all parts of her body.

Women have often been cruel mistresses to their slaves. A lady in Guiana, being envious of a very handsome mulatto slave, had her branded on the mouth, cheek and forehead. In the case of another slave, who was also very beautiful, she had the tendon of Achilles cut, thus causing her to become a deformed and crippled monster.

It is a notorious fact that Roman and Greek ladies often inflict most terrible punishments on their slaves, and that it was more particularly toward the female slaves, the ancilla, that the cruelty of their mistresses was shown.

The Roman Indies, if,while they were having their hair dressed, they were vexed with their attendants, used to ti.rust pins into their arms and breasts. Darwin relates that at Rio Janeiro, an old lady possessed a kind of a thumbscrew which she had had made expressly to crush the fingers of her slaves.

During periods or great national excitement, such as revolutions, feminine cruelty shows how far it can go.

The women, writes M. de Camp, were the fiercest heroines of the Commune; it was a woman who incited the assassination of the Dominicans. When the hostages were shot, they surpassed the men in cruelty; they taunted them with not knowing how to kill. When employed to seek out the insurgents, they were implacable; when acting as infirmarians, they killed the wounded by giving them brandy to drink.

At the time of the French revolution, on the day of execution, writes M. Legouve, the front rows nearest the guillotine were reserved for the women of the political clubs. They even hung on to the boards of the scaffold in order the better to witness the death throes of the condemned, and drowned the cries of the victims by their peals of laughter.

[“Woman Most Cruel - Merciless to Her Own Sex to the Most Startling Degree. - When It Comes to Inflicting Tortures, No Man Can Cope With Her. - It Is in Revenge Her Cruelty Shows Itself Most Terrible. - Some Very Shocking- Historical Reminiscences Called Out.” St. Paul Daily Globe (Mn.), Feb. 23, 1893, p. 7] 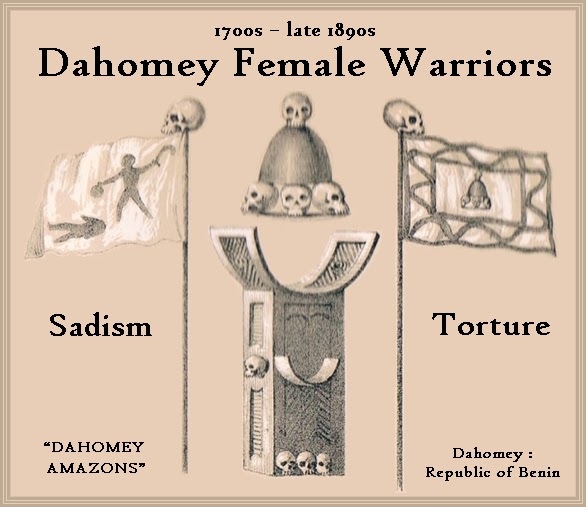 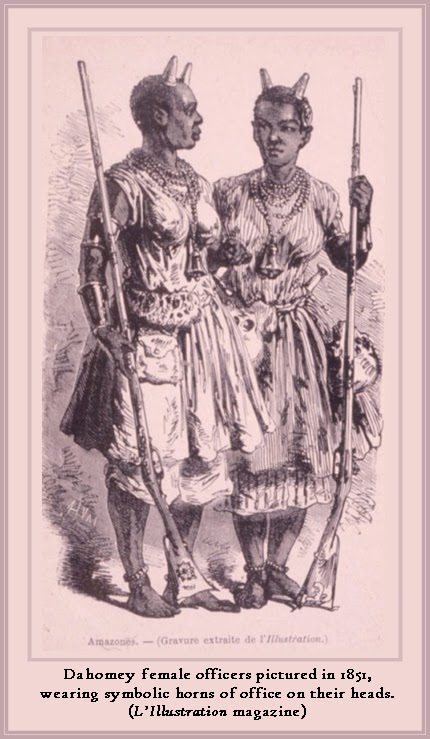 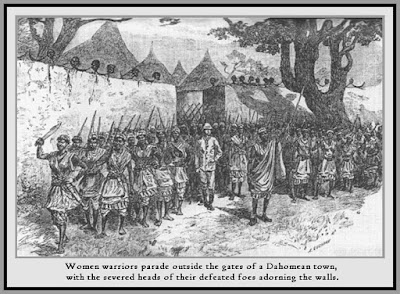 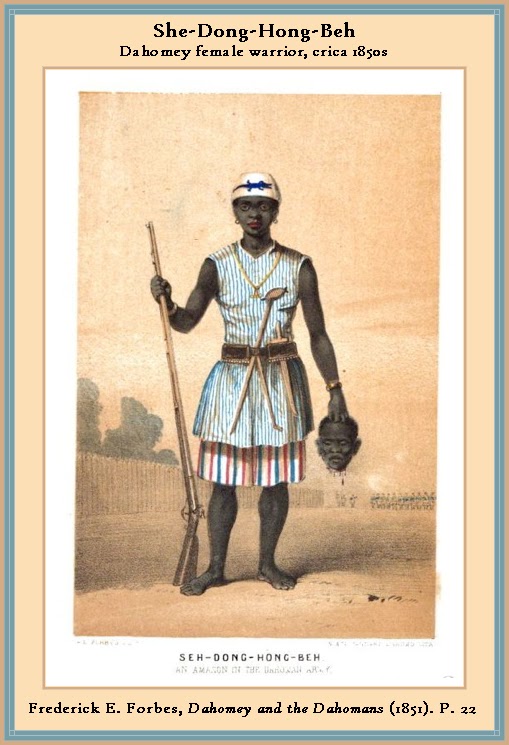 Email ThisBlogThis!Share to TwitterShare to FacebookShare to Pinterest
Labels: Cruelty (and Gender), Torture