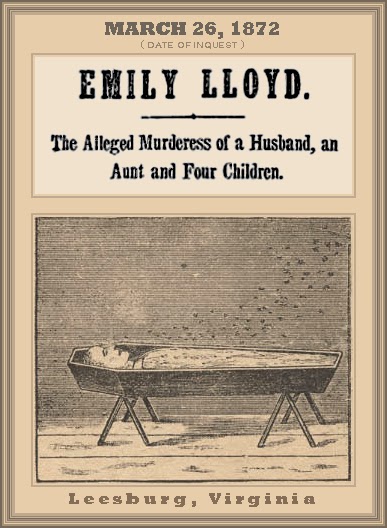 FULL TEXT (Article 1 of 6): The Leesburg (Va.), Mirror, of the 27th, says: On Monday last a little daughter of Mrs. Emily Lloyd, of this town, aged about 4 years, died alter a brief illness. About 4 years ago the father, Charles E. Lloyd, died of pneumonia leaving a wife and four children, two boys and two girls. A few months after his death the two boys sickened and died rather suddenly. Four or five weeks ago one of the girls also sickened and died, and on Monday the fourth and last child died, as before stated, after two days illness. All of the children were similarly affected, and all of them died apparently from the same cause, leaving the widow and mother to mourn the loss in four short years of her entire household treasures. On Tuesday, at the instance of R. M. Bentley, Recorder, a jury of inquest was summoned by officer B. K. Atwell, and they examined several witnesses, among them Mrs. Lloyd, the mother of the dead child, Julian A. Hutchinson, Drs. Cross, Mott and Edwards; and a negro girl in the employment of Mrs. Lloyd. 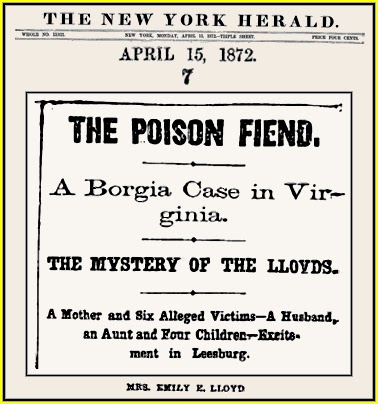 FULL TEXT (Article 2 of 6): Leesburg, Va., April 14, 1872. – On the 27th of March last this community was thrown into a state of great excitement by the announcement that Mrs. Emily E. Lloyd, a lady of respectability and means and a strict member of the Episcopal Church, was suspected of having poisoned her whole family, consisting of a husband and four children, as well as an elderly lady relative of the family, from Washington, who was visiting her.

The facts in the case, as developed at that time, were to the effect that four years ago the Lloyd family consisted of six persons – Charles E. Lloyd. Emily (his wife, the accused) and four bright, beautiful children (two boys and two girls). In the winter of 1869-70 Mr. Lloyd was taken ill with the pneumonia, and after a severe illness became convalescent, but he afterwards became worse and died suddenly.

As he was an intemperate man, no one thought strange of his death, and he was buried without a post-mortem examination. After his death the mother seemed to become intensely attached to the children. She procured for them a nurse, began to dress them nicely and accorded to them, many privileges that the stern and cruel father had denied them. She sent them out with the nurse and allowed them to go about as they desired, and it was a matter of remark among all the villagers, how devoted Mrs. Lloyd was to her family. In the summer of 1870 the two boys, aged eight and ten years respectively, accompanied the nurse to the field to gather blackberries. When they returned in the evening the children, who appeared to have been poisoned with, poison oak, were taken sick, and died suddenly. The mother seemed overwhelmed with grief at her loss, and ordered from the village undertaker his best caskets for her dead children and made the most ample and lavish arrangements for their burial.

So sorrow stricken did she appear that the whole community sympathized with her in a marked degree, and not the slightest shadow of suspicion dwelt in the people’s minds that the children had been foully dealt with. They were borne to the grave side by side and buried together. After their burial the mother seemed to dote upon the two remaining children with great fervency, and with ample means provided lavishly for their wants. She often remarked that she lived only for her children, and their nurse seemed fully as devoted to the two remaining ones as the mother. The death of the father and two boys had been almost forgotten, as well as that of an aged aunt of Mrs. Lloyd, who was on a visit to them in the summer of 1871, and their sudden demise was no longer talked of in the community, when one evening it was announced that the eldest girl, a beautiful, healthy child of some five years, had been taken suddenly ill, with much, the same symptoms as attended the sickness of the father, and the other children. The child lingered a day or two and died. Yet no suspicion attached to the mother or to any member of the household, for she was a devoted member of the church, and seemingly attached to her children. The child was buried without a thought or its having been destroyed by her hand, and time passed on until March 23, when the announcement came that the fourth and last child was sick with the same symptoms attending the sickness as had characterized the illness of all the other members of the family. It was sick but a day or two and died, but yet no suspicion came to the people’s mind that the child had been poisoned.

The evening after the death of the last child the singular fatality attending the Lloyd family became the subject of much earnest conversation all over this little village. There is a law of Virginia that requires druggists when they sell poison to note upon a register the date and person to whom sold and this subject became so generally talked of that some suggested an examination of the druggist’s books, which was done, and it appeared that but a short time previous to each of these deaths, Mrs. Lloyd had purchased an ounce of arsenic.

These and other facts induced, the Mayor, R. M. Bently, to summons a Coroner’s jury and hold an inquest, which was accordingly done, and upon an examination of the matter no satisfactory accounts of these arsenic purchases could be made, and they determined to have a post-mortem examination and submit the stomach to analyzation, to which the mother did not impose the slightest objection.

The stomach of the child was accordingly taken out, placed in a glass jar an taken to Baltimore and delivered to Professor Tonry, who was one of the chemists in the Wharton trial, to be analyzed, yet there were few people willing to believe that poison would be found. Since that date the Professor has been at work, and yesterday he informed the authorities that he had found one and a half grain of arsenic.

The Coroner’s jury were got together as soon as possible, although, it was after night when they were convened, and, after hearing the result of the analysis and some further testimony, found that the child had come to its death of poison administered by the mother. She was at once arrested and taken before Justice Wallace, but owing to the lateness of the hour she was admitted to bail in the sum of $2,000 to appear Monday morning.

It would be impossible to imagine the excitement that prevails her to-night. Orders have given for the disinterment of the five bodies of the other members of the family, and an analysis will be made in each case. The various aspects of the case are freely discussed, and the only solution yet given for the commission of this terrible crime is that she desired to remarry, and put the children out of the way in deference to the wishes of her new love. The preliminary examination will begin to-morrow, when one of the most interesting and important cases known to criminal jurisprudence in the country will he developed. 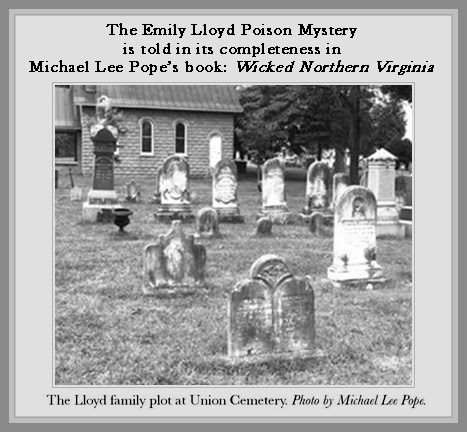 FULL TEXT (Article 3 of 6): The trial of Mrs. Emily Lloyd, on charge of poisoning her children, Maud and Anna, begins at Leesburg, Va., on the 21st inst. There is now no doubt of her insanity. She is having wearing apparel made for travelling, and expects to leave for Canada in a few weeks, where, she says, she is to be married. She admits purchasing arsenic, but declines to tell what became of the missing package. Professor Tonry, the chemist who made the analysis, will be able to show a portion of it taken from the stomachs of the children. Eminent counsel have been engaged for the State and the prisoner.

FULL TEXT (Article 4 of 6):  Leesburg. Va., Oct. 31, 1872. –  The case of Emily Lloyd, charged with poisoning her daughter Maud, came to an unexpected conclusion to-day. The arguments for the Commonwealth and the prisoner ended at twenty minutes to six this evening, Judge Keith charged the jury briefly, and after an absence of twenty minutes verdict of not guilty was returned. Judge Keith told the jury that he thought the verdict was warranted by the evidence.

There are now four other indictments for poisoning pending against Mrs. Lloyd. The jury, composed mainly of farmers, complained of the expense they were put to in attending the trial, and the great loss it was to them by reason of having to employ others to do their work at home.

FULL TEXT (Article 5 of 6): One of the jurors sworn in the case of Mrs.Emily E. Lloyd, of Leesburg, Va., charged with poisoning her children, was objected to last Thursday, for the reason that he had been heard to say he would not hang Mrs. Lloyd if she had poisoned everybody in Leesburg, because she was an old sweet-heart of his. The objection was not sustained.

FULL TEXT (Article 6 of 6): The Grand Duke of Mecklenberg habitually ships his convicts to Chicago; Laura Fair announces her intention to seek the same peaceful haven, and now Emily Lloyd, the Leesburg Borgia, is packing her arsenic carpet-bag for a residence in this unfortunate locality. Colfax, however, has reconsidered his intention to embark in journalism in Chicago. – Chicago Times. 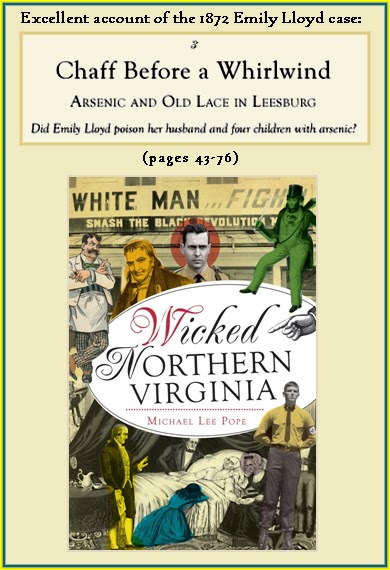 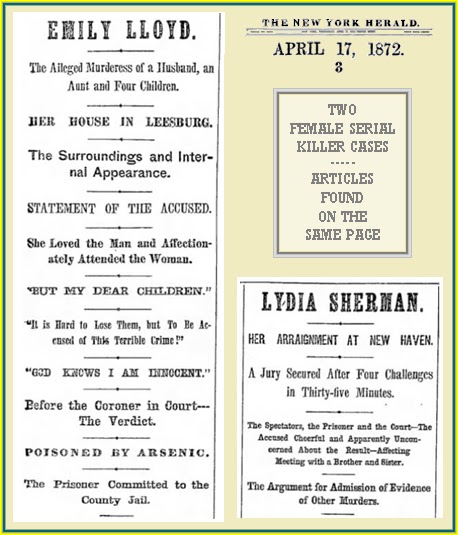