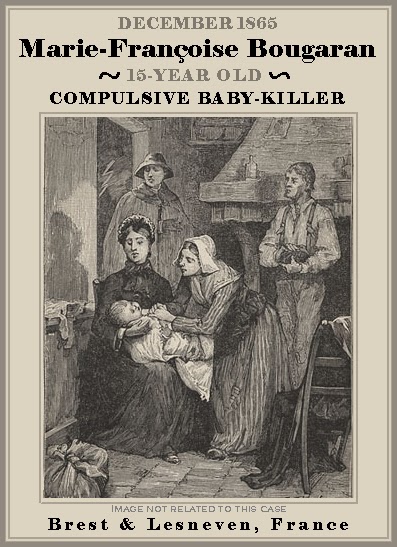 Marie-Françoise Bougaran, 15-years-old, was tried in Quimper in 1866 and convicted and sentenced to 20 years on prison.

FULL TEXT: The Brest journals give an account of the arrest of a servant girl named Bougaran, charged with the murder of three infants, the children of Mr. R— [Robinaud], Professor in the College of that place, and of one other child, the daughter of Mr. M—, clerk to the juge de paix at Lesneven [error in orig. “Lanseven”]. The first three children all died in November, apparently from a gastric affection, which caused them to vomit blood and fecal matter. A few days later the fourth child died, under precisely similar circumstances, a day or two after he had engaged the servant who had lived with Mr. R. Suspicion then arose that she had poisoned all the children, and she was in consequence arrested. When interrogated she confessed that she had killed all the children by forcing them to swallow excrements, and then cutting the veins of the neck with a knife, which she inserted in the mouth. The post-mortem examination of the poor children has fully proved this statement to be true. The girl affirms that she committed the crimes under an irresistible impulse, and that, had she remained longer with Mr. M.— she should have murdered his other child in the same manner.


FULL TEXT (Translated from French): This case is about crimes fortunately of an exceptional nature, and whose first recitations caused, when they were published, a general feeling of surprise and horror. The debates of this serious trial began at the hearing on January 13 before the Assize Court of Finistère.

At ten o'clock in the morning, the court enters into session, and the jury is drawn. The accused is introduced. Her features are regular she does not seem to understand the seriousness of the accusation that weighs on her. Her name is Marie-Françoise Bougaran, aged fifteen, born in Plabennec (Finistère), and residing there.

Me de Chamaillard, lawyer, is in charge of her defense.

The judgment of dismissal and the indictment are read. This last piece is thus conceived:

Sieur Robinaud, a teacher at Lesneven College, lived in this town with his wife and five children, the youngest of whom, Joséphine, was only eight months old. This child, of a very delicate constitution, had for some time given very serious anxiety to her parents, but her health seemed entirely restored when the Robinaud couple, towards the end of October, 1865, Marie-Françoise Bougaran, fifteen years old, became their servant. No sooner had this young girl come in to tell them that little Josephine was sick again, and succumbed on the 12th of November, after having for several days experienced vomiting in which fecal matrices were often mixed. During this illness, the girl Bougaran had pointed out to her that their child appeared to have one of her legs broken, and the doctor had, in fact, noticed in the lower part of her right leg a fracture which was to go back twelve or fifteen days.

On the 18th of the same month, Anna Robinaud, aged five, was in her turn vomited, in which were also feces, and the next day, at half-past five in the morning, her father, who slept in a next door, heard her suddenly utter a piercing shriek, and say to Francoise Bougaran, who was sleeping beside her, "You have stuck a knife in my throat.” Sieur Robinaud having at once asked his servant if she had a knife in his hands, and if she had involuntarily bled her child, she replied in a negative tone, although the latter maintained forcefully that she had put some thing in the child’s mouth.

A quarter of an hour had hardly elapsed when Monsieur Robinaud heard a second cry like the first: he got up hastily, and on entering the chamber where his daughter was, he perceived Francoise Bougaran, who was standing near  her and was removing feces from her mouth. On the 20th of November, Anna Robinaud, after having experienced vomiting of the same nature, in which blood was mixed in great quantity, succumbed towards three o'clock in the evening, and her parents, whom the girl Bouguran had gone to warn, found her body bathed in blood. Two doctors, who had been instructed to autopsy the corpse of this child, proceeded only in an incomplete manner, and attributed his death to an intestinal hemorrhage.

On of the 15th of the month, however, Henri Robinaud, who had just returned home after a few days' absence, and whose health had always been good, had felt the same symptoms as his sisters. He expelled, as they did, fecal matter by the mouth, and beginning the 23rd it was noticed that blood was mixed in. It had been noticed, moreover, a few days previously, that the right leg and the right arm had been broken, and that there were excoriations on other parts of his body. Since then he had to stay in bed for a long time, and on the 26th of November he succumbed after letting blood in great abundance by the nostrils and by the mouth. Then the Bougaran girl came again to her mistress, saying,

"Here is the little Henry who dies like his sister."

The same day, she showed the Bergat woman, who had been instructed to bury the corpse of this child; the traces of violence that he carried in different parts of the body, and a few hours later she said, returning from the justice of the peace where she was called to give explanations on the death of the Robinaud children, that he was very happy for her masters that the doctors were not going to examine the body of the little Henry because they would have had a bad problem.

On November 22, Françoise Bougaran, who was alone at seven o'clock in the morning with Marie Robinaud, aged seven, in a room where she was lying, introduced feces in her mouth, and as the child was reproaching her she replied in a loud voice, so as to be heard by Sieur Robinaud, who had immediately gone to see his daughter, and had seen Francoise Bougaran remove feces from her mouth. A few moments later, the girl having related this to lady Robinaud, in the presence of Marie, that she was ill like the others, Marie exclaimed that it was not true, and recounted what happened, but her mother didn’t want to believe her.

The next day, Francoise Bougaran, after having served Marie Robinaud a cup of coffee that she did not want to drink, and at the bottom of which were feces, gave her some jam, among which she had put some more and the child vomited again as soon as she had eaten it.

Two doctors called to care for her who then convinced the Robinaud couple to put their daughter in the hospital in order to study more easily and follow the course of an illness whose character had hitherto escaped their investigations. But scarcely had she left the house than the symptoms which had been going on for two days would suddenly cease; and Marie Robinaud was soon restored.

For several days after this, the Bougaran girl, foreseeing that she could not remain with the Robinaud couple, had offered herself as a servant to Sieur Menou, justice of the peace of Lesneven, and on November 28 entered into his service.

The next day she came back to pick up the children at school and went back to her masters when Monsieur Menou heard one of his two-year-old daughters shout. The woman Menou immediately asked Françoise Bougaran what had this child she had on her arms, she replied that she had just expelled feces by mouth, and added that she had the same illness that children Robinaud.

A doctor who was called after having invited the Menou spouses not to leave this girl with their children, they decided to send her back to her family.

The doctors responsible for the autopsy of the Robinaud children found on the body of Josephine a fracture of the femur bone in both thighs, and a fracture of two bones in the lower part of the right leg. They further acknowledged that this girl had succumbed as a result of asphyxiation. On the body of Henry they noticed on the right arm two fractures, one to the humerus, the other to the forearm; in the right leg, a fracture of two bones at the base of the soft palate there was a perforation made with a sharp and pointed instrument; in the back of the throat a section of many arterial vessels, which had  haemorrhaged and caused death. Finally, on Anna they found the same disorders in the oral cavity, and in the throat a complete section of the carotid artery. This wound must have caused death almost instantly.

At the time of her arrest, Françoise Bongaran had admitted, after some denials, that she had repeatedly introduced feces into the mouth of the children Robinaud, and that she could thus have caused their death. The same evening, in order, no doubt, to prevent the search for another cause, she herself had eaten her own excrement, and had caused vomiting which was mixed with a certain amount of blood. But after the autopsy, when she was in the presence of the corpses of the Robinaud children, she shouted, wringing her arms and seeming to be in deep emotion: "Oh! my God! I am a great criminal, it is I who sent these poor children to paradise before their time!" And then she said that on the day of Josephine's death she had inserted her fingers in her throat, had then applied his lips on hers and blew into her mouth.

She also admitted that she had plunged her knife into Henry's and Anna's throat, and added that she, too, had broken the limbs of Josephine and Henry, by wringing them hard. She only claims that she cannot give account for what impelled her to commit these attacks.

When she entered the Menon house, Françoise Bougaran brought a package containing her effects, among which were found those that belonged to the husband Robinaud. She admits to stealing them while she was in their service.

As a result, etc.

After reading the indictment, the witnesses are called.

The first witness called, Mr. Daniel, medical doctor, residing at Brest, who did not answer to his name.

The Empire’s attorney explains that Dr. Daniel has sent him a telegraphic despatch from which it follows that he has just had to treat his daughter, and a certificate from the  doctor states that his health does not allow him to go to Quimper. It is necessary that the case be postponed to the next session.

The accused and her defender declare on this point to refer to the wisdom of the court, which retires in the council chamber to deliberate.

After a moment's suspension, the court returns to session and pronounces a judgment by which, granting the requisitions of the public prosecution, it orders the dismissal of the case the next session, which is to take place in April. (Gazette of the Courts.) 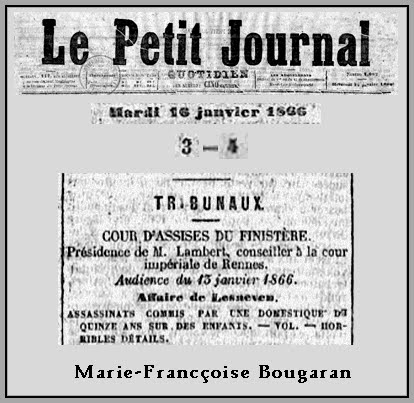 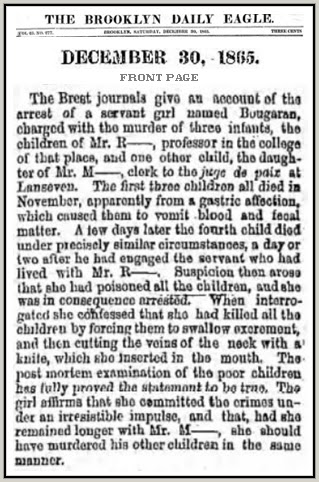 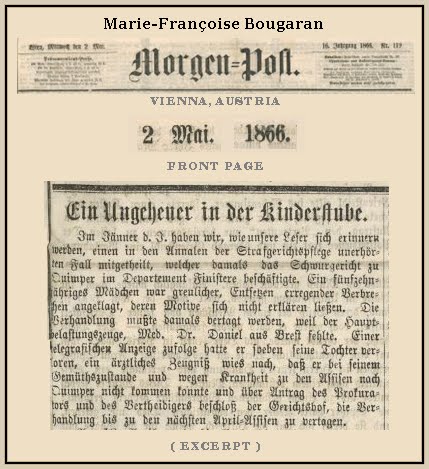 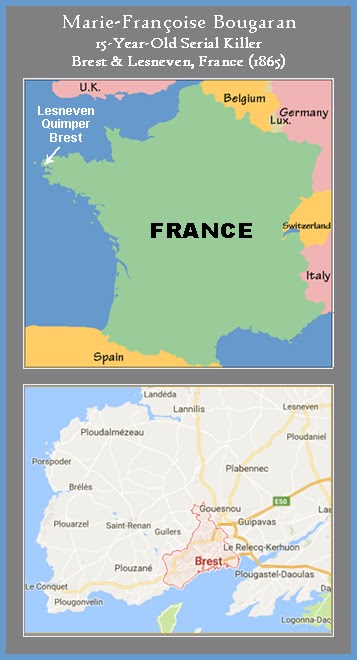 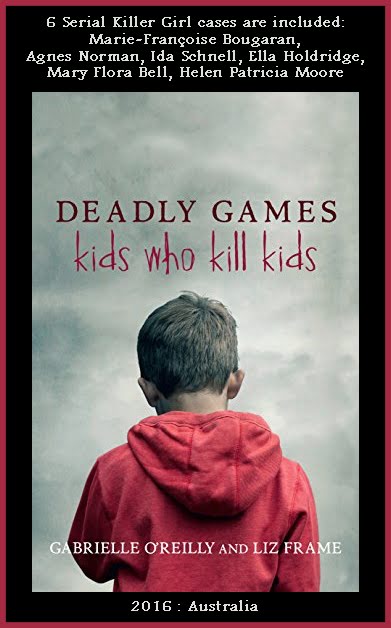