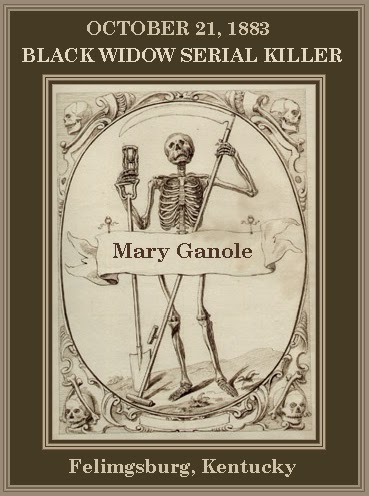 Note: Mary Ganole murdered two men and deliberately allowed the lynching of an innocent man, executed for the murder that she herself had committed. Thus in this collection of cases, we give her credit for three murders, not two.

FULL TEXT (Article 1 of 2): Flemingsburg, Ky., October 22. – On Thursday September 22, 1873, Ned Trumbo an inoffensive colored man was shot dead in his own door in this city. The assassination created great excitement and rewards aggregating $6,500 were offered fur the arrest and conviction of the murderer. Charles Hopper was arrested on suspicion but the evidence before the grand jury was deemed insufficient and he was released. James Monroe Emmons was also arrested and indicted by the grand jury but the evidence which was altogether of a circumstantial character was not strong enough to hold him. The reason of the arrest of the foregoing was that he had been paying a great deal of attention to a woman of repute named Millie Walker who was staying at Trumbo’s house. The girl was shot in Johnson county this state Monday.

Being told by her physician that her wound was surely mortal she made the following confession: “My name is Mary Ganole but I have called myself Milly Walker. I am now in my 38th year and have followed my present life since my 15th year when I was seduced by George Radcliffe whom I killed as soon as I learned of his perfidy to me and buried his body in a sawdust pile on Red river in Menifee county within three hundred yards of where his father’s house stood. When his body was found Frank Thompkin who had left the county about the time of Radcliff’s disappearance and had gone to Greenupburg Ky., was suspected and an arrest party went to capture him. He surrendered without any resistance. A mob hanged him in front of the Frenchburg jail before his trial could come on. My lips were sealed as to make a noise then was to accuse myself. I went to Flemingsburg immediately following his lynching and having nothing to live for I resolved to make life as burdensome and unpleasant as I could for the rest of mankind.

“Hopper and Emmons both were steady company of mine while I was staying at the Trumbo house and both were jealous of each other. Seeing Emmons pass one night I went to the door to call him out he either did not hear me or did not want to hear me and rode on. This made me mad and having a pistol in my pocket I fired at old Ned. Why I did so I do not know. Suspicion was immediately directed on Hopper who was thrown in jail and this suited me but I would have been better pleased if they had hanged him. I could not appear against him because I was afraid I might myself get caught. My life since then has been the usual one of abandoned women until I met George Frankson here, to whom I represented myself as good and virtuous and he seeing me in company with Doc Martmell Monday night shot me.”

The woman died last night and by her confession solves a mystery which has for five years been unexplained.

FULL TEXT (Article 2 of 2): A Fleminsgsburg, Ky., dispatch under date of October 21 says: In Johnson county, this State, last Monday night, George Frankson shot and mortally wounded Milly Walker, who he found in the company of his rival, Doc Martnell. Milly Walker has been a notorious character, and learning that her wound was mortal made a dying confession to the priest and to the Sheriff.

She said her real name was Mary Ganole, and pleading earnestly for forgiveness confessed that years ago, when fifteen years old, she killed her betrayer. His name, she said, was George Radcliffe, and she described how she had shot him while riding in a buggy with him in Menefee county. The body she hid in a cave on the banks of Snelling creek; describing the locality. Radcliffe was known to have been murdered, and Frank Tompkins, Radcliffe’s bitter enemy, was arrested for the crime. While in jail at Frendburg awaiting trial, a band of masked men broke into the prison, and lynched the supposed murderer.

The facts as recited by the dying woman are well known to the authorities, and investigation of the cave referred to yesterday revealed the skeleton of a man. The woman’s story thus received unlooked-for corroboration.

After the murder, of Radcliffe the woman removed to this city, where in September, five, years ago, she shot old Ned Trumbo dead, according to her own confession.

For this crime Charles Hopper was lynched. Before concluding a recital of her crimes: death cut short the awful list. Milly Walker has borne an unsavory reputation, but it was not believed that she had ever gone so far as her dying statements admitted. The men were certainly murdered, and it is dying woman told the truth in her confession.