Eliza Wood, Tennessee Suspected Serial Killer Lynched for a Murder She Did Not Commit - 1886 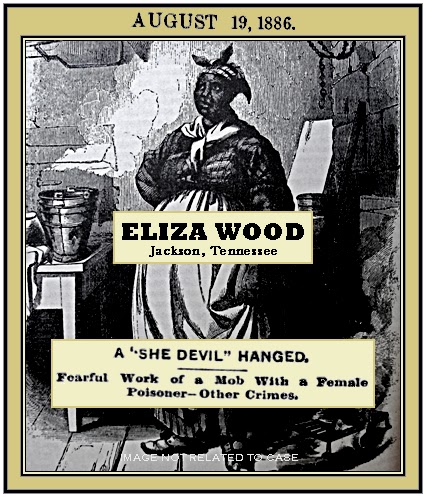 Eliza Woods ["Wood" in some sources] was charged with a crime and lynched for it before the trial could take place of which she was innocent. The actual perpetrator of the August 1888 arsenic murder of Mary Chandler Wooten was confessed to in July 1891 by the victim's widower, Jesse Wooten. [Sources: (Ida B. Wells), article, Christian Index, Jul. 21, 1888; Paula J. Giddings. Ida: A Sword Among Lions; Ida B. Wells and the Campaign Against Lynching. Harper Collins, 2009, p. 152 (p. 679, Ch. 5, n. 84)].

"ELIZA WOODS, black cook for Mrs. Mary Chandler Wooten reportedly poisoned her employer with arsenic; she was jailed but mob took her from jail, with her proclaiming her innocence. She was hanged on courthouse grounds in Jackson, August 18. It was thought that she poisoned Mrs. Wooten's baby that died last year, suddenly and also a former employer." [West Tennessee Whig (Jackson), Aug. 21, 1886; cited in “Reported Deaths In Nineteenth Century Jackson, Tennessee Newspapers,” By Jonathan Kennon Thompson Smith, © 1996

FULL TEXT: Jackson, Tenn., Aug. 19 – Several days ago Mrs. Jesse Wooten, a highly respected resident of Jackson, died suddenly under circumstances which indicated that she had been poisoned. Eliza Wood, who had been employed by Mrs. Wooten as a cook, was suspected of having administered arsenic in the food eaten by the deceased and was arrested and jailed. Mrs. Wooten’s stomach was sent up to Professor Wharton of Nashville for analysis. Professor Wharton made five very careful examinations and discovered distinct traces of arsenic. He telegraphed the result to the husband of the victim and as soon as the news was made known to the public the feeling of indignation against the accused woman became greatly intensified. Knots of men congregated on the streets and threats of lynching her were freely made. The negress was taken from the jail by a mob of 1,000 or more at 9:30 o’clock last night [Aug. 18] and lynched in the court house yard in the centre of the city. She was hanged from a limb just in front of the court house door. Five bullets were shot into her body as she swung off. Great excitement prevailed, and it was impossible to reason with the infuriated mob. At the jail the sheriff and a posse of fifteen men, which he had especially summoned, did all in their power to protect the prisoner, but to no avail. The desperate and enraged mob, with drawn pistols, broke the doors down and dragged the prisoner out into the streets amid deafening yells to the court house yard. It is due our fair city to say that everything in reason was done to prevent the lynching, but the masses were fully determined to kill a black she devil who not only killed an estimable Christian lady, but it is firmly believed has poisoned a number of our citizens who have died under very strange and peculiar circumstances, while she was living with them as cook. The most noticeable feature about the lynching was the large number of negro men and women who engaged in it and boldly endorsed it. Eliza declared her innocence to the last, and swore she did not poison Mrs. Wooten, but the proof was overwhelming and everybody is satisfied she was guilty of the dreadful crime. 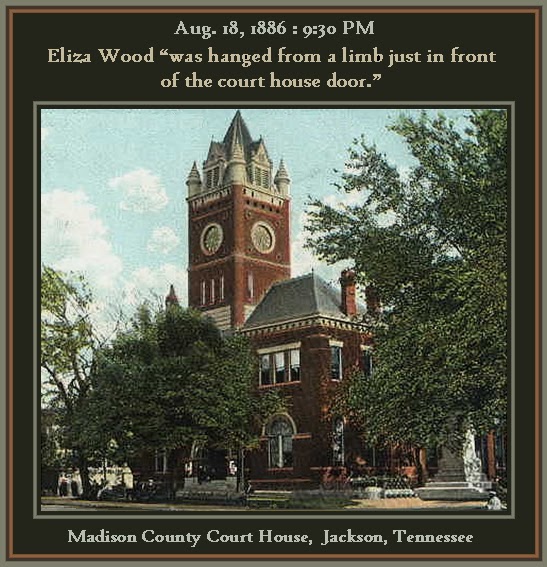