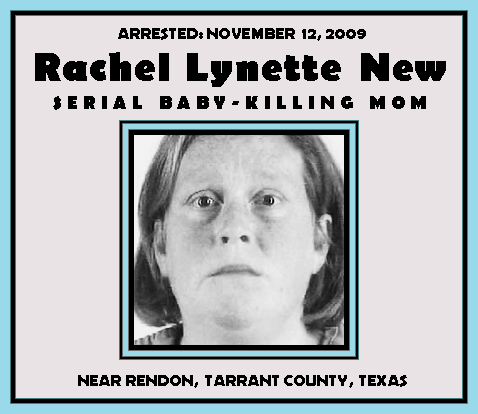 Rachel Lynette New, 36, of Tarrant County, Texas was arrested after DNA evidence linked her to three infants whose corpses were found. Two of the bodies were found in August 2009 under a mobile home that is about 30 to 40 feet from a field where a human fetus was found in a suitcase in March 2008, investigators said. The first corpse, an infant boy, was found by the mobile-home owner’s father. Rachel New and her brother had lived in the mobile home for about a three and a half years. It was known that she had been pregnant three times while residing there.
Rachel and her brother denied knowing anything about the remains. The brother has not been arrested, and it’s unclear if he’s also considered a suspect. The news report published at the beginning of the case state that there was no word on who the infants’ father is, and the investigator said it is not known whether the remains were the result of miscarriages or late-term abortions or were born alive and then killed.
[Edited from: Stacy Morrow, “Woman Arrested, Charged in Infant Corpse Mystery: DNA identifies mom of 3 infant corpses, deputies say,” NBCDFW (Fort Worth, Texas), Nov 12, 2009]
https://www.nbcdfw.com/news/local/Tarrant-County-Woman-Arrested-Charged-In-Infant-Corpse-Mystery-69922352.html
***
FORT WORTH - Tarrant County deputies on Thursday arrested a 36-year-old woman identified through DNA as the mother of three babies whose decomposed remains were found under a porch and near the mobile home she formerly shared with her brother, Sheriff Dee Anderson announced.
Rachel Lynnette New, 36, was in an isolation cell in the Tarrant County Jail on Thursday, a sheriff’s spokesman said. Bail was set at $50,000.
For now, New faces one charge of tampering with or fabricating physical evidence, Anderson said at a news conference. The Tarrant County district attorney’s office is reviewing whether to file two more charges, he said.
The owners of property in the 6000 block of Tranquility Circle near Rendon found one set of infant remains beneath the porch of a mobile home after New and her brother, Paul New, 30, moved out in August. Investigators found another set of remains nearby.
The bones had been doused in chlorine bleach.

In March 2008, the property owners found a suitcase containing bones in a field about 40 yards from the mobile home, according to an arrest warrant affidavit.

Twenty-three people linked to the News or to the property owners were asked to give DNA samples for testing, Anderson said. Rachel New’s sample showed that she was the mother of all three infants, Anderson said.

The bodies – two boys and a girl – were so “badly decomposed and compromised,” Anderson said, that forensic investigators cannot tell whether the babies were born alive and killed, or were stillborn. They have also been unable to determine who the father was.

Rachel New and Paul New have consistently denied knowing anything about the remains, Anderson said.

When confronted with the DNA results, Rachel New asked for a lawyer, and questioning ended, Anderson said.

Paul New has not been ruled out as a suspect, the sheriff said.

“We’re certain that some wrongdoing occurred here,” Anderson said. “If someone passes away, you cannot put them in a Tupperware container and pour bleach on them and hide them away.”

Investigators think bleach could have been used to speed the decomposition process or to mask the smell of the decomposing bodies, or both. The sheriff would not discuss other items found in the containers along with the infant remains.

Rachel and Paul New rented the mobile home from Rex and Auneta Southern. Rex Southern found the first set of remains, later identified as a boy with blond hair, in a suitcase hidden by thick vegetation, his wife said Thursday.

“I’m spellbound and speechless,” Auneta Southern said. “I’ve known [New] for more than three years and never had anything but nice conversations with her.”

On Aug. 23, the Southerns’ son, Justin Southern, found a cardboard box containing a set of remains under the mobile home’s front porch steps. A sheriff’s deputy discovered a pink plastic container that held a third set of remains, the affidavit stated.

Paul New had finished moving out of the mobile home shortly before that, the affidavit stated.

“We found one in 2008, and that was the most terrible thing we thought we’d ever have to live through,” Auneta Southern said.

It’s horrible enough once, but to have to live through the same story three times, it’s unbelievable. It’s like a movie. 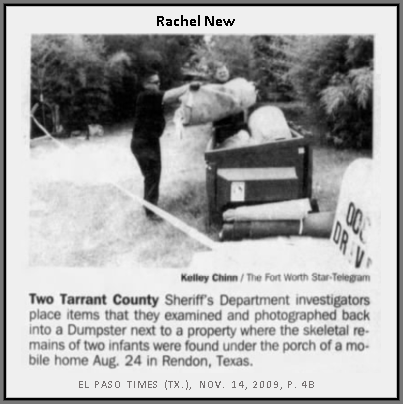 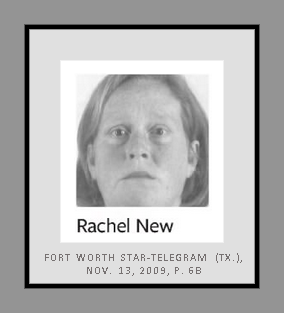 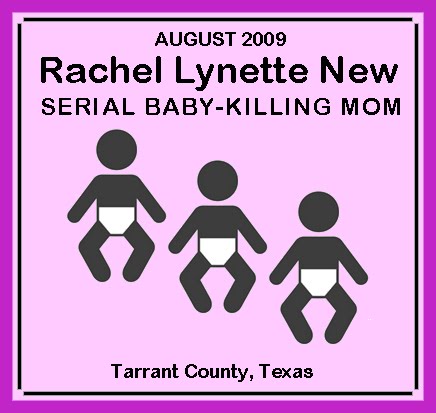