On Oct. 23, 2013 a couple in Tokyo’s Ota Ward, Hideaki and Cheimi Tonuma were arrested on suspicion of abandoning their three babies soon after their births in 2002, 2010 and 2011. The press reported that Cheimi was formerly a bar hostess. The unemployed husband’s previous occupation was not given.

The couple’s history of abandoning their children came to light in March 2011 when a abandoned baby girl was found in a public park in Ota, Japan. She was discovered and saved from death. Police conducted a DNA test on the baby and were able to use the match the genetic information that of the parents. After a two year effort the parents, Hideaki and Cheimi Tonuma, were found.

When interrogated the Tonumas admitting to a series of similar atrocious acts of child abuse. In 2003 the abandoned a the corpse of a baby son in the Saitama Prefecture. The pair filed a missing person report, presumably to protect themselves if they were found out. It is presumed the child died but the body has never been found.

In the following year (2004) the only child that the couple did not abandon in infancy, a 9-year-old son, was removed from parental custody by the court due to child abuse.

In 2010 Chiemi gave birth to her first daughter. The baby was abandoned and died of exposurre. DNA samples were preserved.

It was the surviving baby’s DNA and the two abandoned daughters, one dead ande the other alive that led to the unnatural parents and proovide the evidence needed to convict them.

2002 – newborn boy murdered; disposed of his body in Saitama Prefecture
2004 – 9-year-old son who was placed in a child welfare center after being abused by his parents.
2010 – newborn murdered. The court heard that the pair also abandoned another baby girl in 2010. The girl was found but the son’s body was never found. Police said that DNA tests on the two baby girls led them to the parents who remained elusive until their arrest.
Mar. 2011 – the couple were arrested for abandoning a baby girl who was found alive in a public park in Ota.
Oct. 30 (?), 2013 – arrested for murders.
Jan. 16 (?), 2014 – trial begins. Both plead guilty.
*** 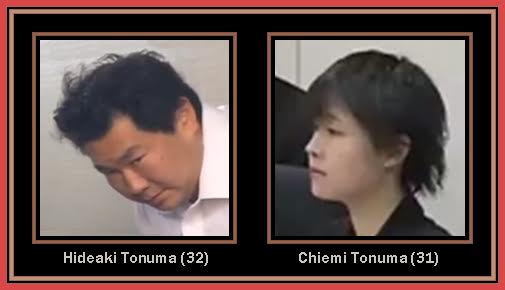