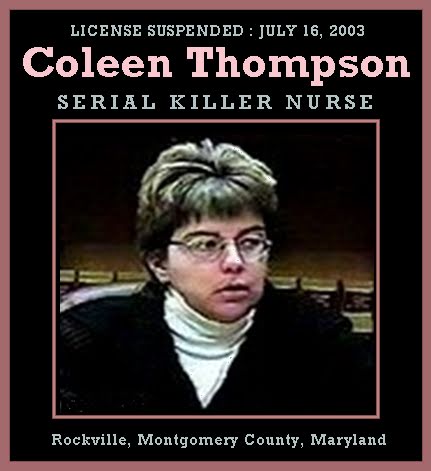 Coleen M. Thompson, as a nurse working in the intensive care ward at the Shady Grove Adventist Hospital in Rockville, Maryland, decided to play God(ess). During her 13-month tenure there 211 patients died. Following the death of a patient who has been hospitalized for pneumonia, Adela Urbana, 63, on July 5, 2003, Thompson was suspended and investigated.

It was learned that Thompson had deliberated withheld care for Urbana and at least four other patients causing their deaths.

In one instance, involving an 86-year old man being kept alive by an intravenous pump, Thompson tried to coax a fellow nurse to "allow the patient to die.” Lillian Van Zandt, 82, died after Thompson failed to give her medicine needed to stimulate her heart.  A colleague told investigators that Thompson likely had turned off the IV pump attached to 69-year-old Harry Hancock before a doctor pronounced him dead.

Thompson killed a patient hospitalized for complications from a hip replacement with a heavy dose of morphine that had never been prescribed by a doctor. Aware that the drug would certainly kill the patient Thompson made an official “declaration of death” while the patient Geraldine Baxter, 69, was still living.

July 17, 2003 a Montgomery County judge yesterday sentenced Thompson to a mere 45 days in jail for intentionally failing to care for five critically ill patients in 2002 and 2003. The prosecution had sought a minimum of five years sentence, well short of the maximum possible sentence for the five charges is 25 years. Prosecutors said there was no direct evidence that could prove that Thompson deliberately killed the patients she had died due to her neglect.. 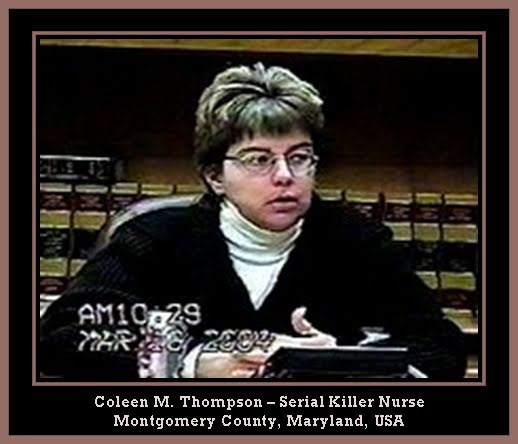