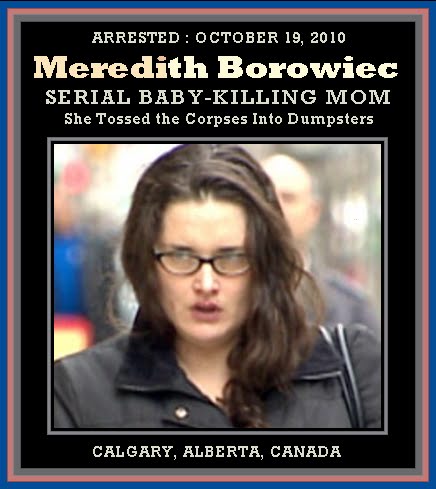 Meredith Borowiec of Calgary admitted to dumping three newborn babies into a dumpster in 2008, 2009 and 2010. She was found guilty of infanticide in the deaths of two of her babies in 2013.

On Oct. 19, 2010, Borowiec was complaining of cramps and illness. Her longtime boyfriend Ian Turnbull said he had no idea she was pregnant because she was heavy set and always had “a bit of a belly.” Later the same day, Turnbull was on his way home from work when he heard the baby crying. He jumped into the dumpster, pulled out the hours-old newborn and later learned the child was his own. Borowiec was arrested after police and paramedics found her sitting on her front steps, watching as first responders investigated.

Borowiec was originally charged with attempted murder. But police continued to investigate and eventually charged her with two counts of second-degree murder after she confessed to giving birth to two other babies and throwing them in the same dumpster. At the time of her second arrest, Borowiec was pregnant again and gave birth in custody.

Borowiec stated she had her first child in 2008 and didn’t even look to see whether it was a boy or a girl before she wrapped the infant in a towel and put it in a garbage bag. She admitted to the same scenario in 2009 when she again gave birth into a toilet in her northwest Calgary apartment, wrapped the child in a towel and dropped it into the bathroom garbage before walking out to a large bin and disposing of it.

On November 26, 2013 she was found guilty in a Calgary court.on two counts of infanticide. An appeal upheld the convictions in the higher court and again in Supreme Court.

Oct. 19, 2010 – father finds baby crying in dumpster.
Nov. 16, 2011 – interrogation, Borowiec told Det. Karla Malsam-Dudar about two earlier child births in her home where she bundled up the newborns in garbage bags and placed them in the trash.
Nov. 23, 2011 – charged with two murders.
July 2012 – while in custody at the Southern Alberta Forensic Psychiatric Centre, Borowiec gave birth to a fourth child, a boy who was given up for adoption.
Nov. 26, 2013 – found guilty on two counts of infanticide; Calgary court.
Jul. 8, 2015 – Convictions of infanticide upheld by the court of appeal, Alberta Justice confirmed Wednesday. Meredith Borowiec was acquitted of murder for putting two of her newborns in a dumpster in 2008 and 2009 and convicted of the lesser charges of infanticide in November 2013.
Mar. 2016 – Supreme Court appeal; infanticide conviction upheld. 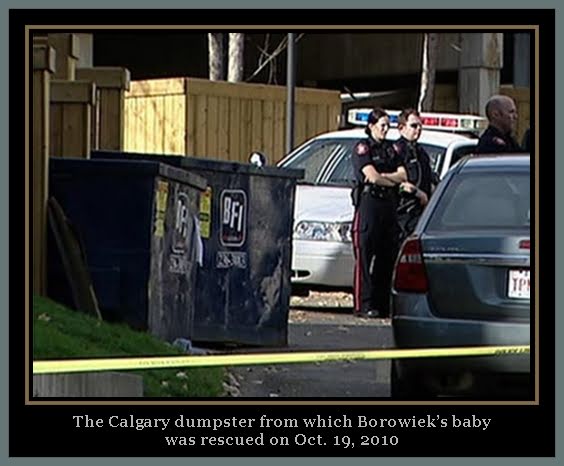