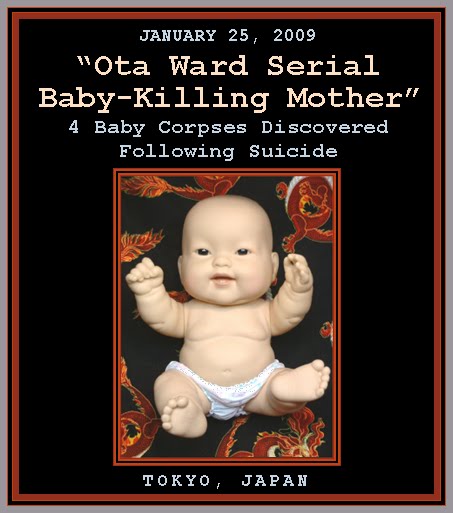 FULL TEXT: Tokyo – The decomposed bodies of four babies were found in plastic bags Sunday [ Jan. 25, 2009] in the Tokyo apartment of a woman who committed suicide last week, police said Monday. Several years are believed to have passed since the babies died because most of the bodies were skeletonized.

The 51-year-old woman, who began living alone in the second-floor apartment in Tokyo's Ota Ward more than 10 years ago, was found hanging Friday in a park in the same ward, police said.

She left a note saying, ''I have suffered from money issues. I can't pay rent any more.''

The younger sister of the woman and her husband found four plastic garbage bags in the apartment Sunday while organizing the woman's belongings, police said. When they opened one of the bags, there was a foul smell, and they contacted the police.

The four bodies were swathed separately in layers of plastic bags, police said. Autopsies will be conducted to determine whether the babies were the woman's.