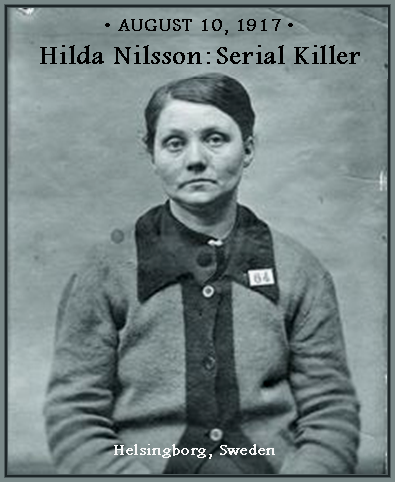 Wikipedia: Hilda Nilsson (1876 – 10 August 1917) was a Swedish serial killer from Helsingborg who became known as “the angel maker on Bruksgatan Street.” In 1917 she was imprisoned for murdering eight children. Her trial, which included a mental examination, began on 2 June 1917. At the conclusion of the trial on 15 June 1917, she was sentenced to death. She escaped this punishment by committing suicide while in jail in Landskrona. She hung herself with a linen cloth, which she had tied to a cell door. She is considered to be Sweden’s worst female serial killer.

Hilda Nilsson and her husband Gustav lived in Helsingborg, Sweden. The couple had accrued large debts and needed a way to pay their bills.

As a way to raise cash, Nilsson cared for infants in return for money from mothers who were not married and needed help. At that time, having a child outside of marriage was a shameful moral crime, and caring for these children for a fee (known as baby farming) was a common practice.

Nilsson kept her home in a good, clean condition, which made mothers more willing to leave their unwanted children in her care. However, the small sum of money she received was far from what she needed to support all the childen she had agreed to take care of.

Nilsson murdered the children she took care of shortly after their mothers left them in her care. This was possible because the authorities rarely knew of these babies’ existence. Furthermore, the mothers almost never wanted to come back to learn how their children were doing.

One method Nilsson used for murdering the children was to put them into a washtub and then place heavy objects—such as a washboard and coal scuttle—on top of them. She then left the room and returned hours later when the children were dead. The next step in her procedure was to burn their bodies. On occasions when she did not burn them, she dug graves and buried them.

Nilsson was different from other baby-farmer child killers of that time, in that she actively killed the children. Most others simply left the children with insufficient food and in unhealthy living conditions, which led to their death.

Nilsson’s crimes were discovered when a woman named Blenda Henricsson wanted to contact her child. When Nilsson refused contact, Henricsson asked the police to investigate.

The police soon found ample incriminating evidence of the murders.

Nilsson was sentenced to death by guillotine. Before the punishment could be carried out, she committed suicide by hanging on 10 August 1917.

The same day, and without Nilsson’s knowledge, the court had commuted her death sentence to life imprisonment.

She was the last death penalty prisoner in Swedish history not to be pardoned. She died before the pardon could be officially carried out.

Some sources indicate her victims may number as many as 17 children.

The Swedish word for “angelmaker” is Änglamakerskor. 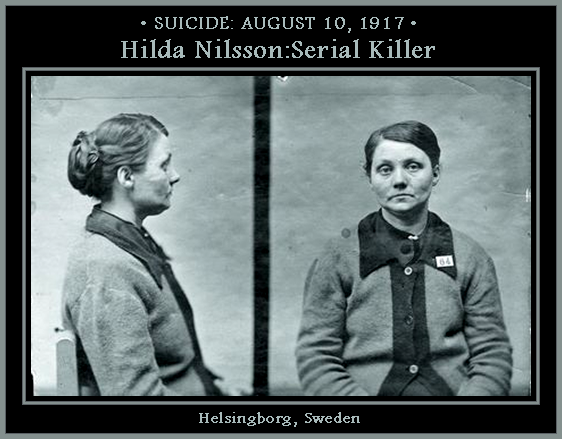