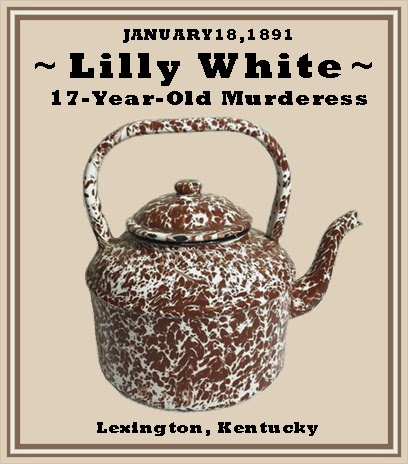 FULL TEXT (Article 1 of 3): Lexington, Ky., Jan. 11. – Lilly White, the mulatto girl, 17 years old, who poisoned and killed her aunt and her uncle, and came near killing her father, Peter White, and his wife, was brought into court Tuesday afternoon. She waived an examination and was committed to jail, to appear before the court here this month. Her father and mother are both very sick, but their physician thinks they will recover. Lilly has made a partial confession, in which she says she poisoned the family because her father whipped her.

FULL TEXT (Article 2 of 3): In Lexington on Sunday [Jan. 18] night, a negro girl by the name of Lilly White poured enough arsenic in the family coffee pot to kill all the neighbors for a block around. At breakfast the next morning her father, stepmother, uncle and aunt drank coffee from the pot. The uncle aunt died and the father and the step-mother came very near it. The girl was angry because her father whipped her for going to the wrong church and wanted revenge.

FULL TEXT (Article 3 of 3): Lilly White, the colored girl who was arrested last January for poisoning her father and step-mother and two visitors – the two latter dying – had trial at this term of court, at Lexington, with the result of a hung jury. Only one being for acquittal. This was her second trial.