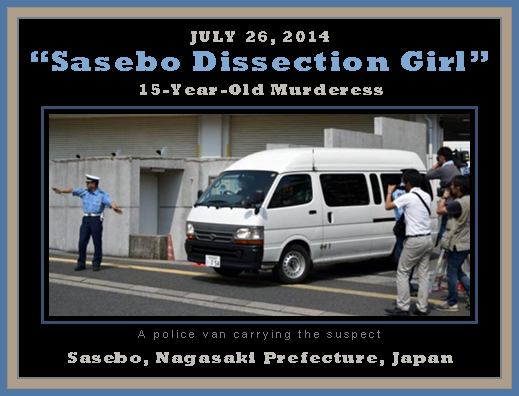 On June 26, 2014, in Sasebo, Japan, a 15-year-old girl – whose name has been withheld from the public – hacked off a 15-yrear-old female friend’s head and cut open her belly. Afterwards, the killer posted photos and descriptions of the murder on an internet message board. She was quickly discovered and arrested. She confessed to police: “I wanted to kill someone. I bought tools by myself.” She expressed an interest in dissecting a human and it is thought she first experimented on a cat, following instructions in a medical textbook.

The day before the murder her father – whom she had assaulted with a baseball bat three months earlier – had informed the daughter’s psychiatrist that the girl had told her step-mother she “wanted to kill someone,” and requested she be hospitalized. The psychiatrist did not comply with the request.

The father issued a public statements apologizing to the victim’s family for his daughter’s crime, saying it “can never be forgiven for any reason or cause.” He added that he “was losing his confidence in his ability to continue living, as (the crime) cannot be compensated” even with his own life. On October 5, 2015, at the age of 53, he committed suicide by hanging.