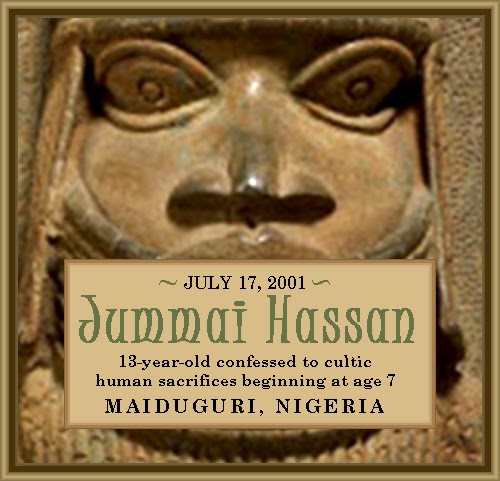 FULL TEXT (Article 1 of 2): Kano, Nigeria - A 13-year-old girl has been arrested [on July 17] in northeast Nigeria over the ritual-linked killings of 51 people, including her father, police said on Friday.

Jummai Hassan, a pupil at an army college, was arrested on July 17 in Maiduguri, the capital of Borno State, over the disappearance of a two-year-old boy, Borno State Police Commissioner Bello Uba Ringim told a radio station monitored here.

The girl, detained in Maiduguri, also spoke to the radio and said she was a member of a cult led by one ‘Emmanuel’.

“He is our initiator. We do what he says,” she said, speaking in the Hausa language used across northern Nigeria.

She said she travelled by “spirit” means from the northeastern city to the southern city of Lagos to attend the cult meetings.

“My body is here but my spirit is away. We go by our spirits but interact as normal human beings,” she said.

“We attend meetings at a church in Lagos at night where instructions are given to us as to which parts of the human body to take,” the girl went on.

“We always use a powder to kill. Once we apply it on a person, he dies and we take away his heart,” she said.

She said she had killed her father because he was an “obstruction”, stopping her from taking the life of her grandmother.

~ Burning down a house ~

“During investigations, she confessed to being a member of a cult based in Lagos and that she has killed 51 people, including her father, since she was initiated seven years ago,” he said on state-run Radio Kaduna.

But each time she was taken to court, she escaped conviction, he said.

The alert about the killings came when the two-year-old boy Ibro Joseph went missing earlier this month, he said.

When police started investigating they were told by local residents that the boy had last been seen with Hassan.

“She confessed that she killed and buried him. She took us to a grave where the body was exhumed,” Ringim said. “Surprisingly, there was no sign of any use of force to murder him.”

***
FULL TEXT (Article 2 of 2]: Following startling revelations by a 13-year-old female student Jummai Hassan, of her role in the ritual murder of 48 people, the police in Maiduguri, Borno State have exhumed the body of a boy believed to be one of their latest victims. Jummai, a student of Maimalari Government Secondary School, Maiduguri had confessed to participating in the heinous crime for about seven years. The police reported on Wednesday that she had embarked on hunger strike in custody.

NOTE: Reports of the outcome of this investigation have not yet been located. It is possible that part or all of the confession of murder(s) is fictitious. Yet it must be kept in mind that child criminals who are guilty will frequently embellish the story of their crime with fantastical elements.