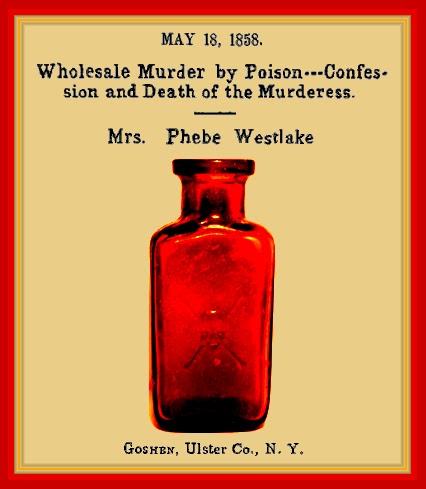 I knew and know well the parties I have mentioned. The facts in the case, not stated upon hearsay. I have learned from the District Attorney. The confession was made to Mr. Wood the pastor of the church to which Mrs. W. belonged, and by the District Attorney told to me, with a request that I should write them out for the press.

Phoebe had lived in Chester ten or twelve years. She was industrious, and knew how to do all manner of woman’s work, and was able and willing to do it well. Withal she was professedly pious. She gained friends in the best families in Chester, and when any of them needed help, they though it a loss if they could not get Phebe.

Four or five years ago, Mr. Pelser, who kept a hotel in Chester, died of erysipelas. He was a widower, and had but one daughter at home, a noble young woman, who before that time had been affianced to Hiram Colwell, a wealthy and respectable drover, well known in Orange county. She and her father’s assistant, Mr. Heard thought it best to secure Phebe, as cook in the hotel, and they did so. Shortly after Phebe came there, Miss Pelser was taken sick with some strange disease that her physicians could not understand. Her only sister and husband, Mr. Clark, were sent for, and came from the South, and took the management of Mr. Pelser’s business and property at Chester. From that time, Phebe was left to mainly nurse and care for the sick and dying Miss Pelser. She lingered and died under circumstances to induce strange suspicions, but no one suspected her faithful nurse, Phebe. About the time of her death Mr. Colwell received an affectionate letter, while he was at the West buying cattle, purporting to come from Miss Pelser, but at a time when it is known she could not write, requesting him, among other things, to remember Phebe for her kindness to Miss Pelser.

Last fall Phebe was employed as a domestic in the house of John R. Tuthill, a respectable merchant, of Chester, in view of the prospective confinement of his wife, who was the only daughter of the late Francis Tuthill, Esq. – little Martha, as all who knew her, and many know and loved her – called her. She was confined; her babe never knew life – Some unusual symptoms attended her case. Dr. Smith, her physician, said they indicated poison; but yet they might be convulsions which sometimes attended parturition. Phebe was her nurse, and she could not be suspected.

“Blossom and bough is withered in one blight.”

Mr. John B. Tuthill’s family being thus broken up – for little Martha was all he had – he went to board with his brother and partner in business, Mr. Charles S. Tuthill, and Phebe was duly transferred to the establishment as cook and maid of all work.

On the 1st of April last, Mr. Fuller, a clerk in the Tuthill’s store, took possession of John B. Tuthill’s house, under an arrangement that Mr. John B. Tuthill was to board with him. Mr. Fuller had no family but his wife. Phebe was thus thrown out of employment, but still she retained temporarily between Mr. Tuthill’s and Mr. Fuller’s Phebe [has] done many acts of kindness for both Mrs. Tuthill and Mrs. Fuller, and carried delicacies to and from them.

On the 6th of April last Mr. Fuller had provided for dinner a can of preserved corn and beans. They were not all eating at dinner. Phebe was at Fuller’s. – After tea, and after Mr. Fuller that the corn and beans might spoil, and they might as well eat the little that was left. Mrs. Fuller consented, and Phebe brought up two small plates of corn and beans, one of which she ate herself, and the other Mrs. Fuller ate. – That evening Mrs. Fuller was taken sick, with symptoms indicating poison. She died shortly after. No one could be suspected. Her husband loved her. He had no one else to love. Phebe was kind, obliging, assiduous and affectionate, and remained by Mrs. Fuller to the end. Who could suspect her?

After the death of Mrs. Fuller, Phebe remained temporarily at Mr. Charles S. Tuthill’s, where both the brothers perforce brought into the family. Some ten or twelve days ago both the Tuthills and the wife of Mr. Charles S., also a Mrs. Derrick – an Irish woman –   with whose husband Phebe had some difficulty about porterage, were taken sick, with symptoms nearly akin to those of  Mrs. Pulser, little Martha and Mrs. Fuller. They have all been treated on the hypothesis of poison. The brothers Tuthill are out about their business. Mr. Charles S. Tuthill is doing well, and Mrs. Derrick is still dangerously ill.

Suspicions began to thicken about Phebe. Last Monday she was taken violently ill with the same symptoms. On Friday morning she died. In her last agonies she said, “She had sprinkled a little arsenic on John B. Tuthill’s toast; that she knew there was poison on the window sill near his soup; and it might have blown in; and that she sprinkled a little arsenic on Mrs. Fuller’s corn and beans,” and further said not. The grave has closed over Phebe and her victims. No more of the facts will probably ever be known. Her motives will be left to conjecture, and imagination must fill up this tale of horrors.