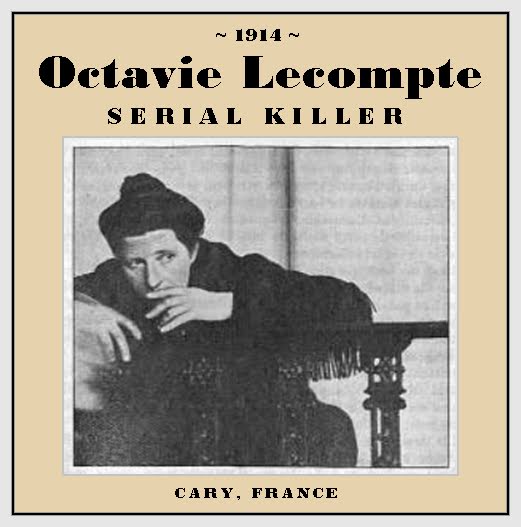 FULL TEXT (Translated from German): The jury in Paris yesterday sentenced the 85-year-old farmer’s wife Octavie Lecompte to death. She was convicted of her next relatives in three cases of poisoning. After poisoning her father and brother with cyanide, she also tried to get her sister-in-law out of the way. However, the incident was prematurely discovered by chance.

FULL TEXT (Translated from French): Douai, May 4th. The Assize Court of the North, with a sentence of capital punishment, debates a case of poisoning, which takes on a character of particular gravity. May it be a woman who laughs to dispatching her father and her brother by pouring them drinks in which she had put a poison of a rare violence.

On January 14, Jean-Baptiste Lecompte, a sixty-year-old farmer on the Ràperie farm, which he was farming with his daughter Octavie, suddenly succumbed.

The neighbors seemed very surprised at this death, which nothing could predict, because the sexagenarian was in excellent health. Nevertheless, the doctor who was called thought he could attribute this death to a natural cause.

However, an event of the same kind, which this time moved justice, was taking place at the same farmhouse in La Ràperie.

On January 21, 1914 Jean-Baptiste Lecompte, known as “Jules”, aged thirty-three years, who had come after the death of his father, took direction of the farm, succumbed in turn after a short and terrible disease.

This time, the attending physician formally refused to issue the burial permit.

First questioned by the gendarmerie this young woman made formal denials, but the information establishes almost immediately that both father and son Lecompte had both fallen suddenly and seriously ill, after drinking coffee prepared for them by Octavie.

~ The confession of the guilt ~

It was discovered that a pharmacist of Maretz had delivered to the accused a veterinarian’s prescription, 300 grammes of arsenious acid. The poison had been obtained under the pretext of killing rats, thanks to a false letter signed by Wargniez, the name of an uncle of the accused, a letter that she had sent to the vet by a servant. Octavie Lecompte was forced to confess the truth.

She admitted to having poisoned her father and brother, but attributed the crime to a motivation other than the one who had guided her. She claimed to have wanted revenge for the brutality she was subjected to. But it will be seen, such were not the feelings that agitated her.

The autopsy of the two victims and the chemical expertise, moreover, made it possible to assert that her father and brother had been poisoned by ingestion of arsenious acid. Finally, the bottle containing the poison was found and found that it only got 75 grams of this substance while the pharmacist had delivered 300 grams.

The deceived woman says that she only has to exert herself once upon each of the victims of poisoned milk; but it appears from the statements of the witnesses, in particular from that of Alfred Lecompte, that on several occasions the patients took the hands of the accused of coffee and herbal tea, and that their condition worsened almost immediately.

Lecompte father and son were honest and hard-working farmers, who had the only fault, at the expense of Octavie Lecompte, of wanting to prevent him from indulging in his taste for expense, waste, and debauchery.

Deplorable information was collected about her: natural mother of two children, she was sentenced, on March 19, 1908, by the court of Saint-Quentin, for abandonment of an infant.

To satisfy, in spite of her parents, leaning for disorder and expense, she resorted to the most fraudulent means: purchase, credit of merchandise, counterfeit bills, letters falsely signed by the name of her uncles; she had even committed, to the detriment of her father, the theft of a sizeable sum and tried to blame her brother, which had caused him to leave his father’s home.

The daughter Lecompte was examined at the mental point of view by an expert physician who, in the report, concludes that the accused was not in a state of insanity at the time of the crimes, but that there is reason to to consider her responsibility as attenuated, because of certain psychological defects.

~ The accused before her judges ~

Octavie Lecompte is a banal peasant woman with an expressionless face. When, surrounded by gendarmes, she enters the courtroom, tries to hide her face and seems very troubled.

The Court President specifies, in detail, the accused’s past. The daughter of a hard-working farmer who, eighteen years ago, bought the Rasp farm at the age of seventeen had a child, and no one in the country had any idea that she had a relationship with a friend, so that we never knew who to attribute the paternity of the child.

The good harmony did not reign, not always in the paternal house. The accused’s father and brother were sometimes a little mean to him, but they had a good heart and did not care about Octavie Lecompte’s conduct.

The President then recalled under what circumstances Octavie Lecompte left the paternal home to position himself, how she committed a first swindle of 138 francs to the detriment of a cooperative. Larumeur public again accused him, a little later, of having stolen 1,300 francs of clothing from his employer, Mr. Evrard, at Liancourt.

Relations with a farmhand then compelled Octavie Lecompte to finish the farm at Evrard; She went to Petit-Fresnoy. The birth of a child frightened her and she was laying the newborn baby in a church in Saint-Quentin. This child abandonment earned him five hundred francs suspended fine.

Later, in 1910, five hundred francs were stolen from Father Lecompte.

Q. – You were the author of the robbery and you prepared a staging to accuse your brother?

We come to the crime. On the 11th of January, M. Lecompte dad went to Clary to pay some debts, but these are stronger than he suspected, and in the evening, on his return home, he makes just observations to his daughter.

President. – The scene was terrible and it is from this moment that you decided to get rid of your father.

The charged. – Ah! if I had known what I was doing, I would not have done so.

The relation of the circumstances in which the servant of the farm, furnished with a letter falsely signed by the name of an uncle of Octavie Lecompte, obtained from M. Laude, a veterinarian at Maretz, an order which enabled him to obtain 300 grammes of milk. Arsenic at M. Vilain, a pharmacist in Maretz, is causing a sensation. The accused merely approved and said that she did not understand what she was doing.

As early as the evening of January 12, Octavie Lecompte uses the poison she possesses and, at different times, serves milk or poisoned herbal tea to her father, who dies two days later. It was thought that he had succumbed to a crisis of uremia, but in the evening of his father’s funeral Octavia made compromising remarks about his brother. Jules returned to his place on the farm. “In eight days,” she said, “there will be another! “

Two days later, the brother fell ill after taking a cup of coffee and succumbed to. his turn.

What is the motive for this double crime? Question mark to which the accused refrained from answering.

~ Octavie Lecompte is accused by her daughter ~

We go to the hearing of the witnesses; two depositions are to be kept: that of the uncle and that of the accused’s own daughter.

The first, Mr. Alfred Lecompte, owner at Clary, makes, with emotion, the story of the death of his poor brother. “This death seemed funny to me,” he said, and I asked the doctor if there had not been a little poisoning. The witness praised the deceased who was very hardworking and had an excellent heart.

The witness recalls the scams committed by the accused. This one, which since for a while, listening, hiding his face in his handkerchief, rose furiously.

- All these are lies! cries she.

Miss Zoé Lecompte, the daughter of the accused, is introduced; she tells that her mother administered coffee and herbal teas to his grandfather on several occasions, and the absorption of these liquids was always followed by vomiting.

The witness frankly states that his mother was constantly buying coffee and liqueurs, which she consumed with neighbors; then Zoé Lecompte praises her grandfather, who was always good to her, but she reproached her mother for being brutal to her: “She was beating me,” she said, and even tried to hit me with a knife several times. “

The girl repeats the threatening remarks made by her mother following the death of Father Lecompte: “In eight days, there will be one more. After that, we’ll be quiet, and Gaston Leroy will come! “

Gaston Leroy is the father of the second natural child of the accused.

Zoé Lecompte finally recalls under what circumstances his mother committed a burglary, in 1910, to the detriment of his father, and prepared a staging in order to make believe his brother’s guilt.

The charged. – You lie, we got your head up.

The witness. – I tell the truth.

The other statements do not add any new element of appreciation.

After a merciless indictment, the defendant’s lawyer tried to move the jury. He could not do it: they reported an affirmative verdict on poisoning and parricide and dumb questions about her extenuating circumstances.

The court could only pronounce the death sentence. The decision is that Octavie Lecompte will be executed in a public square of Cambrai and that it will be conducted to the scaffold in a shirt barefoot and the head covered with a black veil. 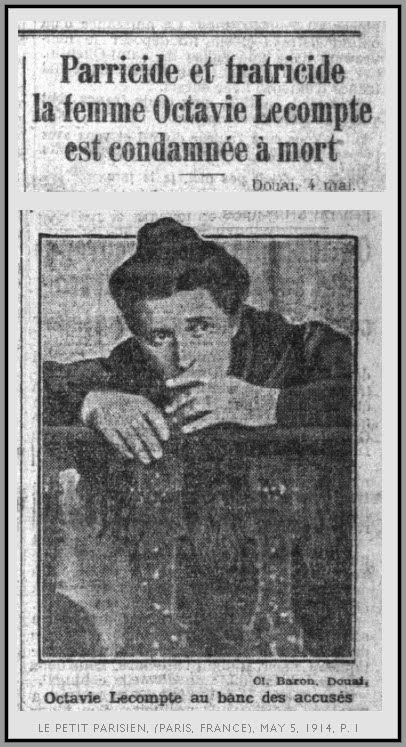 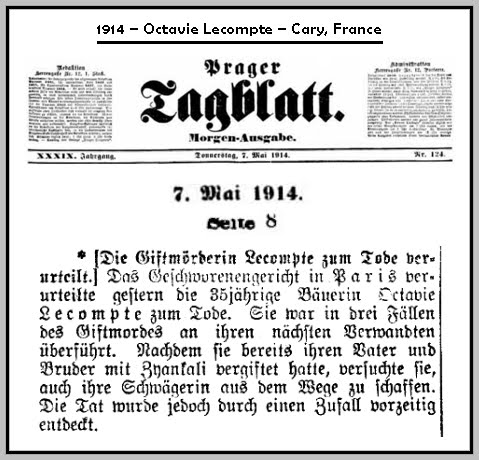 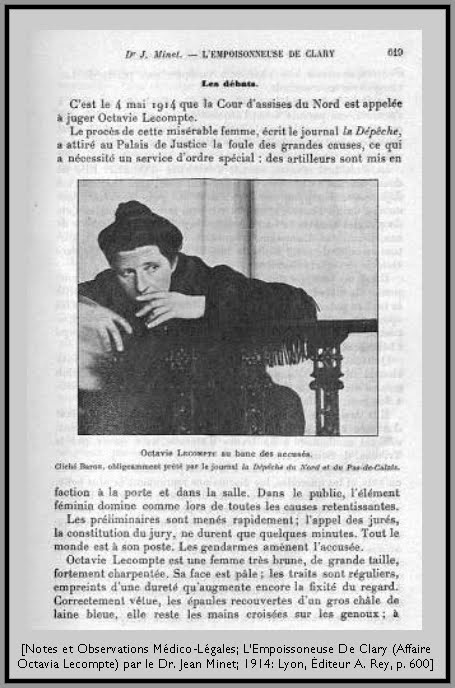