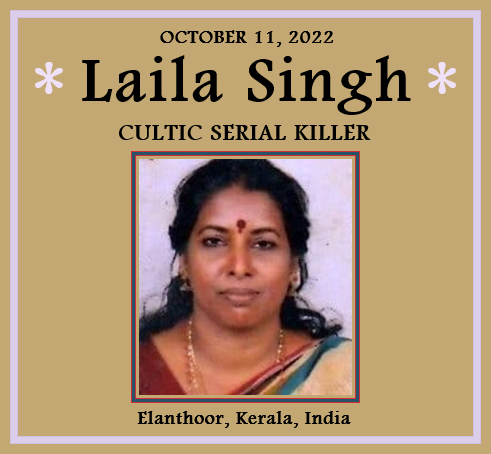 In the state of Kerala in South-West India, all three members of a menage-a-trois (two men, one woman) have been arrested for two separate sadistic ritual sacrifice human sacrifice murders (Bali) of women, Padmam (52) and Rosly (49). Additional murders by the group are suspected. The killings took place at the Singhs’ home in Pathanamthitta.
The instigator of the crimes is Shafi Muhammad, (alias Rashid, 52), a menial laborer and convicted rapist who had served time for raping and mutilating the genitals of his 75-year-old victim.
Shafi befriended the couple, Bhagaval (68) and Laila Singh (59), who became his accomplices in 2019 through a Facebook ad for “godman Rashid” (a godman is, in essence, an Indian witch doctor) who offered means to financial wealth. In their correspondence Shafi expressed an interest in Haiku poetry, a strong interest of Bhagaval’s. Murder cases involving a godman instigating human sacrifice, often of a child, a seen regularly in the Indian press.
Shafi’s godman magic involved in engaging in sexual intercourse with Laila while he husband watched.
Laila Singh is accused of murdering and beheading the second victim Roselyn Varghese (“Rosly”) on June 6, 2022. The couple had lured her by offering to pay her Rs 10 lakh (US$12,000) to act in a porn film. The trio gagged her after tying her hands and legs to a cot. The police report states that Bhagaval Singh the tortured and killed her, slicing her throat to let the blood drain out.
Bhagaval Singh is accused by police of chopping off Rosly’s breasts “for consumption.” The genitals were mutilated in the same fashion as the victim Shafi had served time for raping. Police regarded the mutilations as a sign of ritual human sacrifice.
The woman named Padma was brought to the Singh couple’s house on September 26, 2022, at about 4:00 pm after having been offered Rs 15,000 (US$182) for sex. When she requested her payment, the trio garroted her with a plastic rope until she passed out. Later Shafi finished her off by slitting her throat to let the blood flow out and then inserted his knife into her genitals. The gang then proceeded to dismember the corpse – slicing her into 56 morsels. The genitals were mutilated in the same manner as Rosaly’s. Padma’s remains were buried in multiple pits near the Singhs’ home.
For his godman services Shafi earned at least Rs 3 lakh (US$3,640) in cash from the Singh couple, it is said. His wife of 25 years is quoted as stating: “We have been married for 24 years and I’m not convinced he is capable of such a gruesome crime.”
Police had gotten their first clue to the disappearance of Padma from examining CCTV footage. Police began an investigation following a missing complaint filed by Padma's son at Kadavanthra police station in Ernakulam district on Sept 26. Kochi police commissioner C. Nagaraju told NDTV that there was "some inkling that they consumed human flesh but we are yet to get evidence of it". He said that the accused had confessed to the crime.
[Robert St. Estephe, Oct. 16, 2022]
***
CHRONOLOGY
Perpetrators: Bhagaval Singh (68), Laila Singh (59), Shafi Muhammad, (alias Rashid, 52).
Jun. 6, 2022 – Roselyn Varghese, Rosly (49) murdered. Laila Singh is accused of murdering and beheading Rosly.
Sep. 26, 2022 – Padma (52) murdered. Shafi is accused of killing Padma, a lottery seller from Dharampuri in Tamil Nadu. Elamkulam, Kochi.
Oct. 11, 2022 – Laila Singh (59), arrested.
***
SOURCES
Barbie Latza Nadeau, ”‘Throuple’ Accused of Torturing, Killing, and Eating Women to Get Off.” Yahoo News,  Oct. 13, 2022.
Bobins Abraham, “Kerala Human Sacrifice Main Accused Is A Sexual Pervert, Was Arrested For Raping A 75-Year-Old,” IT, Oct 12, 2022.
“Kerala 'human sacrifice' case: 61 packets of body parts found, masteremind a sadist,” The Times of India, Oct. 13, 2022.
“Kerala Human Sacrifice: Mohammed Shafi inserted knife in the private parts, chopped off the breasts of the victims; was out on bail in a rape case,” pIndia, Oct. 13, 2022.
*** 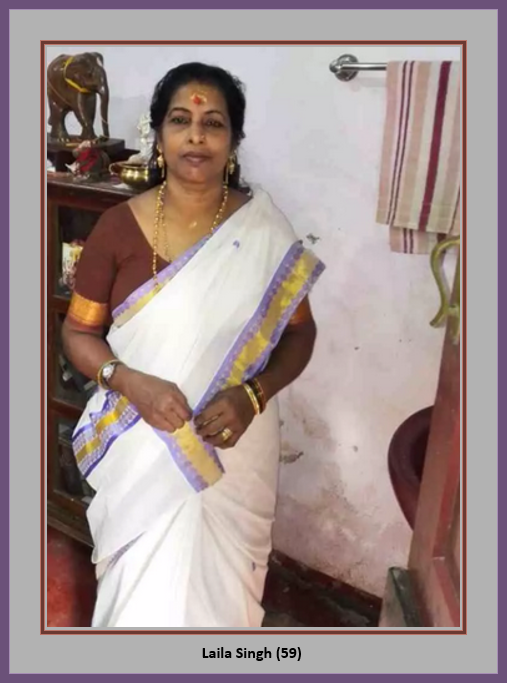 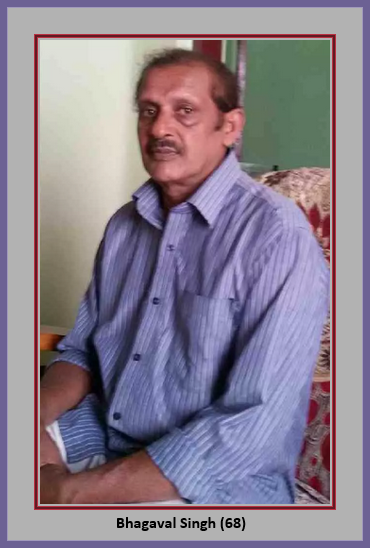 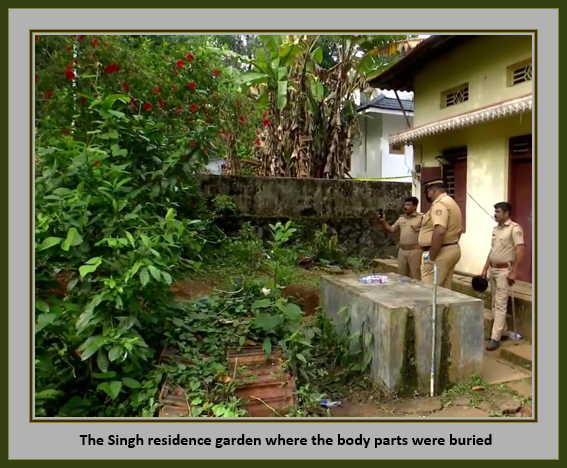 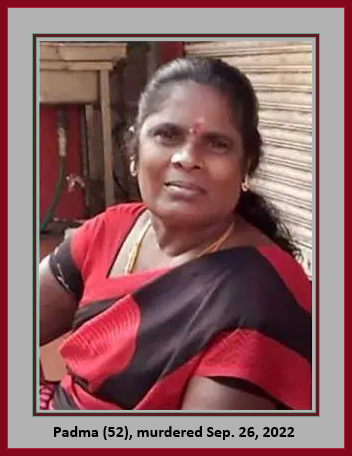 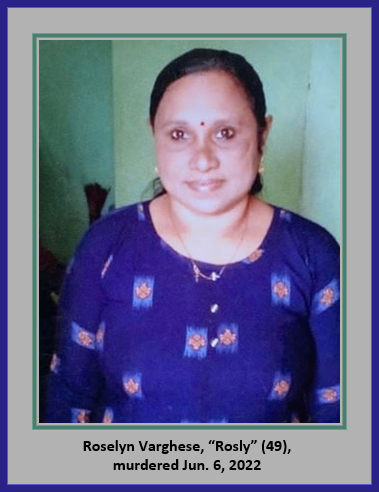 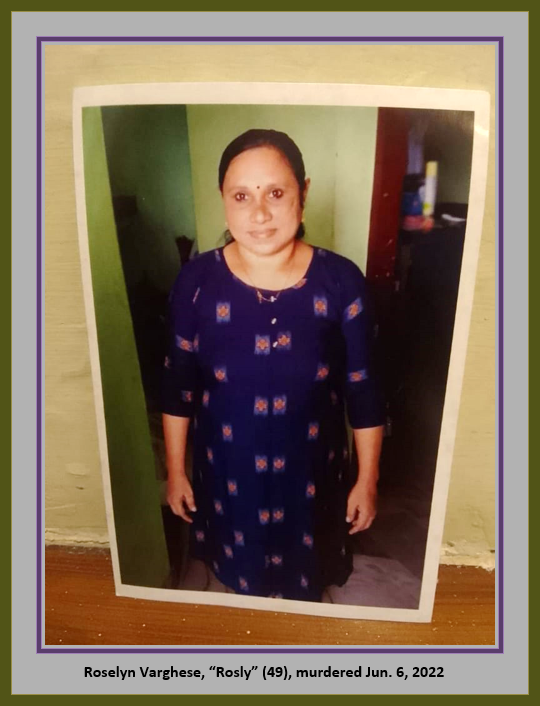 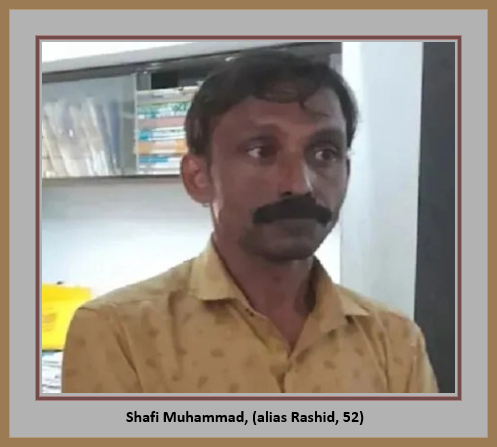 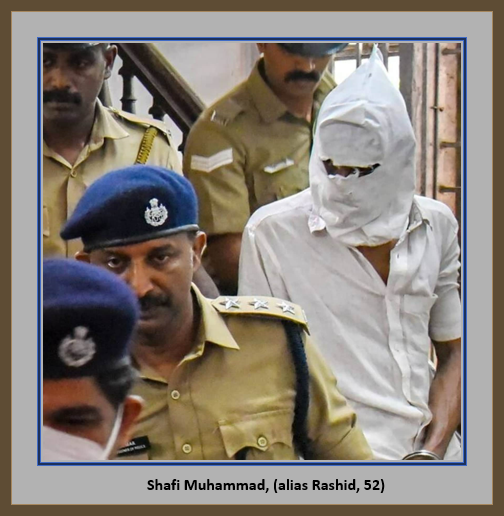