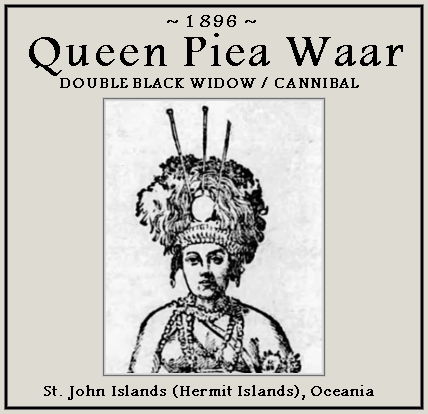 FULL TEXT: The following is taken from a New York paper:  – Any man who wants to be king of a cannibal island, and to rule over 2,000 dusky subjects, has only to go out to the St. John’s group of islands in the Southern Pacific, and to offer his hand and heart to the Queen. Her name is Piea Waar. The Queen is looking for a husband, and she is not over-particular about his qualifications. The reason she is not married is that there is no man among her subjects, who are all women. These astonishing facts have just been related by the captain and crew of the American ship Bonanza, which arrived recently at San Francisco.

~ Promised a Cargo of Bridegrooms. ~

The Bonanza was blown out of her course, and put into the St. John's group of islands for water. They  are near the Solomon Islands. The ship was invaded by a horde of dusky beauties, who swarmed over the sides and began to select husbands from among the crew. But for the prompt measures of Captain Bergman, in dismissing the women and prohibiting any man from leaving the ship, his entire crew would have deserted, and he would have been unable to navigate his way back to civilisation. As it was, he was only enabled to get away by promising the women of the St. John's Islands that he would ship a load of young men and return to settle down and furnish enough husbands to go around at the rate of 1 to 16.

“The Queen,” said Captain Bergman, “is a very remarkable woman. She is tall, muscular, and of a commanding presence, and she would attract atten tion anywhere. As she is the absolute monarch of all she surveys, including the surrounding reefs and atolls that are unsurveyed, she would be a great prize for the lucky man who might win her dusky heart and not bloodless hand. Since the disappearance of all the men on the islands her nature has become greatly softened, and she now pines, as do her maidens, for the presence of the dear departed. It was whispered that she had made a ragout out of one or two of her husbands who had not lived up to her expectations, but no white man need fear any such fate. One charming characteristic of these women is the absence among them of jealousy.”

~ Only Themselves to Blame. ~

Captain Bergman says that the women, who are now miserable because of their loneliness on the St. John Islands, have only themselves to blame for their plight. Queen Piea Waar ruled with an iron hand and became a sort of amazon, waging war with woman troops upon other islands in the group. The women always outnumbered the men on these islands, and for some reason the female warriors were induced to make a war upon them. Only a few hundred men were left when the natural result of this war became apparent. Then a halt was called in this senseless war fare. The Queen had killed two of her husbands, but every effort was made to pacify the men who were left and to make them comfortable. Among themselves, however, they came to the conclusion that too many women were even worse than too few, and so they took the first opportunity of making their escape. A French barque dropped anchor there a year or two ago, and the men on the island made a deal with the captain to take them  to South America. They stole aboard one night, and in the morning they were gone. Since then no ship has landed at the island until the Bonanza was accidentally blown in there recently. By that time, the women had realised the full horror of their situation, and were willing to make almost any terms for husbands. Many of the women are said to be beautiful. 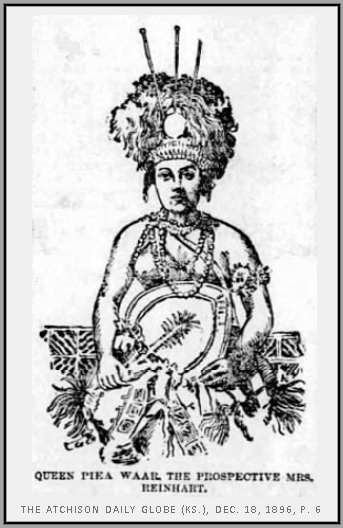 FULL TEXT: L. J. Reinhart, a San Francisco carpenter, is tired of leading a hand to mouth existence in America, moreover, he is inspired with a romantic desire to relieve beauty in distress. Therefore he is trying to raise a body of men to undertake a novel colonization scheme. His plan is to buy a vessel, equip it and sail to the St. John or Hermit islands, in the south Pacific ocean, where no inhabitants are left but dusky belles killed by cannibal wars or taken away by conscienceless blackbirders.

Most of the women are without husbands, as only a few old men are left on the islands, and they will welcome a large number of men who wish to leave behind them the cares of the civilized world and take up the indolent life of an ocean isle.

Captain Bergman of the American steamer Bonanza recently sent the news to San Francisco of the peculiar condition of affairs on the Hermit islands. He said that his ship was blown out of its course and anchored one day close to one of the islands. He was astonished to see none but women on the coral reef, for it was hardly more than that.

The women swam like mermaids to the ship. They told of the condition of affairs in the island and wanted the captain to leave some of his sailors. They said they would heap upon them all the honors of dusky royalty if they would but take their residence among them.

The natives of the island have always been known as cannibals, and the sailors mentioned this as a reason why the offer was reluctantly declined. But the visitors assured them that their days of human flesh eating was over. Men were too scarce to be sacrificed in any such vulgar way.

Reinhart declares that it is not the report of the husbandless women that has moved him to project his enterprise. He says it is dissatisfaction with the condition of the labor world and the desire to lead a peaceful existence without having to struggle day and night for bread and butter. He wants to form a republic on co-operative lines. He says as it is in the south seas the islands support the natives with very little work. By combining forces and pooling interests he believes this proposed band can have all the comforts of life with little labor.

Reinhart, like many other carpenters, has been able to get very little work lately, and he is disgusted with the situation. He is uncertain what the future will bring forth, and he thinks happiness and ease can be obtained in the manless Eden in the south Pacific ocean. He was already secured the co-operation of several men like himself, and he expects to gain fully 50 or more to his proposition in a short time.

The scheme is for 50 men to put up $25 each. With this money he expects to buy a schooner and provision her for the voyage and at least a year’s stay on whatever island it may be decided to settle upon. On first landing they will build a fort and then take seeds in a few years they ought to be exporting great quantities of south sea island products.

Notwithstanding his protestations to the contrary, it is shrewdly suspected that Carpenter Reinhart aspires to the hand of Queen Piea Waar. Her majesty, according to Captain Bergman, is a very remarkable woman. She is tall, muscular and of a commanding presence, and she would attract attention anywhere. As she is the absolute monarch of all she surveys, including the surrounding reefs and atolls that are unsurveyed, she would be a great prise for a lucky man who might win her dusky heart and not bloodless hand.

Since the disappearance of all the men on the islands her nature has become greatly softened, and she now pines, as do her maidens, for the presence of the dear departed. It was whispered that she had made a ragout of one or two of her husbands who had not lived up to her expectations, but no white man need fear any such fate. The St. John’s natives acknowledge a liking now and then for a bit of native flesh, but white men’s meat, they say, has such a salty flavor that it is unpalatable. 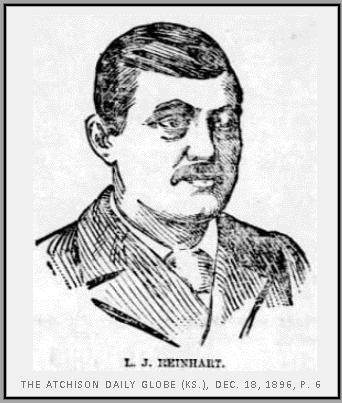 The Hermit Islands are a group of 17 islands within the Western Islands of the Bismarck Archipelago, Papua New Guinea. Their coordinates are 1°30′S 145°4′ECoordinates: 1°30′S 145°4′E. The first sighting by Europeans of Hermit islands was by the Spanish navigator Iñigo Órtiz de Retes on 29 July 1545 when on board of the carrack San Juan tried to return from Tidore to New Spain. He charted them as La Caimana (a female caiman in Spanish). When passing by, Ortiz de Retes reported that some negroes got near the ship who flung arrows by hand without bows, that were made of flint suitable for striking fire. These islands belong to Micronesian outliers. [Wikipedia]

For links to other cases of woman who murdered 2 or more husbands (or paramours), see Black Widow Serial Killers.
***