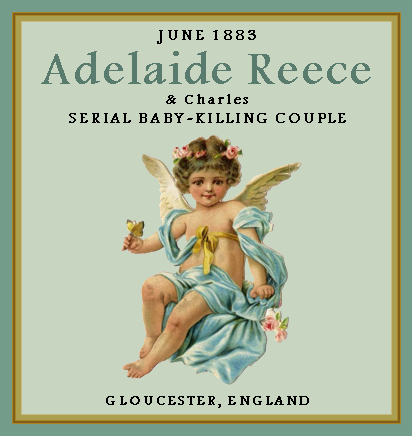 FULL TEXT: The prisoner Charles Reece, who is charged jointly with his wife, Adelaide Reece, with the willful murder of the infant child of Mr. and Mrs.  Hancock, of New-street, Gloucester, surrendered to his bail in answer to the charge before the bench of city magistrates on Friday. A large crowd assembled in the vicinity of the court-house to see Mrs. Reece, but were disappointed, as the female prisoner was not taken to court, it having been arranged that no evidence should be offered that day. A formal remand was taken, and the male prisoner was again admitted to bail, Mrs. Reece being remanded at the prison in the afternoon. The case will come on again next Friday, when the evidence of Police-Constable Howes, who found the bodies in the garden, and Mr. A. P. Carter, the surgeon who held the post-mortem examination on Mr. Hancock’s child, will be taken.

FULL TEXT: Adelaide Reece, midwife was charged at the Gloucester Assizes yesterday, with the willful murder of the infant child of Mrs. Hancock. Eight bodies of infants were found buried in the prisoner’s garden, but the judge, after hearing evidence of murder or manslaughter. – The jury convicted prisoner of concealment of birth. Sentence was deferred.