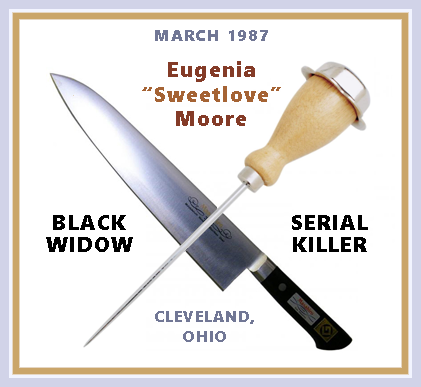 FULL TEXT: Cleveland – A 67-year-old woman nicknamed “Sweetlove” who had already served time for killing two of her husbands has admitted to using a 5 ½-pound steel bar to beat to death her male roommate, authorities said.

Eugenia Moore, 67, was arrested last week and is being held in Cuyahoga County Jail in the death of L. C. Wright, 35. He was killed March 8 while lying on his sofa watching television, police said.

Moore told authorities she beat Wright with a steel bar because he assaulted her in an attempt to have sex with her.

Moore was committed to Lima State Hospital from 1966 to 1971 for the butcher-knife slaying of Joseph Woods, her live-in boy friend. In December 1956, police found the body of Moore’s husband of 18 years, Joseph Moore, at his home. He had been stabbed with an ice pick.