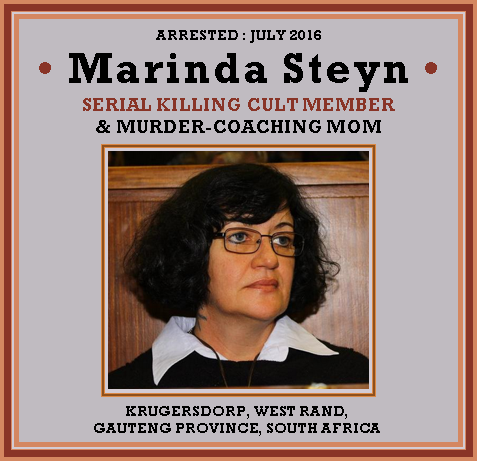 If there were a contest for “Mom From Hell,” Marinda Steyn would win the trophy, hands down.

Although Cecilia Steyn (no relation to Marinda Steyn) was the leader of the small Electus Per Deus cult, she never personally committed a murder. Just like Charles Manson, Cecilia Steyn  ordered her minions to murder the selected targets. It was Marinda Steyn, mother of Marcel Steyn and Le Roux Steyn,  who was mostly responsible for executing orders. The total number of murders – committed between 2012 to 2016 – was eleven, including one cult member, Mikeila Valentine – wife of cult member Zak –  who had expressed a desire to quit the group. It was the most savage of all the murders committed by the cult.

Marinda threatened her son Le Roux Steyn (then xx years old) during May 30, 2016 murder of Hanlé Lategan. Le Roux told his mother “I don’t want to kill the lady, ma.” His mother pointed a gun at him and told him she would shoot both Lategan and him if he didn’t “do his job.” He complied.

According to Le Roux, after the last murder Cecilia had been insisting he take out a life insurance policy in his name. Le Roux, who’d by that stage indicated he wanted to leave the group, later realised unlike Zak, his death probably wouldn’t have been faked.

Mother Miranda threatened daughter  Marcela when the teen announced her excitement about having been admitted to medical school. Marinda threatened her daughter, Marcel saying she would “get rid of her,” as had been done with cult apostate Mikeila Valentine, who had been stabbed “close to 60 times,” the woman’s “blood and intestines were splattered on the ceiling.” The prospect of Marcel attending medical school was seen as a betrayal of the cult.

Even after the cult members had been arrested, Miranda continued to threaten to murder Marcel. In August 2019, Marcel, now 21, had been transferred to another prison following threats from her mother, Marinda Steyn, 53, who is serving 11 life terms and 115 years in jail for her part in the murders. Marcel was the target of her biological mother's wrath after coming clean during her testimony in the high-profile murder trial. Marinda reportedly told Marcel that "witches" were going to kill her, according to Marcel's stepmother, Hannelie Scheepers. Since being moved to another Gauteng prison, Marcel reportedly no longer lives in fear of her mother and manages to sleep through the night. Earlier, Marinda reportedly told Scheepers that Marcel would be "taken out" when she returned to the Johannesburg South Prison. She reportedly told Scheepers that Marcel had "caused shit" and would have to pay for it. [Riaan Grobler, “Krugersdorp killings: 'Witches will kill you,' Marcel Steyn's mom tells her in prison – report,” news24, Aug. 27, 2019]

The motive was revenge on Ria Grunewald. In the months leading up to the murders home-made bombs were thrown at several of the OTC members’ cars. Le Roux apparently recognised one of the damaged cars as belonging to Natacha Burger (33). Natacha was an OTC member and close friend of Ria’s. She presented the course Know They Enemy.

The first murder victims were Natacha and her neighbour, Joy Boonzaier (63).

Le Roux testified how they’d gone to Natacha’s apartment complex in Centurion to scout where she lived and what her movements were. Le Roux said his mother and Zak murdered Natacha and Joy on 26 July 2012. Mikeila was also at the scene and fled the house in shock after the murders.

According to Le Roux the next victim was Pastor Reg Bendixen. Reg had been a friend of Ria’s and a guest speaker at the OTC from time to time. Le Roux testified Cecilia had given his mother, Marinda, and Zak police uniforms from her husband’s closet. The two showed up at Reg’s home in Northwold, Randburg, wearing wigs and police uniforms and armed with a knife and an axe.

Mikeila announced she was done with the group – she wanted out.

Le Roux explained there’d been a lot of planning involved in the next murder. They’d initially planned on murdering Ria’s son too but when one of Zak’s friends who was going to be an accomplice disappeared, the plan was shelved.

Le Roux said Cecilia feared the friend’s disappearance was an indication the police were investigating the 2012 murders and she’d ordered them to “lay low’. But money became an issue and that’s when they decided to target people whom they could rob.

John suggest they target his employers, Peter (51) and Joan Meyer (47). Zak, Marcel and Marinda went to the couple’s house but when they realised there’s no money in the safe, they stabbed their victims to death.

Le Roux says Cecilia wasn’t happy at all with the R700 cash, cellphone and wallet with useless bank cards they brought her.

Meanwhile, the plan was brewing to fake Zak’s death. A life insurance policy of more than R3,5 million was taken out in his name.

Le Roux testified in detail how they had to find a victim of more or less Zak’s age, build and height. The hapless victim was Jarod Jackson (41), a street vendor who’d regularly sold snacks near the Cosanna flats.

They had to tell Jarod a tall tale to get him to go with Zak. Zak and Jarod were in the front seats of Zak’s BMW, while Le Roux was seated on the passenger seat behind Jarod.

Marinda and John followed in Zak’s other car, a Mercedes SLK. Le Roux admitted to giving Jarod juice with sleeping tablets mixed into it – Cecilia had taken the tablets from her box of medicines. He alleges they’d ground the tablets together and mixed it into the juice.

Near Petrus Steyn in the Free State the sleeping tablets kicked in and Le Roux strangled him. They put Jarod in the Mercedes, poured paraffin over it and lit it. Then they all drove back to Krugersdorp.

In the following week Marinda and Cecilia’s brother-in law “identified Zak’s body” in the mortuary of the nearby town Bethlehem and a death certificate was issued. But Zak’s policy didn’t pay out, so everyone was still broke, Le Roux testified.

John suggested the next victim should be Glen McGregor (57), an accountant. Marcel, Le Roux and Marinda visited Glen’s smallholding pretending to ask for help with Marinda’s taxes. But Marinda shot him and transferred R6 000 from his account to hers before Le Roux finished the job by strangling Glen.

Le Roux and Marcel half carried, half dragged Glen, who was a large man, to the bathroom, put his body in the bath and opened the taps.

Anthony Scholefield, 67, a tax consultant, was the group's next victim. The foursome – Marinda Steyn, Marcel Steyn, Le Roux Steyn and John Barnard – lured Scholefield to their flat in Krugersdorp and forced him at gunpoint to hand over his bank cards and PINs. They withdrew R16 600 from his accounts and used his cards at various shops in Krugersdorp.

Scholefield was eventually strangled and placed in the boot of his car, which was then abandoned.

Anthony Scholefield, Kevin McAlpine and Hanlé Lategan respectively are lured to the Cosanna flats, where they’re forced to hand over their bank PIN numbers. Le Roux testified how each time his sister made a successful withdrawal, Marinda would tell them to finish what they’d started. But he looked straight at Cecilia when he talked about how he’d used Anthony’s money to buy her a black and red jacket. He pointed at her when he said, “She’s worn that jacket in this very court.”

The arsenal of weapons they’d found in Marinda’s flat after Le Roux’s arrest was on display in court as evidence. It includes a .38 special revolver used to subdue and threaten the victims, as well as the 9mm pistol used to shoot Glen.

Marinda Steyn in her own words:

“Kill her or I’ll shoot you!” said by Marinda Steyn to her son, Le Roux. [Jana Marx, The Krugersdorp Cult Killings, 2021, LAPA pub.] 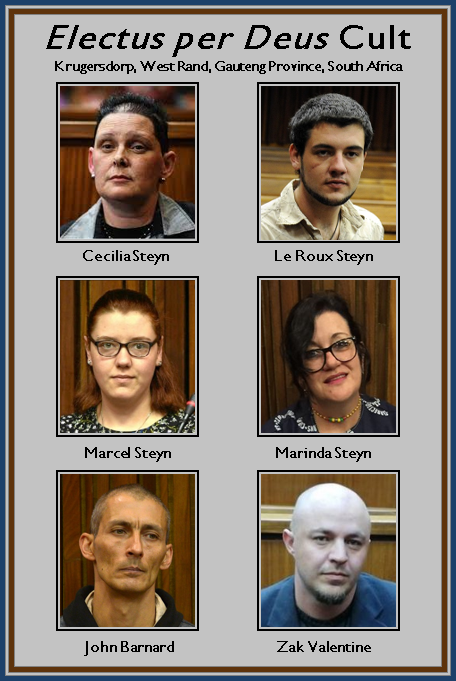 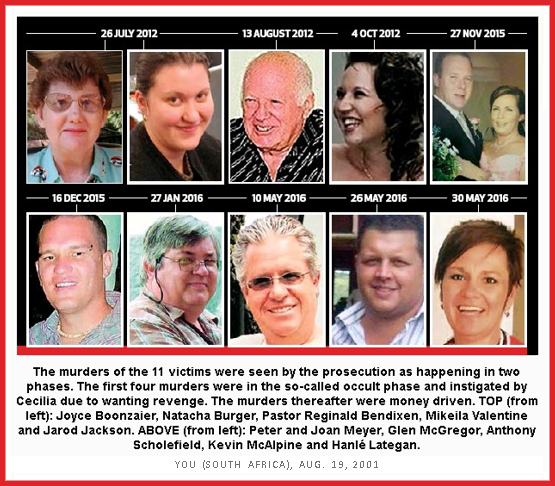 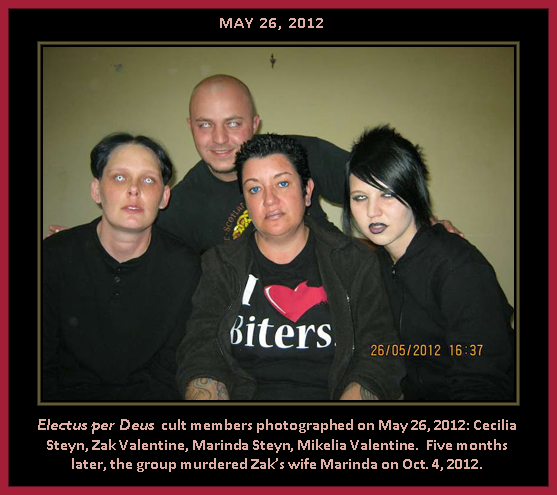 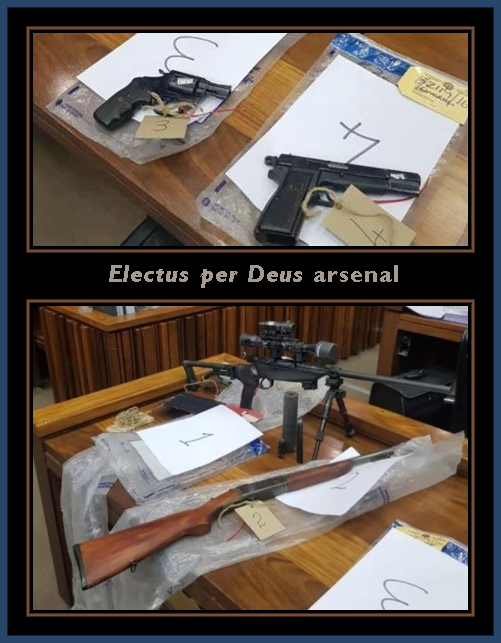 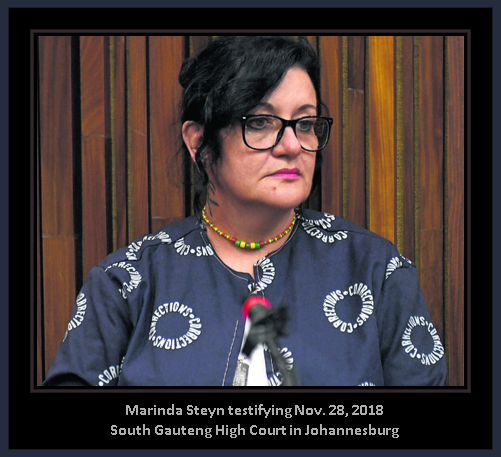 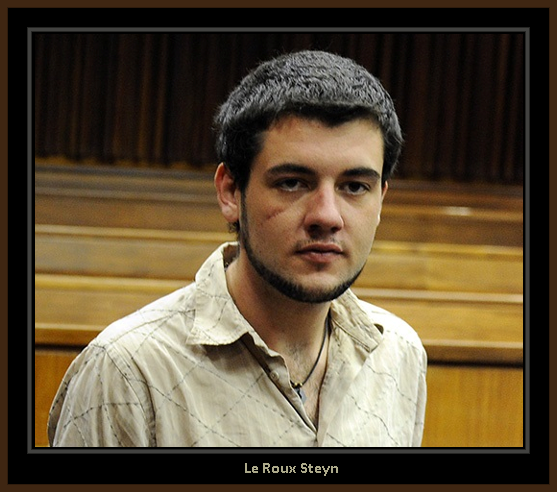 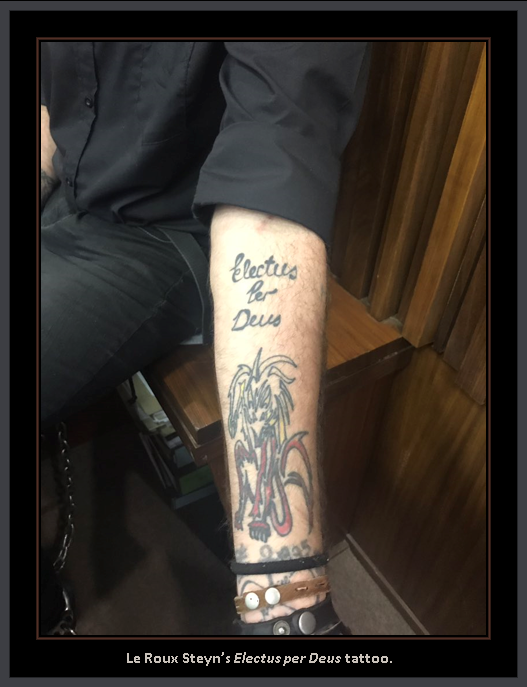 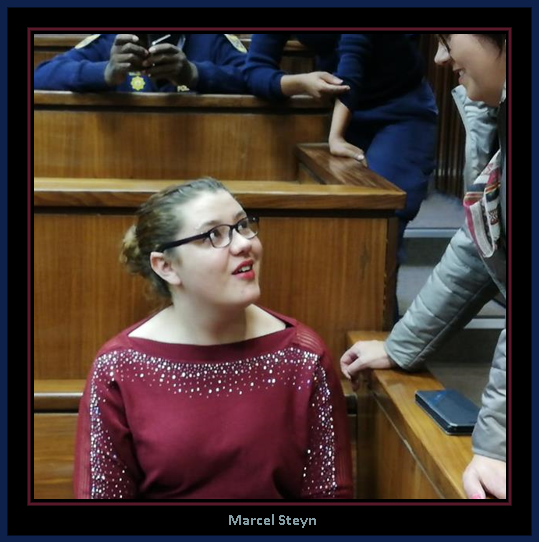 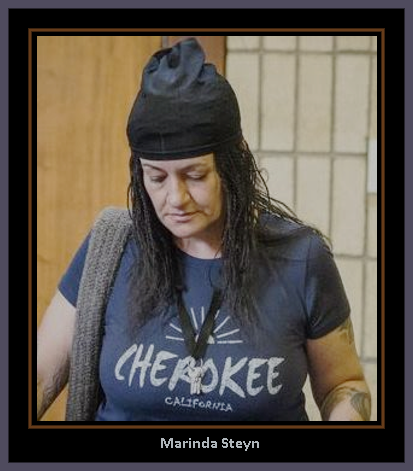 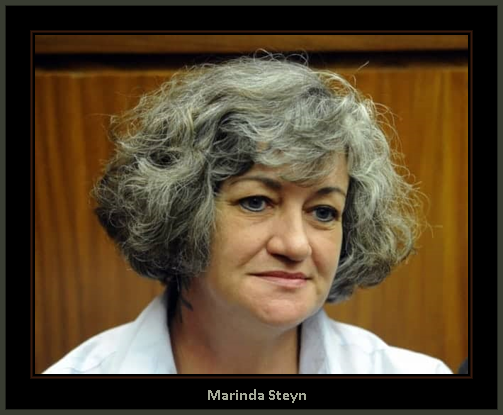 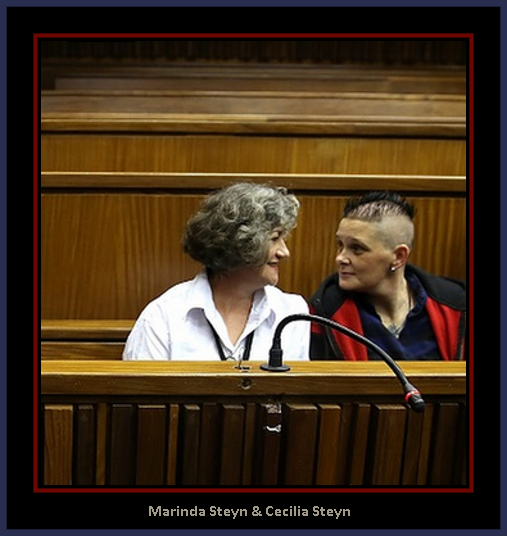 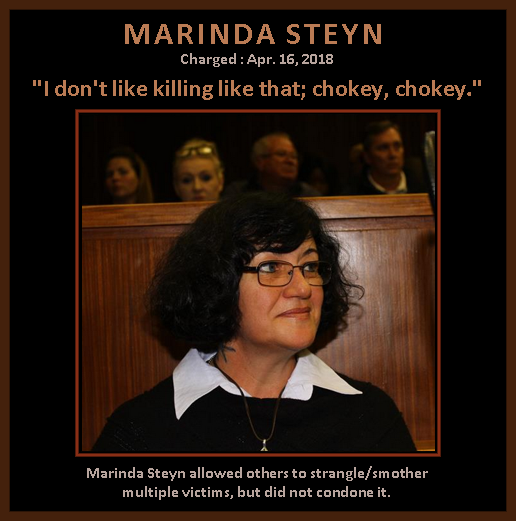 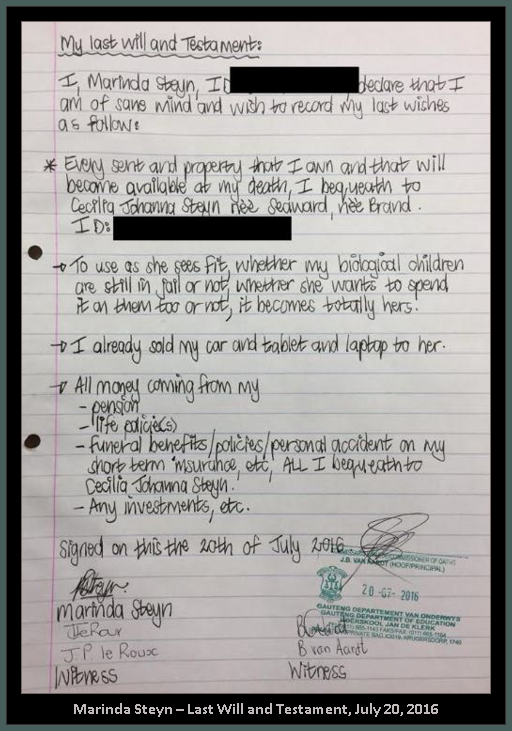 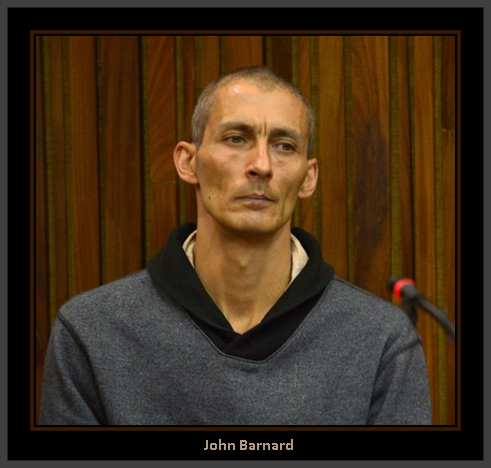 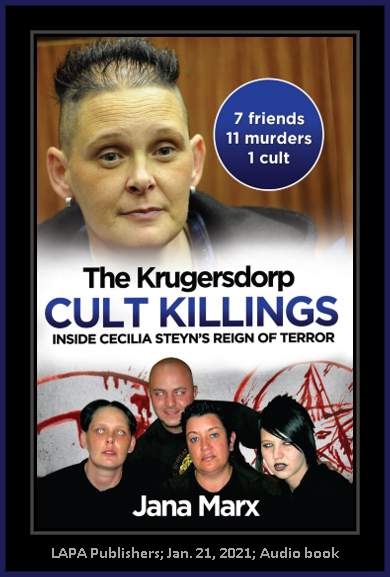 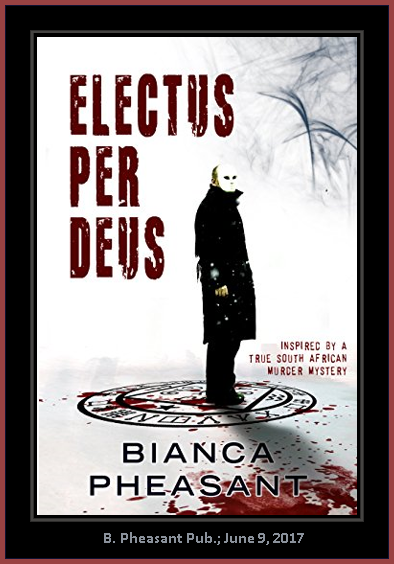 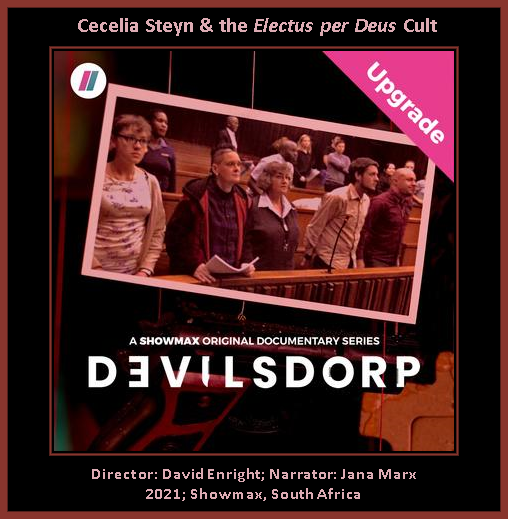