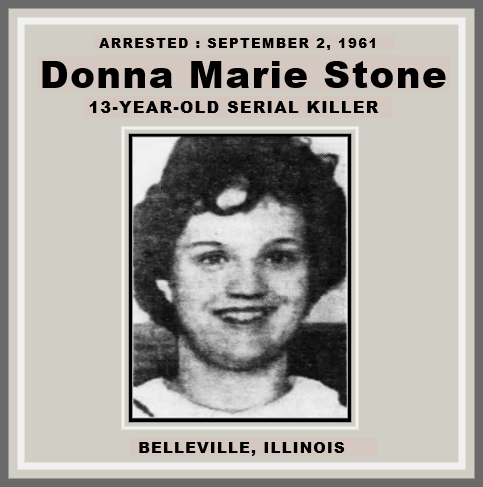 FULL TEXT: The body of Kidnap victim Margaret Wernicker was found Saturday after a Chicago ex-convict and his 13-year-old girl friend were captured in West Texas and confessed to four cold-blooded murders since Wednesday.

Three of the victims, shot in the head after their hands were bound, were from the Belleville area.

The captives, John Edwin Myers, 32, and Donna Marie Stone, signed statements that they each fired two shots into the heads of two of the victims.

They were their hostage, Muss Wernicker, and a hitchhiker who was their last victim before their lurid flight in a stolen auto was ended by an observant Texas Highway patrolman.

From directions father of five and his runaway consort, a search party in Oregon County, Missouri, was able to find the body of Miss Wernicker.

The Missouri Highway Patrol said the body was in a field off a gravel road about seven miles north of Thayer.

A preliminary examination indicated four or five shots had been fired into her head. The body was under brush about 150 feet from the road.

The statement said Meyers and the girl took Miss Wernicker into the field and tied her hands.

Donna Marie shot her twice and then Meyers “finished her off” with two more bullets, according to their statement.

When arrested, Donna Marie was wearing some of Miss Wernicker’s clothing.

Their last murder was about 10:30 p. m. Friday between Big Spring, Tex., and Midland, where they were halted shortly after midnight by Patrolman Jack Reaves, who recognized the auto from a description broadcast in the Belleville murders and kidnapping.

A hitchhiker, Lee DeKraai, about 30, of Ottumwa, Ia., was hapless enough to be picked up by the pair in the Fort Worth area.

As he dozed in the front seat between them, the confession said, Myers fired a shot into his hand.

The girl was quoted as saying:

“WE both thought he had some money, but he didn’t have a penny.”

The Howard County, Texas, district attorney, Gil Jones, told The Globe-Democrat that he had filed a murder warrant against Meyers but not the girl, “because of her age.”

Mr. Jones said that Donna Marie would be held as a juvenile and his office would file a formal request for her return from wherever she may be taken after she reaches the age of 18. The district attorney said this will be done with the intent of also charging her with murder.

He said he would insist that Texas retain custody of Meyers until he can be tried for murder.

Mr. Karns then departed for Big Spring, Tex., with chief sheriff’s deputy Maurice Joseph and deputy Robert Mitchell in an effort to obtain jurisdiction over the prisoners.

A federal kidnap charge also is pending against Meyers and Donna Marie in the Wernicker case. Warrants were issued Friday after the fugitives were identified by fingerprints and photographs.

The Texas ending of the lurid case brought to light the motive for the slaying of the Ballards Wednesday night by a small fishing pond west of Belleville.

According to their statement, Meyers and the girl, who had run away from her grandparents’ home in Edwardsville Aug. 22, had been camping by the pond and wanted money and a car to go to Arizona.

There, the girl said, they intended to get jobs picking cotton.

Mr. Ballard, of 1121 Bethesda st., St. Clair County, and his daughter Carol were fishing there when Meyers and Donna Marie selected them as robbery targets.

Ironically, after binding the victims and shhoting them, they obtained only $1.

Then they walked to the nearby home of Mr. and Mrs. H. P. Graham, 1801 South Seventy-fourth st., and took Mr. Graham’s car at gunpoint.

They also forced Miss Wernicker, who had lived wiuth the couple 22 years, to accompany them.

Miss Weinecker, an employe in the addressograph department of Stix, Baer and Fuller, made a telephone call to Mr. Graham shortly after 9 p. m. from a public booth at 823 Market st.

She said the man (Meyers) told her he he was going to drive about 50 miles to see his father and then surrender.

But the abductors headed south, stopping  to kill Miss Mernicker aftertaking $16 from her.

In Chicago, the girl’s father, James Stone, 35, and her mother, Norma, 36, parents of seven children, heard the news of their daughter’s capture and confession with horror.

Donna Marie, who looks years older than she is, was considered too young to go on dates.

Meyers, a friend of Mr. Stone and a resident of the same apartment building, apparently followed when the Stones took Donna Marie to Edwardsville recently and left her with her grandparents.

According to the FBI Meyers had been imprisoned three times previously.

His record shows while in military service in 1948 he was charged with being absent without leave and striking a senior officer and sentenced to three years six months in the United States disciplinary barracks at Portsmouth, N. H.

He was sentenced for child abandonment in 1954 in St. Cloud, Minn. Meyers said he served two years.

The killers were described as calm and relieved at the conclusion of their long and bloody flight. 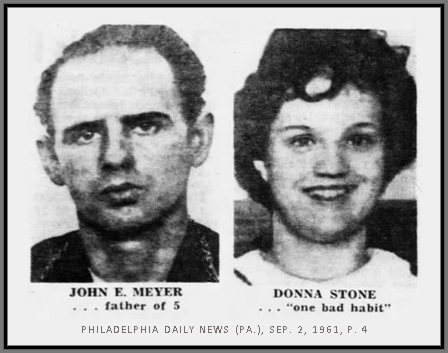 BELLEVILLE, Ill. — Donna Marie Stone, 14, who accompanied her married lover on a cross-country crime spree, today '¡pleaded guilty to voluntary manslaughter in the slaying of a man I and his daughter and was turned I over to youth authorities.

Miss Stone had been charged with murder in the Aug. 30, 1961, shootings. She changed her plea just as her trial got under way and Judge Richard T. Carter placed her in the custody of the Illinois Youth Commission for confinement at Geneva “until discharged.”

Under Illinois law minors can be held by the youth commission without a definite length of sentence.

The prosecution had summed 31 witnesses for Miss Stone’s trial for the murders of George Ballard, 41, Villa Hills, Ill., and his daughter, Carol, 10.

Two of them were heard before she changed her plea. A. Gordon Dodds, superintendent of schools at Edwardsville, testified the girl had an I.Q. of 107, “slightly above average.”

The other witness, the Rev. Eugene Lamport, pastor of the First Christian Church of Edwardsville, testified Miss Stone had had a good moral reputation.

Miss Stone had accompanied John Edwin Meyer, 33, whom she I met after her family moved to Chicago, on the weekend crime tour. Meyer was convicted in Big Spring, Tex., of the murder of a hitchhiker and is under the death sentence.

Ballard and his daughter had been bound with plastic clothesline and each was shot in the head. Miss Stone had been vacationing with her grandparents in Edwardsville when Meyer, an ex­-convict, picked her up a few days before the slayings.

Asst. State’s Atty. Charles Hamilton said Meyer and Miss Stone had signed confessions to the effect that Meyer shot and killed Ballard and his daughter. He said that in the statement, Miss Stone admitted tying the hands of the victims. 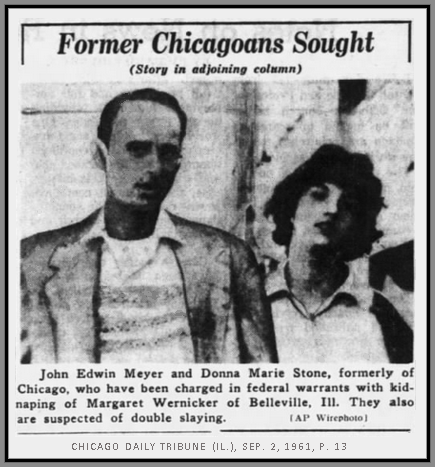 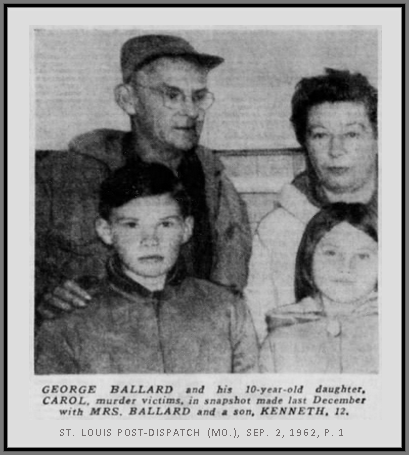 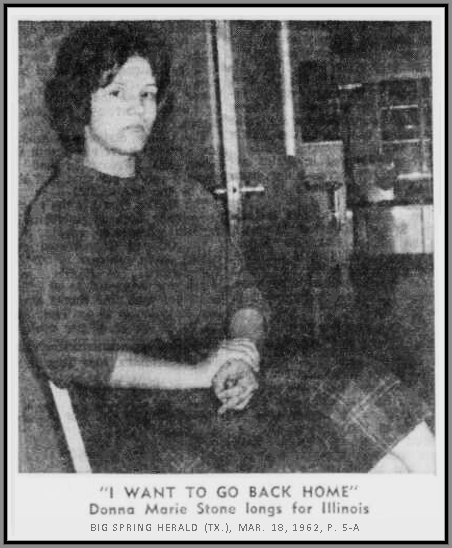 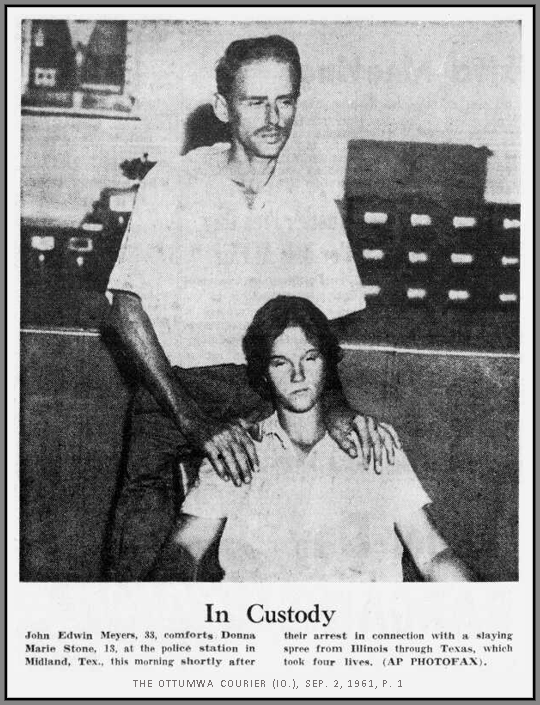 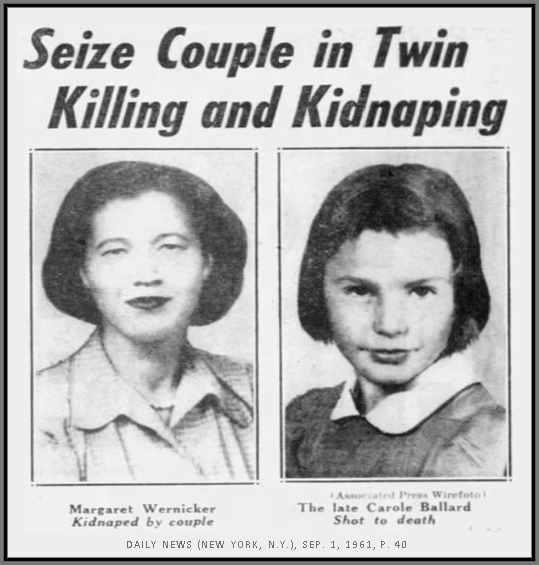 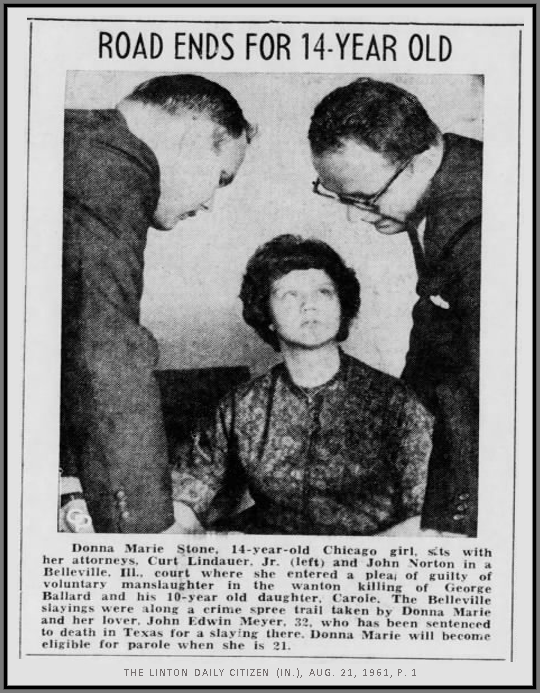 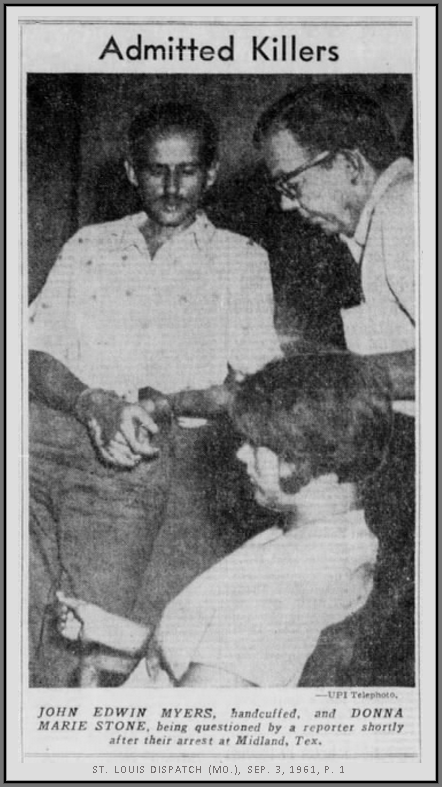 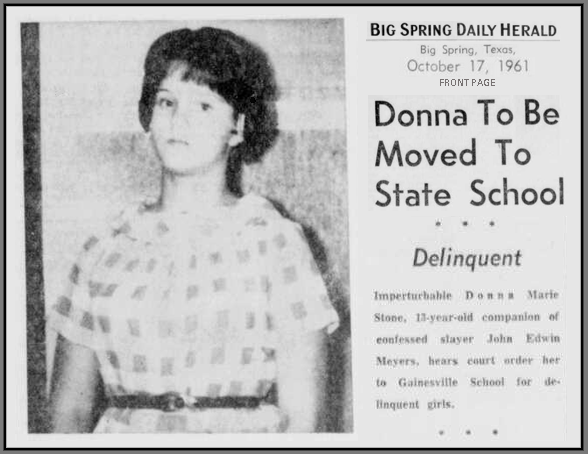 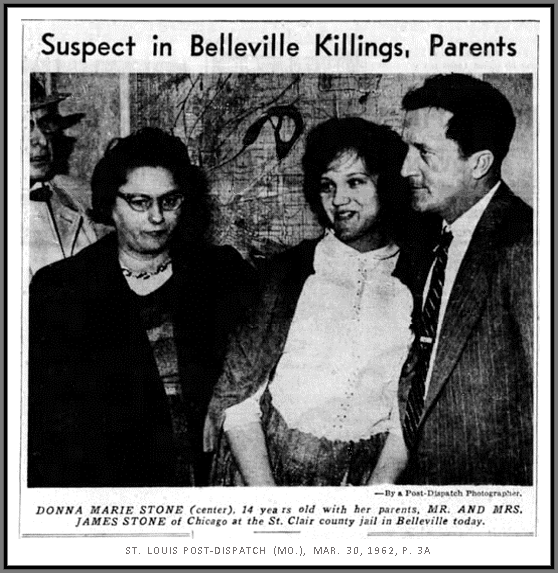 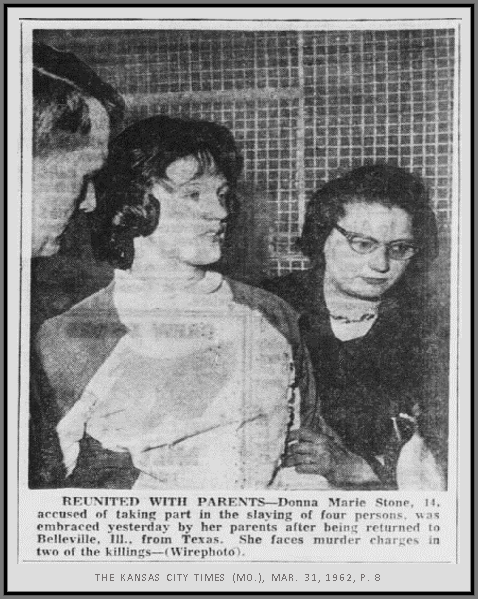 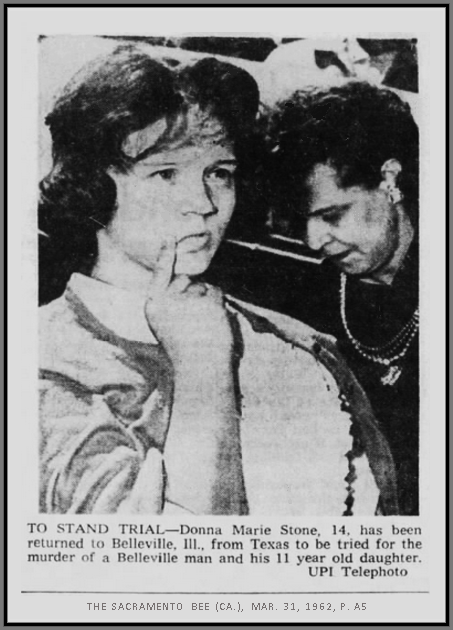 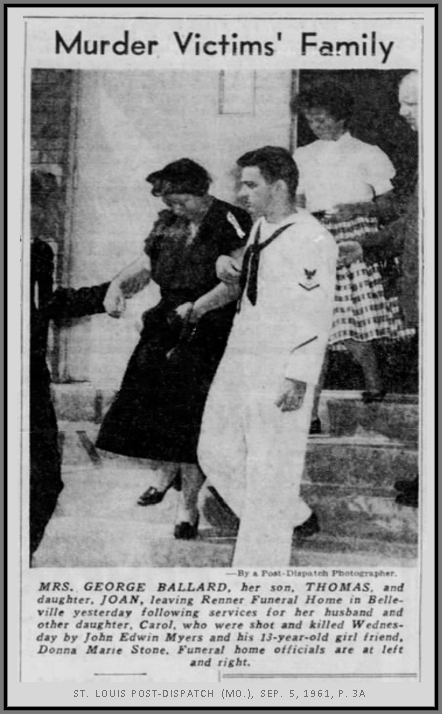