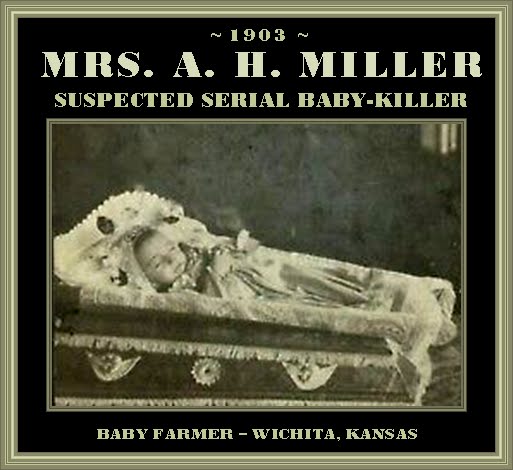 FULL TEXT: Wichita, Kan. – Mrs. A. H. Miller, who was arrested this afternoon charged with the murder of a 3-months-old child, named Charlie will be given a preliminary hearing next Tuesday. She declared in court this afternoon that her trial would stir up some of the good people of Wichita when she told all she knew. She said the little baby which was found buried in her back yard had died from natural causes.

County Attorney Eckstein, Coroner McCollister and police officers made a thorough search of the premises this afternoon and just before dark were rewarded by uncovering the body of a second infant, which is said to have been buried some time in June. It had been buried in quick lime, as had the first. Search will be made tomorrow for others which are said to have been buried there within the past three months. For several years Mrs. Miller is thought to have conducted a baby farm, but this is the first time that the officers have been able to get a case against her. The baby which was first found is said to have been taken to her by a Wichita physician, who is said to have given her $25 to find it a home. It was all right when seen early in the evening, but the next morning it seemed to have disappeared.

FULL TEXT: Coroner McCollister enpanelled [sic] a jury to investigate the death of the two infants whose bodies were found buried in the back yard of the Miller baby farm on Wynona avenue, this morning, and evidence is being taken in the coroner's room in the court house, now. The jury was impanelled [sic] this morning, and went imediately [sic] to the Bleitz undertaking rooms where the remains if the two babies were viewed, after which the coroner ordered the county undertaker to bury them at the expense of the county. Both were placed in one coffin, and buried in the potter's field.

From the undertaking room, the jury proceeded to the Miller home, where it was shown the premises and the two holes from which the little bodies were taken by the officers sent out to find them.

The second baby was found just after dark last evening. For several hours the coroner and men sent cut to do the work bad carried on the search, but it was not until the county attorney arrived with a plot of the ground drawn by some one who evidently knew what he was doing, upon which was shown the probable location of another grave, with reference to the one first opened on Wednesday. Probes were used to find where the ground was loose, and the grave soon was located within a few inches of where the plot showed it to be. The body taken from it was that of a child considerably smaller than the first one found, and. like the first, it had been buried in quick lime. The skull was blackened and fell apart when the grave was opened, but the rest of the body was badly decomposed and could scarcely be recognized as that of a child, except for one foot, which remained intact. It was placed in a box provided for that purpose, and search was made for another, which was supposed to be within 10 feet of that one, but the efforts to locate it were fruitless, and the party left the place about dark.

The guard which had been kept on the premises since the finding of the first baby, Wednesday, was relieved last night.

The house where the alleged crime was committed and where the bodies of the infants were found, is located on Wynona avenue, about a hundred feet north of Second street. It is a cottage facing to the west, and big cottonwood trees surround it, making it very homelike and pleasant in its appearance at first glance. Considerable filling in has been done in the yard, and additions have been built to it since the Millers purchased it, showing an attempt to fix it up and make it inviting. The lots on which it is situated are 100 feet wide by 140 feet long, and not a blade of grass is to be seen within the fence which surrounds them. At the rear of the house, which sits in the center of the lot, is a chicken house, located at the rear of the lot. It is between this chicken house and the dwelling house that the burying ground was located. A corner of the lot. some 40 feet square, was fenced off with poultry netting, and it is just inside this enclosure, within a few inches of the fence, and perhaps 15 or no feet east of the chicken house, that the first grave was discovered.

The little body was about two feet beneath the surface, and the ground there is so hard that some doubt was expressed by the authorities that a woman could have dug the grave. The second body was found, in accordance with directions given by the mysterious informant, whose name the authorities still refuse to divulge, on the other side of the fence and nearer the house, being within 10 or 30 feet of the back door. It, too, was dose to the fence, and was not buried as deeply as was the first one found. It is supposed to have died in June.

While the officers were making their investigations, the husband of the prisoner stood in another part of the yard talking to a member of the party, but offering neither objections nor suggestions.

Mrs. Miller’s hearing was set for Tuesday morning at 8 o’clock. She retained Judge Thomas B. Wall to defend her, and volunteered the opinion expressed to the officers before, that she would make her trial interesting for some people in Wichita before it was ended. The authorities are disposed to take her threats lightly, however, as it is known that she will not be allowed to overstep the rules of procedure in court, to tell what she may know about some one with whom she has had dealings of a questionable nature.

After the date was set. she asked leave to return home, that she might look after the newly born baby of ore of her boarders, which arrived on the scene about 8 o'clock yesterday morning, which leave was granted, and Mi-was taken back by Deputy Marshal Hawk. After she had attended to her duties, she loaded a big bundle of clothes, a feather pillow, blankets, etc., into the buggy and, with a baby which looked to be about two or three months old, which she said had come from the same place as the one called Charlie, for whose murder she now is under arrest, she was taken back to the county jail, to await her preliminary hearing. She joked with the men who were there and seemed in a much better humor than on the day previous, when she called the detectives who were digging in her back yard about everything that is pronounceable by a woman of her character. She still contends that the baby died a natural death, and that the only wrong she did was in burying it without the necessary permit and death certificate.

Just before she arrived at the house, she is said to have asked the marshal who had her in charge what so many men were doing about her house. She was told that thy were there to see If they could find any more dead babies, to which she replied, laughingly, that they "could find a bushel basket full of them if they knew where to look."

The jury which is investigating the case of the little ones, today, in an attempt to fix a probable cause of death, is composed of the following men:

W. P. Parr. J. C. Kirk. J. P. Little, D. V. Donnelly, George C. Wells and W. H. Nield. There will be some five of six witnesses only, but the county attorney has little hope of finishing the inquest this afternoon. The matter will be taken up at 2 o'clock.

FULL TEXT: The A. H. Miller case is another that will probably not be tried this term, owing to the absence of the prosecuting witness. Mrs. Miller is charged with the murder of a baby boy who was left in a baby farm east of town. The child’s body was found buried in the yard at Mrs. Miller’s residence. 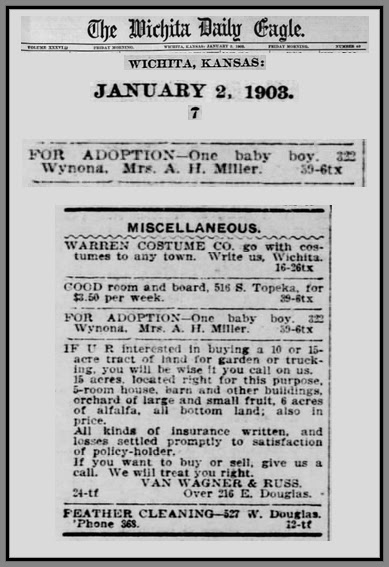 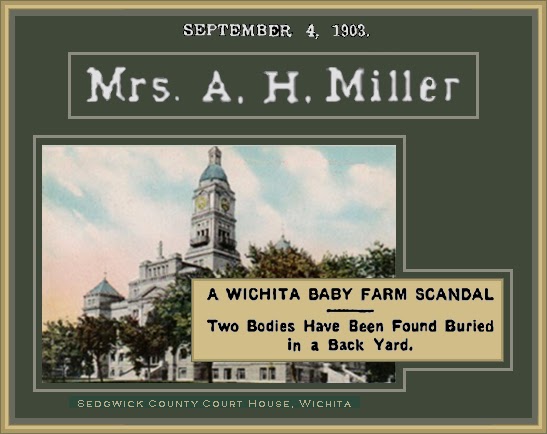