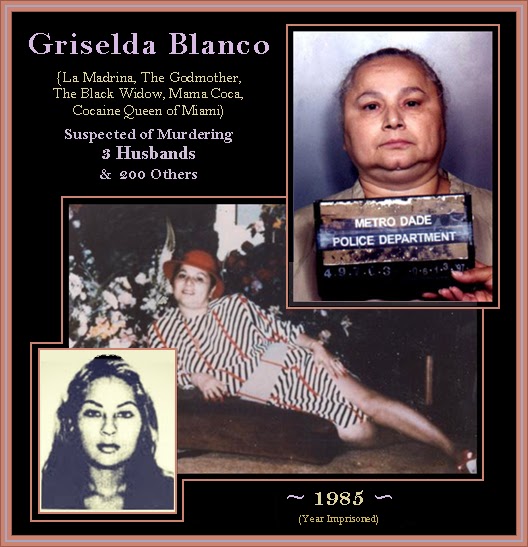 Griselda Blanco was gunned down in Medellin, Colombia on September 3, 2012. She is thought to have ordered approximately murders.

From CrimeWatch RT: Otherwise known as la Madrina, the Godmother, the Black Widow, Mama Coca and the Cocaine Queen of Miami, Griselda Blanco has been heralded ‘The most bloodthritsy female criminal of our time’. Born in 1943, Blanco committed her first murder aged 11, was a prostitute from the age of 12, and went on to become a drug lord specializing in cocaine. Known for her sociopathic tendencies and her extravangant collections of fine art and jewels, Mama Coca was a major figure in the ‘Cocaine Cowboy Wars’ of Miami in the late 1970’s. She is thought to have masterminded over 200 murders in Miami during this time. Openly bisexual, Blanco reportedly murdered all 3 of her husbands, and 3 of her 4 sons were also murdered, though not by her. After her arrest in 1985 Mama Coca was imprisoned for nearly 20 years until 2004. Her whereabouts are now unknown, though she was last spotted at Bogota airport in May 2007. [CrimeWatch RT]

Wikipedia: Griselda Blanco (born February 15, 1943) is a former drug lord for the Medellín Cartel, and was a pioneer in the Miami-based cocaine drug trade and underworld during the 1970s and early 1980s.

From Wikipedia: Blanco was born on 15 February 1943 on the north coast of Colombia, and moved to Medellín when she was three years old. In the film Cocaine Cowboys II: Hustlin’ with the Godmother, Blanco’s former lover, Charles Cosby, recounts how Griselda, at age 11, allegedly kidnapped, tried to ransom, and eventually shot a child from the upscale flatland neighborhood near her hillside slum neighborhood. By her preteens, she had become a pickpocket, and at the age of 14 she ran away from her physically abusive mother and resorted to prostitution for a few years in Medellín, until age 20. She married her first husband, Carlos Trujillo at that time, and bore him three sons: Dixon, Uber, and Osvaldo.

In the mid-1970s, Blanco and her second husband, Alberto Bravo, immigrated to the United States, settling in Queens, New York. They established a sizable cocaine business there, and in April 1975, Blanco was indicted on federal drug conspiracy charges along with 30 of her subordinates, at that time the biggest cocaine case in history. She fled to Colombia before she could be arrested, but in the late 1970s she returned to Miami.

Blanco was involved in much of the drug-related violence known as the Cocaine Cowboy Wars that plagued Miami in the late 1970s and early 1980s, when cocaine supplanted marijuana. Her distribution network, which spanned the United States, brought in US$ 8 million per month. Blanco’s violent business style brought government scrutiny to South Florida, leading to the demise of her organization and the free-wheeling, high profile Miami drug scene of those times. She is suspected of having masterminded over 200 murders during this time in Dade County.

In 1984, Blanco’s willingness to use violence against her Miami competitors, or anyone who displeased her, led her rivals to make repeated attempts to kill her. She moved to California to escape the assassination attempts. On 20 February 1985, she was arrested by DEA agents in her home. Held without bail, Blanco was sentenced to more than a decade in jail. She continued to run her cocaine business while in jail. By pressuring one of her lieutenants, the Miami-Dade State Attorney’s Office obtained sufficient evidence to indict her for three murders. However, the case collapsed, largely due to technicalities and Blanco was released from prison and deported to Colombia in 2004. Her whereabouts are unknown, but she was last seen in Bogota Airport in 2007 where a photo was taken of her.

Blanco bore her youngest son, Michael Corleone, with Dario Sepulveda. Dario left Blanco in 1983 and returned to Colombia, kidnapping Michael when he and Griselda disagreed about who would take custody. Blanco paid to have Dario assassinated in Colombia, and had her son returned to her in Miami. According to a report in Miami New Times, “Michael’s father and older siblings were all killed before he reached adulthood. His mom was in prison for most of his childhood and teenage years, and he was raised by his maternal grandmother and legal guardians.” 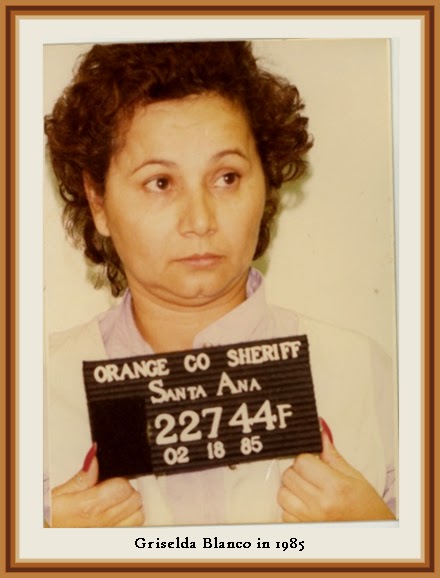