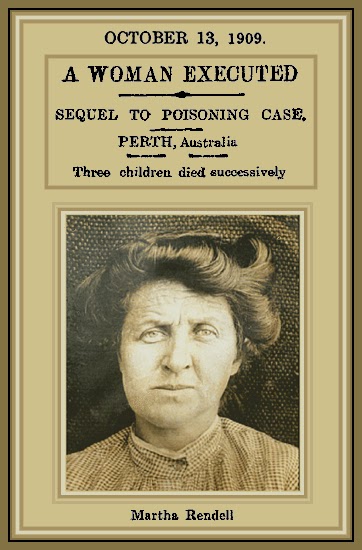 Wikipedia: Rendell brutally abused Morris' children, once beating Annie so brutally that she could not walk. Arresting officer Inspector Harry Mann said "she delighted in seeing her victims writhe in agony, and from it derived sexual satisfaction."

FULL TEXT: Fremantle, October 6. – Four petitions to the Executive and a strong appeal to the Assembly for a commutation of her sentence having failed, Martha Rendell was executed to-day for poisoning the Morris children. Death was instantaneous.
PERTH, October 7. – The woman Rendell died protesting her innocence.

The trial of Martha Rendell and Thomas Nicholls Morris, who were accused of having poisoned with spirits of salt Arthur Morris, the male prisoner’s son, was concluded at Perth on September 14.

Morris and Rendell had been living together two or three years, Morris being separated from his wife, whose children remained with the father, Rendell calling herself their mother. Three children died successively from a disease which the medical men could not identify, though they gave death certificates. One symptom was a peculiar membrane appearing in parts of the throat. Nearly a year after the death of Arthur Morris, his brother George ran away from his father to his mother, and when found by the police said, “I would not stay to be poisoned like the rest.” The bodies of the three children were exhumed, but no sign of spirits of salt could be detected, though appearances were compatible with death from an irritant. Spirits of salt were frequently purchased by Rendell. The boy George swore that he saw Rendell pour spirits of salt, and take it into Arthur’s room. He heard the latter screaming soon after, but no direct evidence was given that the spirit had been applied to his throat.

Mr. Justice MacMillan (acting Chief Justice) said it would not be denied that there was a strong suspicion, but the jury should be morally certain, and not strongly suspicious. It was the first case in which spirits of salt had been alleged to be used for murder. He never had had a case which had caused him so much difficulty.

The jury, after four hours’ retirement, found Mrs. Rendell guilty of murder, and Morris not guilty.

The death sentence was passed on Rendell, and Morris was discharged.

At the coroner’s inquest previously the jury held that Rendell was guilty of murder, and Morris an accomplice. 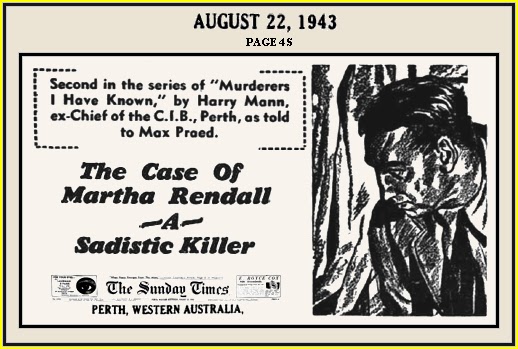 Note: The following article gives the spelling as "Rendall."

FULL TEXT (Article 2 of 2): As the child in bed writhed in agony, the woman sat in the rocking chair and rocked, to and fro. Occasionally her body stiffened when an agonising cry for help burst from that little tortured throat. No, this was not a mother suffering desperately in sympathy with her pain-wracked child. It was a woman, a sadistic murderess, experiencing the strange, inhuman pleasure that suffering brings to those whose distorted minds demand the satisfaction of inflicting pain on others.

Strange and horrifying though it may appear, this twist ot mind, this denial of the altruistic urge, is not uncommon. Rather is it expression of a tendency that lies deep down in the minds of us all.

Who has not wondered at the spectacle of a child tormenting an insect, bird or animal with the unthinking brutality of the very young?

Who has not asked what it is that causes the bully to delight in his fists, the flagellator in his whip?

These are expressions of the sadistic urge in man.

But in Martha Rendall this tendency, which is the basis of all normal aggressiveness, had become distorted, through some strange process of the mind, into a mania.

She was capable of passion, this childless woman, but her twisted, perverted mind had not, and could not, ever have known what it is to love.

Martha Rendall was a mystery woman.

In April, 1909, something happened which caused investigations to begin.

Nothing was known of her parents, her childhood, or of her early life, although she was said to have been born in South Australia. Her police history, as I learned it, began when Thomas Morris left his wife in Subiaco and set up house with Martha Rendall.

The illness of each child extended over a lengthy period, and was watched by many of the leading members of the medical profession. Only one doctor suspected foul play.  He, like the others, could not find a cause for the condition of the three children during their illness, but eventually he thought it resembled metallic poisoning in some form, but this was not till after the death of the third child, Arthur.

Influenced by other members of his profession, this doctor did not report his suspicions to the authorities, and the matter was allowed to remain.

In April, 1909, however, something happened which caused investigations to begin in this, probably one of the most fantastic in the history of the world’s crimes.

For it was then that Thomas Morris officially reported that his son George had disappeared from his home. The matter was treated as an ordinary one of a lad running away from home till, on April 17, I received information that three of the Morris children had died previously under circumstances which were considered by the neighbors to be suspicious. Some of them feared that George Morris might have met his death in the same mysterious way.

At this stage the complete investigation was entrusted to Plain-clothes Constable Lamond and myself.

We soon located the lad, living with his mother in Subiaco.

He told us that he had run away from home because the woman Martha Rendall had attempted to poison him, and, further, that she had poisoned his two sisters. Olive and Annie, and his brother Arthur with spirits of salts some two years before.

It was then that our investigations began in earnest.

We approached the doctors, none of whom could express an opinion, having no previous similar case to guide them.

We obtained evidence that large quantities of spirits of salts had been purchased during the children’s illnesses, that the purchase ceased after the death of the last child.

We had the bodies disinterred and examined, which confirmed that something had caused inflammation of the bowels and rectum.

After interviewing scores of persons, we found a woman who had lived next door to the Morris family during Arthur Morris’ illness.

She recalled Martha Rendall’s constant swabbing of the lad’s throat. She remembered his agonising cries at such times and his repeated calls for help.

It was then experimentally confirmed that spirits of salts applied to the throat had brought about the condition ultimately ending in the death of Annie, Olive and Arthur Morris.

While we were engaged in this inquiry Martha Rendall suddenly exhibited a similar condition in her own throat, brought about in the same manner!

No substantial motive for the crime was discovered except that as the children grew up they began to resent the woman’s authority over them. They said she had no right to punish them, not being their mother.

Annie Morris’ fatal illness commenced immediately after the child told Rendall she would not obey her. Following this Olive and Arthur sickened and died in turn.

Beyond an infatuation for Thomas Morris, a relationship which she no doubt felt was threatened by the attitude of his children, Martha Rendall was apparently devoid of all feeling, and never at any time, either previous to or during the seven days’ trial in the Supreme Court, did she show the least concern for her position. So noticeable was this that the judge, in sentencing her to death she was the only woman who has ever been hanged in W-A said that if the Crown witnesses had spoken the truth the woman, was a “human monster.”

So here again we can see the strange working of a diseased mind in this case of a woman who deliberately tortured children and callously watched them die.

What explanation can there be of such inhumanity?

But my theory is that the first application of spirits of salts to the child’s throat was a mistake an accident. One of the doctors told us that he had prescribed a throat paint in the early stages of the first child’s illness. We also found out that there was a bottle of hydrochloric acid in the house at the time.

As I see it, when the first accidental application of the acid was followed by the child’s writhing and cries of pain it awakened to Martha Rendall a strange and perverted sense of pleasure. A mental illness that had lain dormant perhaps all her life, suddenly broke through the pattern of normal living in this woman’s mind, and she was helpless in its grip. So to her the spectacle of pain in those children was one that aroused an insidious yet powerful passion.

Professor Poole, in describing such a case, says that there may be many people In whose minds a sadistic urge lies dormant. A sudden accident may cause tnts tendency to flood out an normal feelings in such a person’s mind, and impel him or her to seek a perverted sense of pleasure in destruction.

Remember that Martha Rendall afterwards commenced to torture herself as she had tortured those little children!

Remember, too, mat she went calmly – perhaps gladly – to her own death, which justice demanded of her in retribution. 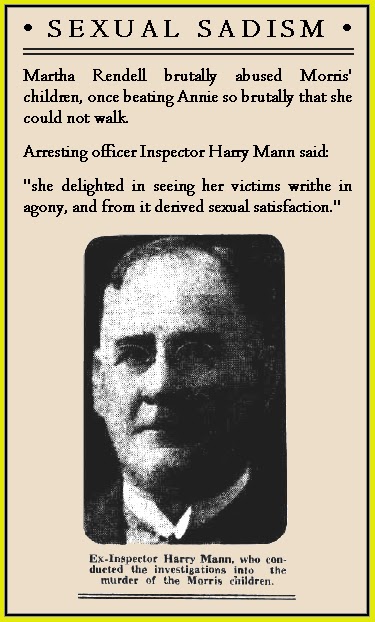 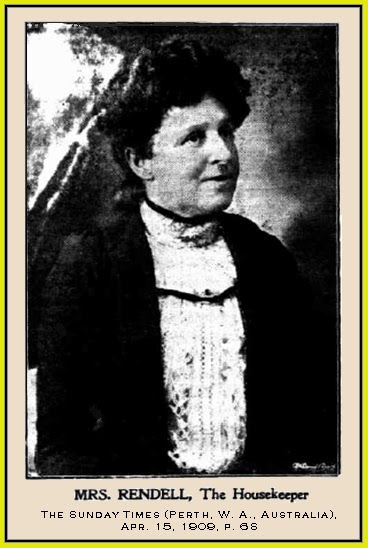 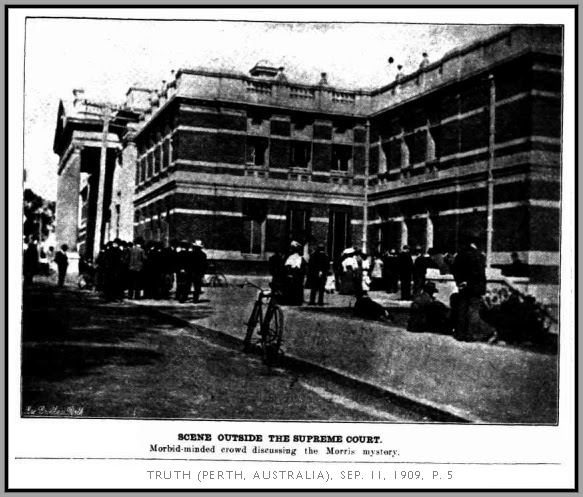 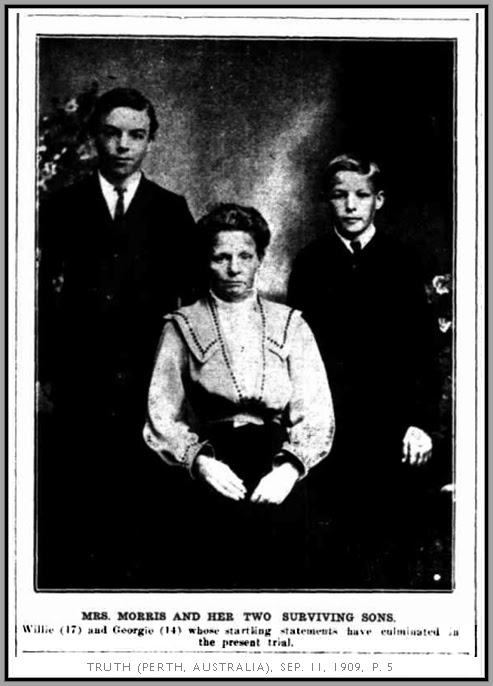