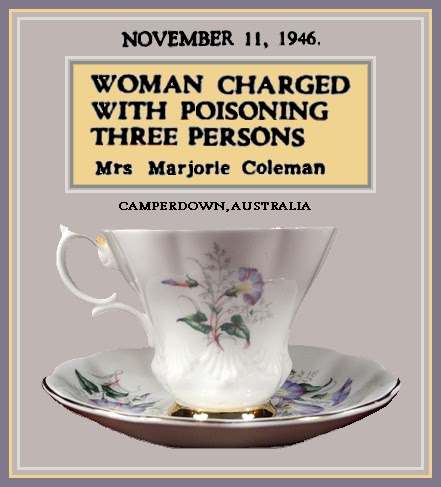 FULL TEXT (Article 1 of 6): Sydney, Sat. — The exhumation of the body of a man who died four years ago was followed today by the appearance of a woman in the Central Police Court. The exhumation took place at night in the northern suburbs cemetery where the man was buried in 1942.

It was carried out in the strictest secrecy under the supervision of detectives. The woman charged is Marjorie Coleman (42). Her occupation was given as domestic duties.

The charges against her are:

1. That between October 14, 1942, and October 31, 1942; she did feloniously administer poison to Robert Walter Reynolds with intent to murder.

2. That between January 30, 1946, and August 30, 1946, she did feloniously administer poison to William Patrick O’Dea with intent to murder.

Magistrate Oram remanded her to November 15 and refused bail. Prosecutor-Sergeant Forde said that a coroner’s inquiry would be held in relation to Reynolds.

Marjorie Coleman, who tapped the rail of the dock with her fingers throughout the proceedings, was escorted from the court by a police woman.

An examination of the exhumed body was made by Government medical officer Dr. Percy, who directed some parts to be sent to the Government analyst.

Inquiries revealed that the man died after a short illness. A certificate stated that the cause of death was gastro enteritis and pneumonia.

FULL TEXT (Article 2 of 6): Sydney, Sunday. – A Camperdown boarding-house proprietress, Mrs. Marjorie Coleman, 42, was charged on Saturday with having administered poison to two men and a woman with intent to murder them.

The charges followed the secret exhumation of the body of Robert Walker Reynolds, 48, at the Northern Suburbs Cemetery, almost two years after its burial, and a subsequent autopsy performed the day following its removal.

FULL TEXT (Article 3 of 6): Constable William Patrick O’Dea said in Central Police Court yesterday that soon after he became ill, Mrs. Marjorie Coleman, (charged with having administered poison with intent to murder O’Dea and two others) suggested that he make a will.

O’Dea said he told her that he would make out a will one day, and it would be in her benefit and his brother’s. Previously he had told her he had been informed he would be the beneficiary in a considerable legacy some time in the future.

A Public Trust officer said Mrs. Coleman had claimed she held a will made by Robert Walter Reynolds, who died in 1942.

Constable O’Dea said that after he went to live at Mrs. Coleman’s residence in St. Mary Street, Camperdown, she told him about a man named Bob. She said Bob had done her a dirty trick at one time. He died after an illness, and she suspected he took his life by poisoning.

Some months later, continued O’Dea, he asked Mrs. Coleman what she thought Bob died from, and she said pneumonia. She said Bob had left a will in her favour, but she had destroyed it.

Witness said that Mrs. Coleman, when she asked why he himself did not make a will, said she did not really want it, but Mrs. O’Dea had not treated him so well and was not deserving of it.

He first noticed a change in his health on January 31 last, whilst he was residing at Mrs. Coleman’s house, he continued. In the morning, he said, he had a cup of tea with Mrs. Coleman and Miss Bewhey. After taking the tea he ran out and had violent vomiting attacks.

He left for Balmain Police Station, but was too ill for duty and went back to bed. Next morning he had another cup of tea, and was sick again soon afterwards. He resumed work a few days later, but after a day became ill again. He was taken to Balmain Hospital, and remained there about five weeks.

O’Dea said he made a slight implement in the hospital. He then returned to St. Mary Street, and after two weeks became sick again.

One day, when brought a glass of water to his bedroom he remarked that it was discoloured. Mrs. Coleman said the light was bad. He drank the water and told her she must have put sugar in it. She replied that his taste was out of order as he was ill.

After that drink, witness said, he began to vomit and had turns during the day.

About September 5, he saw Dr Potts, who took samples of his finger nails, toe nails, and hair Later he went to the police station and was informed he was suffering from poisoning. O’Dea said Mrs. Coleman saw him in Balmain Hospital in September, and said “Why don’t you take the blame for this poisoning? I would do it for you, and it would clear the atmosphere.”

Mrs. Coleman, he continued, then said “You could say you took it yourself and Muriel could say she picked it up by accident or that she took ill herself because Tommie the sailor would not marry her  She added that she wanted him to protect Charlie, her husband, from ‘bother’ with the police.

O’Dea said that last Easter he intervened in a dispute between Mrs. Coleman and Miss Bewhey. Two weeks later Miss Bewhey started vomiting and lost the use of her limbs. She went to hospital and later lived with friends.

FULL TEXT (Article 4 of 6): Sydney, Tuesday. – Mrs. Irene Gladys Crocker, trained nurse, said in the Central Police Court. to-day that Mrs. Marjorie Coleman once told her that Constable William Patrick O’Dea was giving her arsenic by soaking fly targets in water and giving her the liquid.

She said Coleman was employed by her as a cook from July till September, 1916. At one time she was away for about 10 days. She said she was ill from arsenical poisoning. She also said that. O’ Dea gave her arsenic in her drinks.

[“Alleges Constable Tried to Poison Her,” The Advocate (Burnie, Tasmania), Dec. 4, 1946, p. 5; spellings of proper names have been changed to match those found in other articles]

FULL TEXT (Article 5 of 6): Sydney, Wednesday: -- Mrs. Marjorie Coleman, 43. was committed for trial at Central Court to-day on three charges of administering poison. Bail was refused. Mrs. Coleman was charged with administering poison to Miss Muriel Bewhey and Constable William Patrick O’Dea this year, and to Robert Walter Reynolds in 1942.

When committed, Mrs. Cole man said: “I am not guilty and I reserve my defence.”

Miss Bewhey said that after taking two mouthfuls of tea on May 16 she shuddered, and remarked to Mrs. Coleman that the tea “was horrible”. Mrs. Coleman had then filled another cup of tea for her. This also had a horrible taste.

Mrs. Coleman drank a cup of tea at the same time. Miss Bewhey said that shortly afterwards she felt very sick in the stomach.

“I left for work with Mrs. Coleman, feeling very ill. Mrs. Coleman before alighting from a tram at Broadway advised me to return home if I felt no better.

“I continued to my place of employment but shortly afterwards returned home and went to bed.”

~ Cups of Tea in Bed

When she got out of her bed and told Mrs. Coleman about her loss of feeling, Mrs. Coleman had said: “It must be caused by weakness through being in bed.”

Miss Bewhey said Mrs. Coleman gave her cups of tea while she was in bed. She could only take two mouthfuls of the tea, which tasted ‘like musks’.

Later, on Mrs. Coleman’s advice she went to a doctor, who told her that nothing could be done for her. She returned home and went to bed.

“During my illness Constable O’Dea used to bring my tea, which tasted like musk lollies. Everything I drank at that time tasted the same.

“I got on well with Mr. and Mrs. Coleman, but not with Constable O’Dea,” she added.

To Mr. Thorn (for Mrs. Coleman), Miss Bewhey said she had written a letter saying: “I would like you to understand and believe me when I say I definitely do not believe Marge (Mrs. Coleman) was the cause of my illness.”

“Mrs. Coleman has always been kind to me and I know of no reason why she would want to poison me.”

Miss Bewhey said she had often seen Constable O’Dea draining water from a fly trap, but she did not know what he had done with it.

To Mr. Thorn’s suggestion that the fly traps might have contained arsenic, Miss Bewhey said she would not know arsenic if she saw it.

An earlier witness, Mrs. Edith Ellen Gaffney, said she had known Mrs. Coleman for about three years. About last Easter she heard a few words between Mrs. Coleman and Miss Bewhey in a Newtown Cafe, where Mrs. Coleman was night manageress.

Mrs. Gaffney said that Mrs. Coleman, with whom she had not been to friendly said to her: “I can’t understand what Muriel has done to me. If she riles me much longer I will do her in”.

FULL TEXT (Article 6 of 6): Sydney, Friday. – Mrs. Marjorie Coleman, 42, who was committed for trial last December on three charges of attempted murder by poisoning, was released from gaol on Tuesday.

The State Attorney-General (Mr. Martin) has decided not to file a Bill.

Her solicitor has been advised that the Crown has decided not to prosecute further.