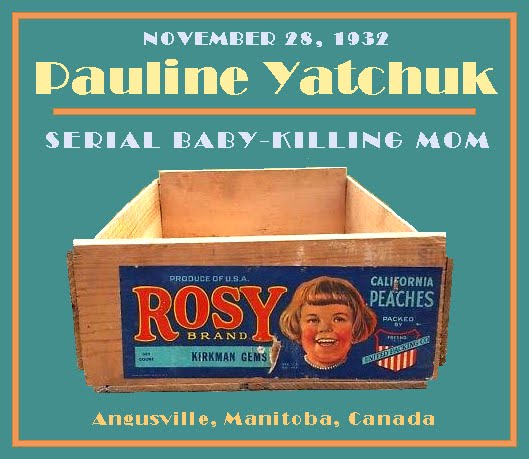 The final sentence of the final text here tells the salient part of this convoluted tale.

Article 1 of 3 – July 12, 1933 - Angusville farmer Fred Stawycznyj, 45, is hanged in Headingly for murdering his illegitimate child. The widower farmer and his neighbour Mrs. Pauline Yatchuk began an affair in 1927 after her husband left to work in the U.S.. The two produced four children together, the first three were born dead, (at least that's what Stawycznyj claimed Mrs. Yatchuk told him.) In the case of the fourth child, the one at the centre of the murder trial, Yatchuk said that Stawycznyj was present at the birth. The child was born alive but he strangled and buried the girl in the back yard to keep the affair a secret. Stawycznyj insisted that he was not present and that she told him that the child was born dead. It took the jury an hour and a half to reach a guilty verdict against Stawycznyj. Yatchuk received a two-year sentence. [Source: This Was Monitoba]

Article 2 of 3 – FULL TEXT: Minnertosa, Man., April 4. – Accused by his common-law wife, Mrs. Pauline Yatchuk, of slaying four of their five infant children by strangulation, Fred Stawycznyj, of Angusville, Man., will stand trial for his life, charged with murder, at the spring assizes for the northern judicial district of Manitoba, opening in the Minnedosa court house, Tuesday afternoon. One count of concealment of birth will also be laid against him, while Mrs Yatchuk will be tried on four counts of concealment of birth, to complete the assize docket, which is the smallest in years.

Discovery of the murders was made following investigation by the B.C.M. police of an anonymous letter received by the justice of the peace at Angusville, which Mrs Yatchuk later admitted having instructed a friend to write, and which subsequently led to the arrest of both Mrs. Yatchuk and Stawycznyj, when they were charged with murder. The bodies of the infants were found near the Yatchuk home, rude shack, about a half-mile west of Angusville, buried in coffins of apple boxes.

Mrs. Yatchuk aided the police in finding the tiny graves, which were no deeper than two feet below the surface. She claimed that she had borne five children between September 1, 1929, and June, 1932, four of which had been strangled by Stawycznyj shortly after birth, the fifth being stillborn. She also stated that no one but herself and Stawycznyj were present the births. The bodies of the infants were in a badly decomposed state and inspection by medical authorities failed to determine the cause of death.

Stawycznyj was committed was committed for trial at a preliminary hearing held In Russell last December, when Mrs. Yatchuk definitely accused him of putting the children to death by strangling them, while relating her illicit relations with the accused. The charge of murder against Mrs. Yatchuk was reduced to charges of concealment of births, when the court ruled that there was not sufficient evidence to commit her on the more serious count.

Article 3 of 3 – EXCERPT: As soon as the police discovered the remains of five infants, they took Stawycznyk and Yatchuk into custody and charged them with murder. Yatchuk had already confessed her part in the deaths of the babies, but Stawycznyk denied murdering anyone. He told investigators that he knew where the body of the fifth was buried only because he put it there, after he was told to do so by Yatchuk. Besides, he said, he was not the only man with whom she was carrying on.

Less than two weeks later preliminary hearings were held to determine if there was sufficient evidence to commit the pair to trial. Stawycznyk want first. The story Yatchuk told at his hearing was identical to the statement she gave police, and Stawycznyk was bound over for trial. At the end of Yatchuk’s own preliminary, the presiding magistrate decided there was evidence that the fifth child was stillborn and not murdered, and he directed that the murder charges laid against Yatchuk be replaced with charges of concealing a birth. There is some doubt whether that was an appropriate decision. Sixteen days after her preliminary hearing ended, Yatchuk was overheard confessing that she killed her babies by herself.

[Dale Brawn, Chap. 1 “Fred Stawycznyk and Pauline Yatchuk: Babies in Boxes,” Practically Perfect: Killers Who Got Way With Murder … For a While, Dundurn, Toronto, 2013] 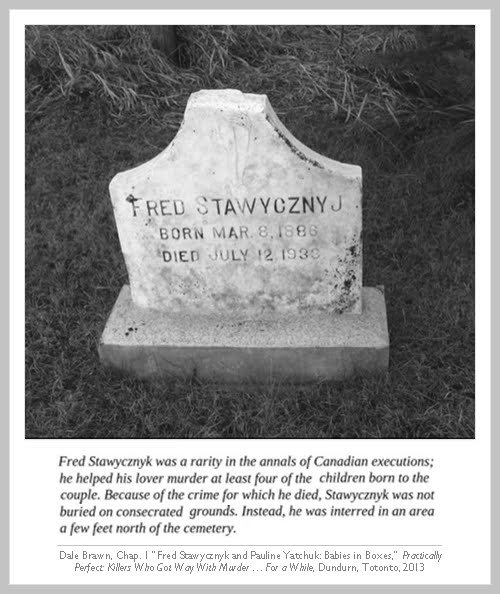 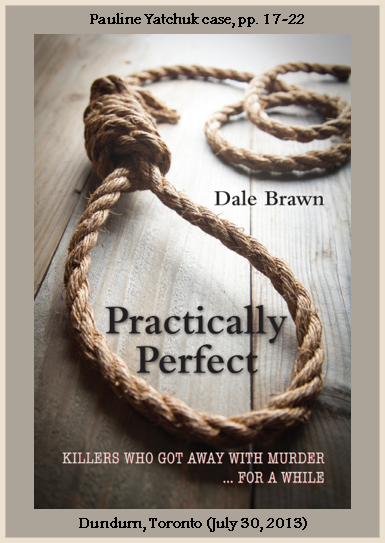 For more cases of this type, see Serial Baby-Killer Moms.
***