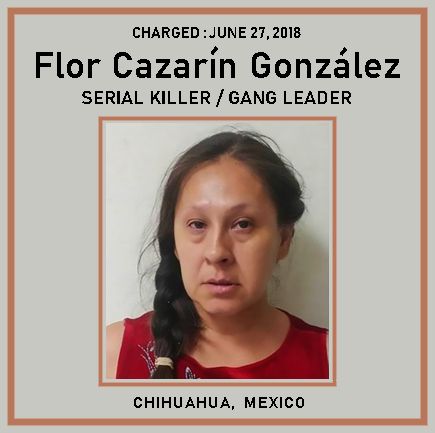 FULL TEXT (Translated from Spanish):  A testimony presented yesterday at a hearing for the murder of a woman, committed in 2016, revealed that for several months in Ciudad Juárez a woman nicknamed "La Madrina" led a group of at least five members who were drugging people to robbing them of their vehicles and murdering them viciously before they reported the robberies.

The alleged leader of the organization –Flor Cazarín González nicknamed “La Madrina” - became friends with the victims, invited them to eat or drink to supply Clonazepam and put them to sleep; Then the others involved helped him transport the victims to solitary places where they stabbed and hammered them to death and kept the vehicles and then sold them.

After the murder of Griselda Mojarro Delgado, which occurred on November 24, 2016, hours after she left her business in the company of Cazarín González - who presented herself to the victim and her relatives only as Adriana , the Gender Prosecutor's Office began an extensive investigation that led to the determination that both "La Madrina" and her son Roberto Rodríguez Cazarín, nicknamed "El Acro" or "Tocino" and at least three other people were dedicated to surprising vulnerable people to steal vehicles and sell them before they reported like stolen.

Without specifying a date, that witness announced that in late 2016 "La Madrina" spoke to him to tell him that he had a job for them and they met in a park located on Dunas de Libia and Puerto Tarento streets near the house of that informant. This was explained by an MP agent to the Apolinar Juárez Castro Control Judge, in a public proceeding carried out yesterday in the fourth appeals room of the local courts.

Griselda traveled with the accused. As the victim entered the bathroom of the witness's house, “La Madrina” put some clonozepam pills into Griselda's drink, but she did not take it. Then Cazarín González invited her to eat at her home on 2260 Volcán Antuco Street in the Parajes de San Isidro subdivision and two hours later she spoke to witness three again to ask him to come and help her with the victim.

“When I arrived, I parked and ‘El Acro’ lowered the victim, who fell to the side. Then ‘La Madrina’ gave him two hammer blows, one to the side of the head and the passive (Griselda Mojarro Delgado) got up, then ‘La Madrina’ gave him another blow to the mouth with the hammer and the female fell to the ground. Immediately the aggressor took a large knife from her bag and began to stab her in the chest and neck while laughing, ”witness three stated before the MP. The Sebring car was sold for eight thousand pesos.

Witness three also said that they knew that “La Madrina” and “El Acro” were dedicated to killing people and she had about 25 victims, both men and women. Some of these are the owner of a cyber café whose computers and a truck were stolen, as well as a person who had video game machines and a truck stolen from him.

Another protected witness identified as number two said he knew that "La Madrina" was looking for older people to drug and kill them. As cases, he cited the crime of a taxi driver who took a car that was sold for 20 thousand pesos and the murder of a person identified as Carlota Muñoz Durán, for whose murder the investigation folder 20164.16 was started.

The investigations also led to the establishment that “La Madrina” stole the identity of a person named Azalia Evelyn H.H., to contract a telephone service and use it as a contact with her victims.

Other testimonies collected by the MP attached to the Gender Prosecutor's Office are the statements of three people involved with the purchase of the Sebring car. Apparently the first purchaser of the car, whose name is omitted for security reasons, believed in the word of "The Godmother", who identified himself as Adriana Fonseca Tellez, also explained that he was urgent to sell that car and allowed to have his picture taken, as he said he lacked an ID.

The number one buyer in turn sold the Sebring to another person (whose name is also omitted for security) and he tried to transfer it to a third buyer, who decided to go and find Griselda Mojarro Delgado, as buyer two had the her voter card (the victim) and all she knew was that the papers in the car were in her name.

When going to the home, Griselda's husband informed her that her partner had disappeared on board that vehicle. So the buyers decided to voluntarily hand over the car and also the photograph of the person who identified himself as Adriana Fonseca Tellez, who turned out to be "The Godmother."

From that moment, the investigators of the Prosecutor's Office were able to have a face of the alleged perpetrators and began a search in databases that led to the location of the witnesses who now have the quality of being protected and apparently are involved in the crimes of about 25 people, this was revealed in the diligence carried out yesterday.

That hearing instructed Roberto Rodríguez Cazarín to file legal charges for the murder of Griselda Mojarro Delgado. He was also detained yesterday pursuant to an arrest warrant.

On Wednesday [Jun. 27], “La Madrina” was also brought before the same Control Court to accuse her of the same murder.

The precautionary measure of preventive detention was imposed on both of them and next Monday at 10:30 in the morning, the hearing on whether or not to join the process will begin, led by Judge Apolinar Juárez Castro.

"I want to know where my dad's head was buried, because they cut it off. Let her tell me where she left him,” pleaded one of Gilberto Muñoz García's daughters, the woman's alleged victim.

Those who knew her testified that most of her victims were elderly and analyzed them to get closer to them. She used clonazepam (a drug that acts on the nervous system) to put them to sleep, but before that she made sure to get her vehicle bills. She finally killed them. 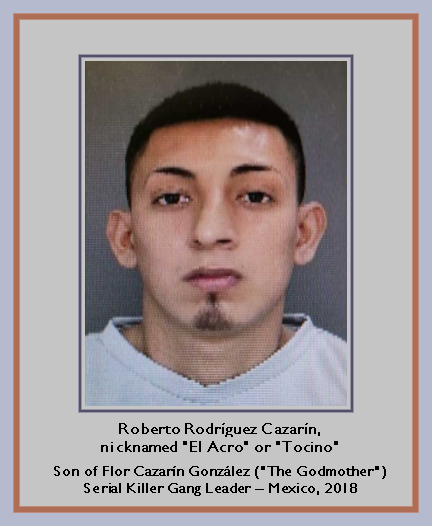