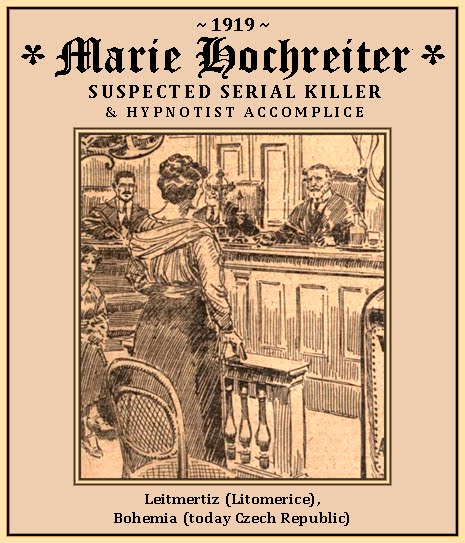 FULL TEXT (translated from German): After several days of negotiations before the District Court Leitineritz the verdict against the high school teacher widow Marie Hochreiter because of three poisonings with arsenic, last on her husband, the 70-year-old high school professor Hochreiter in Teplitz, like. Co-accused was the grammar school professor Julius Nessler, because he favored their plans by applying hypnosis to one of the victims of Hochreiter and elicited 3000 crowns from a woman Barbara Holik by means of  hypnosis. Both defendants declared themselves not guilty. The defendant Hochreiter stated that she did not take the money she had found from the victims of the poisoning murders which she had pleaded with, but had received it from her lover, a Count Coudenhove.

Processor Nessler stated that he was concerned with hypnosis and suggestion, but only for scientific and not for criminal purposes. When asked why he had subservient services to Hochreiter, the accused replied that although he himself practiced hypnosis and suggestion, he was under the hypnotic and suggestive influence of this woman, which he described as hypnotic attachment. The court ruled that Marie Hochreiter was acquitted of the poisoning murders, but was sentenced to five years imprisonment for theft and robbery, and Professor Nessler was acquitted. 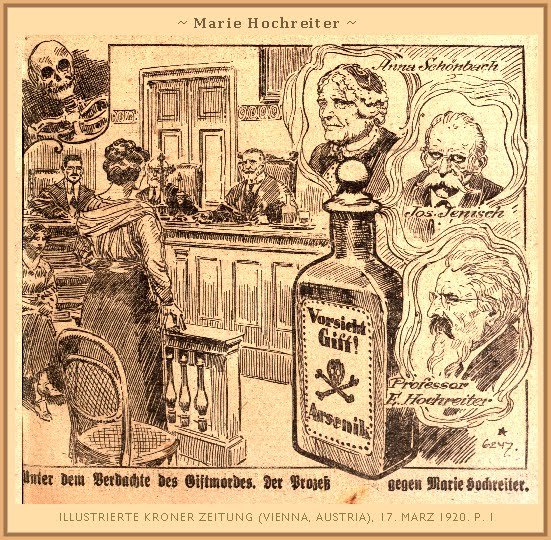 FULL TEXT (translated from German): Leitmeritz. March 13th. – Before the Leitmeritz jury since Thursday, a murder charge is being negotiated, which disclosed a criminal life, which finds parallel only in sensational crime novels.

The defendant Marie Hochreiter had grown up in a poor home. The father was a good-for-nothing and roughneck, the mother quack and angel-maker. Marie, raised under these oppressive and ruinous influences, is described as cunning, labor-shy, greedy and ambitious; she married a factory official named Haman in Aussig. From him she got her daughter Irene. However, she soon left her husband, went to Teplitz and continued as a midwife and a men’s masseuse.

In Teplitz she met the first lieutenant widow Schönbach, into whose house she moved. After a short time she succeeded in gaining the confidence of this old, otherwise distrustful lady, and to force herself into the place of her servant girl, whose dismissal she caused. At the beginning of April 1918, Schönbach now received ready cash from a locked safe and she then placed an advertisement. The police agent sent to the house was, under very obscure circumstances, not allowed entry to the house on the day after the announcement. The next day, on April 5, Hochreiter reported to the police station at 8:30 in the morning that her mistress had not shown up all day and that something had happened to her. The lady was found dead by the police on the sofa in her living room.

The death of Frau Schönbach was not not surprising considering her age. One was surprised only by a single detail: the estate; for it seemed that Schonbach left absolutely no fortune and no securities, although her friends and acquaintances knew that she was wealthy.

Marie Haman was probably already being investigated, but it was not until the renewal of the investigation following Professor Hochreiter, her last husband, that a list of the Schönbach securities was found, and at the same time Haman discovered these papers through the intermediary of a Viennese lawyer, who had previously sold his law firm in Teplitz to a Viennese bank and at a Prague and made a deposit of 50,000 crowns.

Immediately after the death of Frau Schönbach, she met Josef Jenisch, a frail 69-year-old man who was suffering from a spinal cord injury and cancer. One of her associates, the former high school professor Nestler, hypnotized Jenisch, planting the idea to dismiss his old housekeeper and hire Marie Haman.

On 17 December Josef Jenisch traveled with Marie Haman and her daughter Irene to Leitmeritz. They rented two adjoining rooms in an inn for the day. About nine o’clock in the evening Irene Haman came to the chambermaid and gave her ten crowns with the remark that nobody should wake Jenish before 9 o’clock in the morning. She then went away with her mother and the two came home around 11am. In the late nighttime, the caretaker saw one of the two rooms lit up.

At 6 o’clock in the morning, both of them asked for their breakfast, but did not receive it until 7 o’clock in the guest room, got playing cards and ordered two quarters of a liter of wine twice. At the warning of Haman the housemaid at about 9 o’clock awoke Jenish and found him dead on the sofa. After the death of the Jenish she tried, on the basis of a falsified sales receipt she gave to Professor Nestler, to obtain Jenish’s furniture valued at 20,000 crowns.

Soon afterwards, on February 6, 1919, after a short acquaintance Marie married a frail widowed and retired 69-year-old, high school professor Emanuel Hochreiter, who moved into her apartment. She sought to implement the adoption of her daughter by Professor Hochreiter. Professor Hochreiter owned a fortune of 20,000 Kroner apart from his pension. On the 13th of June, 9 o’clock in the morning he suddenly died, after a doctor had found him in his room about 11 o’clock in the morning, apparently after a fall in an agitated condition. Here, too, Frau Hochreiter pushed for a quick funeral, and here, too, she had two liters of beer brought before the death before 9 o’clock on Sunday. The castle chaplain, who wanted to minister to Frau Hochreiter, was fetched by Irene Haman and had the impression that her eyes were artificially reddened.

In the apartment he was received with a friendly air as an ordinary visitor, while performing the usual prayers, Frau Hochreiter interrupted with the remark: “Please, how much must one pay?”, and it seemed to him as if even during the soldering of the coffin the two women behaved very badly. On the day before Hochreiter’s death Frau Hochreiter had his savings deposited in the name of his first wife and deposited a fake will of her husband with a lawyer. But on the evening of the same day, she and her daughter were arrested.

The investigation showed that Marie Hochreiter poisoned her victims by administering small doses of arsenic. First she got herself a fortune (stealing the securities of the Sthönbach, seizing the valuable jewelery and the furniture of Jenish) and, finally, the title of high school professor’s wife and a widow of the professor, on which she was very proud. Hochreiter approached in principle only old and frail people and gave them arsenic in small quantities. The three deaths had nothing surprising about them.

Anna Schönbach was 85 years old, Jenisch 69 years old, furthermore suffering from severe back pain, just as as the asthmatic Professor Hochreiter was able to move with difficulty. In no case can the experts assert with certainty whether the victims of Marie Hochreiter died as a result of arsenic or other ill-health. If it were not for her reputation, her deeds have remained unknown; no one would probably have come upon the traces of her crimes at all. 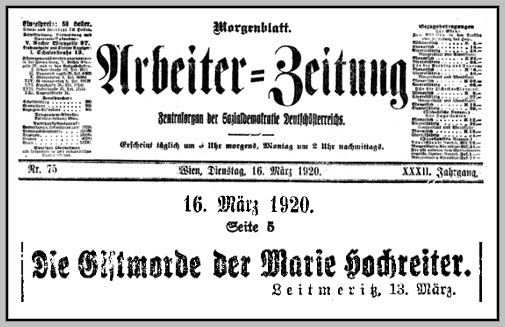 The following article gives a long list of property stolen by Hofreiter: 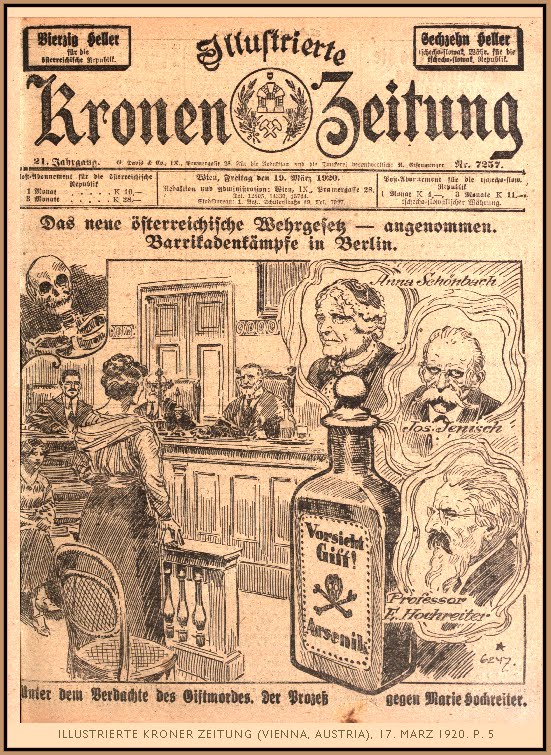 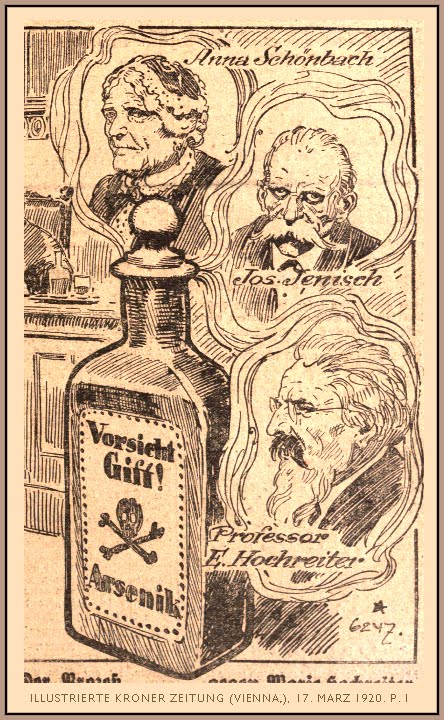