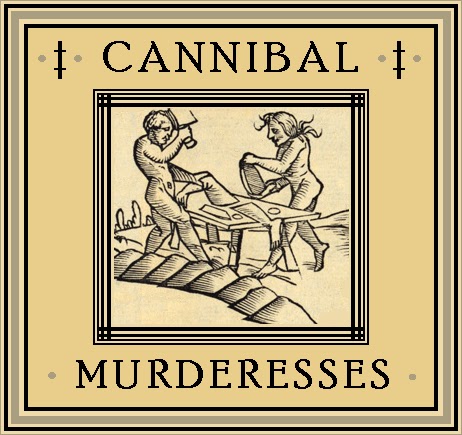 1663 – Queen Nzinga – Ndongo (Angola) – “[One account] claims that after becoming queen, she obtained a large, all male harem at her disposal. Her men fought to the death in order to spend the night with her and, after a single night of lovemaking, were put to death. It is also said that Nzinga made her male servants dress as women. In 1633, Nzinga's oldest brother died of cancer, which some attribute to her.” “It has been suggested that Queen Nzinga was a cannibal, Cannibalism was part of the lifestyle and dietary practices of the Imbangala tribe of Africa. Stories about Imbangala cannibalism were reported by African witnesses like the kings of Kongo who complained about it.” (Serial Killer)

1856 – Elizabeth Cahy – Hobarton, Australia – attacked a woman, chewing off a portion of her brow.

1888 – “Peace River Female Cannibal” – Peace River region, Alberta, Canada – “The woman who is the cause of the present case of cannibalism turned wehtigo [a person possesses by an evil spirit that devours mankind] some years ago and killed and ate one of her children before she was suspected. … At intervals of four or five months her craving for human blood returns, and while in these fits it is reported she assails the first person she meets. Most of her children have fallen victims, having been slain with an ax. The half-breeds and Indians are in terror, and it is probable a police force will be sent to Peace river to arrest the man eater.” (Serial Killer)

1889 – “Abittibee Lake Cannibal Mother” – Abittibee Lake, Ontaria, Canada – “In the vicinity of Abittibee lake he was shown an Indian child whose grandmother had killed and eaten seven of her young children, the child’s father being the only one to escape.” (Serial Killer)

1892 – Miss Akkerman – Bessarabia (Moldova) – house guest who murdered two of her hosts’ children, and was caught eating the corpse of one of them.

1900 c (circa early 20th c.) – English “Jane” – Belgian Congo – On the run from English police after thrusting a hairpin through her husband's eye killing him, Jane ended up in the Congo, where she became one of the wives of a chieftain who converted her to cannibal practices.

1913 – Frau Kocheritz – Berlin, Germany – She murdered her boyfriend, sliced out his heart, baked it and dined upon it.

1993 – Carolyn Gloria Blanton; legally changed name to Jane Lynn Woodry – Alamosa, Colorado – Blanton shot boyfriend Peter Michael Greene four times with a revolver, dismembered his body, wrapped his torso in a blanket, and stored it in a closet in his home, but took the legs home to her kitchen. She took bite-sized chunks from his legs and cooked a stew with them.

1995 – Filita Mashilipa – Zambia – prosecuted as a witch who killed and ate six of her own children in order to gain magical powers (Serial Killer).

1996 – Lyudmila Spesivtseva – Novosibirsk, Siberia, Russia – with son, Sasha, killed an estimated 32 teenage girls, who were raped by the son and cut up and cooked by the mother. “The only living witness, 15-year-old Olga Galtseva, was forced to eat soup made out of her friend. She died a day after being discovered.” [Wikipedia] (Serial Killer)

2015 – Tamara Samsonova – St. Petersburg, Russia – On August 5, 2015 the sensational news that Samsonova may have cannibalized her victims appeared in the international media. Police are giving out little about their ongoing investigation, but reports are that the woman had cut out the lungs of those she murdered and consumed the organs. (Serial Killer) 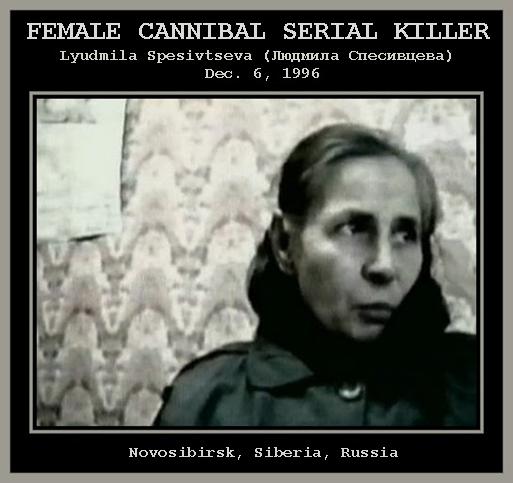