FULL TEXT (translated from German): Friday towards midnight, the trial was brought to an end against farmwoman Johanna Schadenhofer in St. Pölten. According to the statements of the prosecutor Kloss, once he reiterated the charge the defendant began to “cite her innocence” again. The chairman let her talk, but when the chatter did not stop, he cut her off: “It’s all right, sit down again!”

The accused whined and cried throughout her lawyer’s speech. During the judgment consultation she had screaming fights, so that she was ejected from the courtroom. At the corridor, her water was served, but nothing on the neck. She was then taken over to the prison house.

When the the Chairman learned the Tribunal had finished its deliberations, he immediately ordered the defendant to be returned in the courtroom, for the verdict must be delivered in the presence of the defendant. While in the holding cell, it took a long time for the defendant to settle down so that she could be presented. 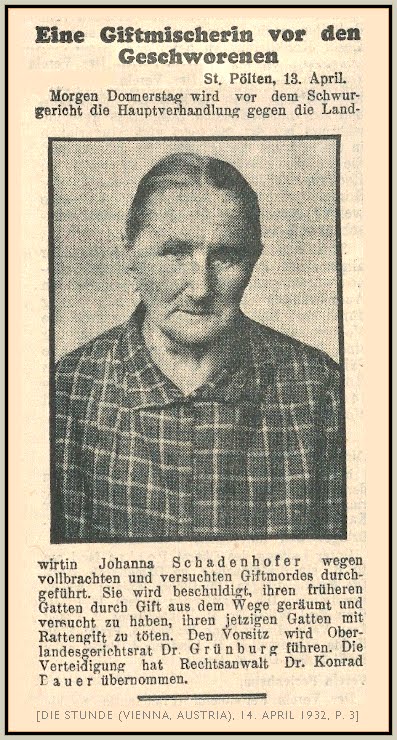 FULL TEXT (translated from German): St. Pölten, April 14 (G. P. D.) - Greed and stinginess have brought the 59-year-old wealth owner Johanna Schadenhofer before the jury of the District Court of St. Pölten. Three husbands have made the defendant happy. Two died by her hand.

The one by poison, the other by suicide and the third, it has only a lucky coincidence, that he can thank for escaping the poisoner.

The defendant offers the following facts:

On February 7, 1910 the defendant Johanna Schruf – maiden name – married the 45-year-old widower Josef Klammer, a business owner. The coexistence of the couple was not the best.

On August 3, 1915 Josef Klammer committed suicide by cutting his throat with a knife.

He was then determined that the man had committed suicide from fear of being arrested. But that is incorrect. We know, the defendant claims, that Klammer often complained about his wife and repeatedly stated that he would like to exchange her for another, but unfortunately he was too old. Therefore, he was driven by the ugly quarrels and the incompatible, habitual nature of his wife to his death.

~ Second husband is “nurtured to death” ~

The widow did not even observe the customary year of mourning. She soon consoled herself, ten months after Klammer’s death.

In May 1916, she married the farmer Franz Kohlhuber, who owned a property in Mitterburg.

He too was a widower and had some children from his first marriage. Johanna Kohlhuber, as the accused was now called, was added on the deed of also the house, but also remained owner of the estate, which she had inherited from her first husband, until she sold it in 1917 for 8000 crowns, but property she kept her five-Joch [unit of measurement] parcel of forest property.

At the end of 1927, Franz Kohlhuber began to feel ill, but nobody knew the reason. He was aware of the cause, but only he knew. Not once, but repeatedly, he said that he was afraid of the food his wife was cooking him, as he suspected that he had been poisoned. He even ordered food prepared elsewhere his house, which he did for some time.

Johanna Kohlhuber could not want to tolerate this, so she locked the house and did not let the person who brought the food for the old man into the house.

How right Franz Kohlhuber was with his suspicions is shown by the following incident:

The doctor prescribed a medicine for him, of which ten drops should be taken three times a day.

But Johanna Kohlhuber wanted to schedule her husband to a tablespoon every two hours, with the intention that the poison contained in the medicine would then do its job. But Franz Kohlhuber refused to accept any medicine. On April 5, 1928 he succumbed to the “nurturing” of his wife.

The reason hy Franz Kohlhuber was locked up by his relatives during his lifetime, and even after his death, and why Franz Kohlhuber died 14 days after his son could no longer feed him remained a mystery until 1931, when Kohlhuber’s suspicion that he was being poisoned was confirmed.

The exhumation of the corpse,which took place on 5 September 1931, had the surprising result that a large amount of barium was found in it, so there is no doubt that Franz Kohlhuber perished from barium intoxication.

At Carnival time in 1929, another ten months after the death of her second husband, Johanna Kohlhuber married Johann Schadenhofer. He had had a business that he had handed over to his daughter after the death of his first wife, who at the same time held a wedding with her father present in the autumn of 1929. Schadenhofer made a wedding gift of 3000 shillings cash, a calf, grain fruit and hay based on his wife’s proimise that he would be made half-owner of the house. Further, Johann Scadenhofer place another 1000 shillings, the proceeds from the sale of a meadow, into his wife’s business.

As long as Schadenhofer had money, living with his wife was just manageable. It was different when he had no more money and was being deprecated.

Although it was concluded with a lawyer between the two spouses a settlement and granted him a guarantee. The circumstances became intolerable once Johanna Schadenhofer’s daughter, as the accused was now called, had married.

~ Rat poison in the coffee ~

Between Christmas and New Year of the year 1931, the Schadenhofer fed her husband liver dumplings for the next time, which he had to eat alone; the boarders had eaten earlier.

Immediately after enjoying the dumplings he felt sick.

It is clear that he was poisoned by dumplings. At Easter 1931 Schadenhofer left the house and went out of town to work and returned home only every Saturday.

Often when he came home, his wife gave him a coffee that had a foul odor.

Several times he poured the coffee out. But once he filled a bottle he had cleaned before and took it to the police.

A chemical examination of the sickeness-producing contents revealed that it contained thallium sulfate, a common rat-killer.

Only Johanna Schadenhofer prepared her husband’s coffee, which made it clear that it was only she who had mixed the poison in it. She was arrested and taken to the district court of St. Pölten. In the course of the investigation, the death of her second husband was also looked into. The accused denies eliminating her second husband and attempting to kill her third husband. The accused, however, now admits that there could be no doubt that she was the poisoner, and the defendant sees the motive of her actions in her greediness. 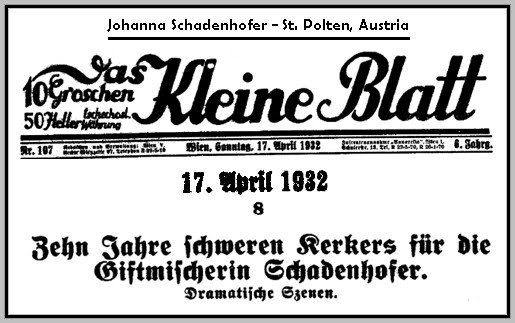 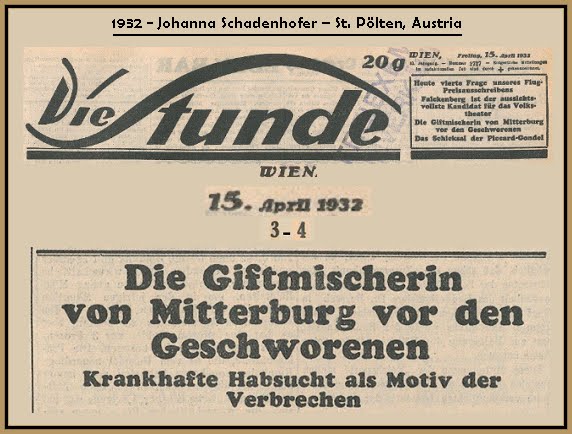