Duan Zhiqun, Half of a Serial Killer Bandit Couple – China, 2003 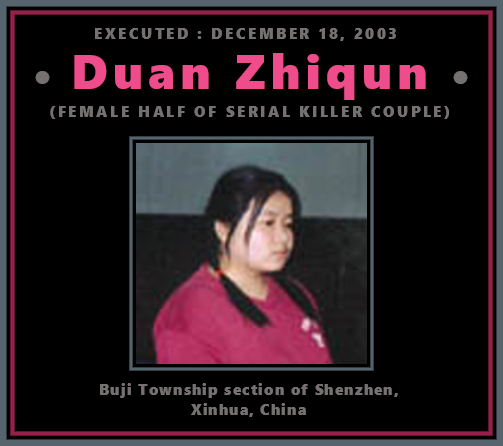 FULL TEXT: A couple have been arrested and accused of robbing and killing 12 women in southern China over a five-month period, preying on job seekers in the boomtown of Shenzhen, state media and local officials said Wednesday.

Ma Yong, a 43-year-old man, and Duan Zhiqun, a 20-year-old woman, are suspected of luring the women by posing as employment brokers, the Xinhua News Agency reported late Tuesday.

A Shenzhen police official who gave his name only as Mr. Xie confirmed the details to The Associated Press but had no further information.

Ma was arrested Oct. 12 and Duan was arrested Oct. 23, the report said. Identification cards, clothes and traces of blood from the murdered women were found in the suspects' home, and the 12 victims' bodies were found around the Buji Township section of Shenzhen, Xinhua said.

The couple are accused of killing the women and taking their belongings, the report said, noting that the victims had mobile phones and “looked physically weak.”

“They were motivated by money,” a Buji Township government worker who gave his name only as Mr. Xu told The Associated Press. Six police stations in the area had received reports of women who disappeared while looking for work between May and September. A Buji police official who wouldn't give his name said most of the 12 women were from mainland China and were seeking jobs in Shenzhen.

Shenzhen, which is in Guangdong province just opposite Hong Kong, is a special economic zone with preferential policies to attract foreign investment and promote China's efforts to become more market-focused.

FULL TEXT (auto-translate from Chinese): In just half a year in 2003, in the name of "recruitment", the two lured 12 women who were looking for jobs alone into their rental house, killed them by strangling their necks, and then looted their carry-on luggage. Mobile phones, bags and other belongings, and then brutally dismembered the victims into countless small pieces and discarded in the river or in the grass.

Ma Yong, 43 years old at the time, a native of Hengdong County, Hunan Province, with a technical secondary school education. Since he came to Shenzhen, he has been underappreciated for many times and cannot find a job. After a long time, he has no reason to resent the society and began to think about doing things Do something criminal to get revenge on society.

At the end of 2001, Ma Yong met Duan Zhiqun, a 20-year-old woman from Pengxi County, Sichuan Province, during a prostitution visit. Because Ma Yong was kind to her, the two soon developed into a cohabiting couple, living together in Daping, Buji Town, Shenzhen. In a rental house on the road.

Duan Zhiqun was sold to a brothel as a prostitute by a human trafficking gang when he was 14 years old, and his life has been unsatisfactory. Under Ma Yong's gentle offensive and instigation, the two began their criminal road.

From May to October 2003, the two came to an employment agency in Buji Town, Longgang District, Shenzhen, to pretend to be a representative of a recruitment company many times.

In the name of introducing jobs, they tricked 12 women into their rental house in Phuket Town, and attacked from behind while the victims were looking down at the job-seeking materials on the table.

Strong hands strangled him and plundered the victims' mobile phones, handbags and other belongings.

Afterwards, the two dragged the victims into the bathroom, and Ma Yong dismembered the bodies with fruit knives, kitchen knives, and axes. In order to prevent the identity of the victims from being exposed, they also used scissors to damage or strip the victims' faces and hair. , and then wrapped the corpse in five or six black plastic bags, and dumped it in the Buji Nong Market and the wilderness near the Buji River.

In just half a year, there have been frequent disappearance cases, and the missing women are all single women in their 20s who are looking for a job. The successive disappearances of young girls were taken seriously, and investigations were carried out. Subsequently, Ma Yong and Duan Zhiqun were finally arrested and brought to justice from October 12 to October 23, 2003.

During the interrogation, the two confessed to the crime of murdering 12 victims. According to the confession, Ma Yong committed a total of 12 crimes, and Duan Zhiqun participated in the crimes 5 times and robbed 10 mobile phones.

On November 25, 2003, Ma Yong and Duan Zhiqun used the method of killing others to steal property for the purpose of illegal possession, which violated the provisions of Article 263 of the Criminal Law of my country and constituted the crime of robbery. Because of their extremely cruel, vile and harmful means of committing crimes, the consequences were particularly serious, and the court issued a death sentence in accordance with the law in the first instance. 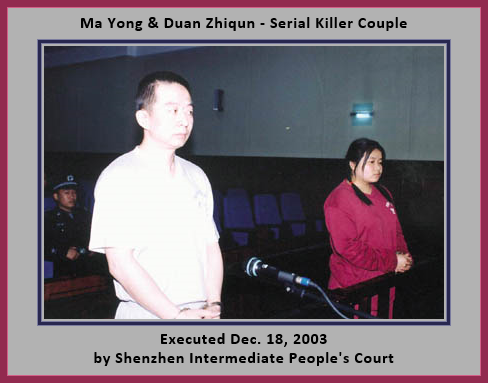 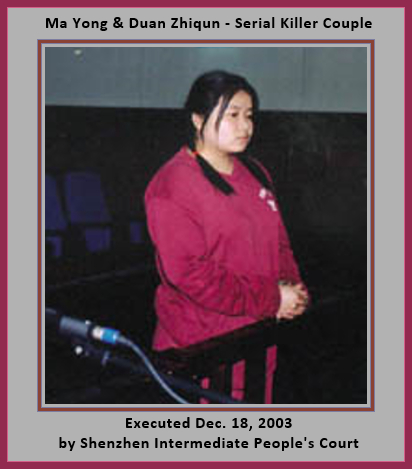 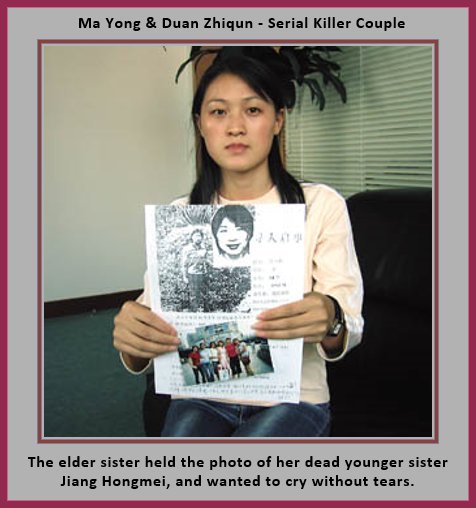 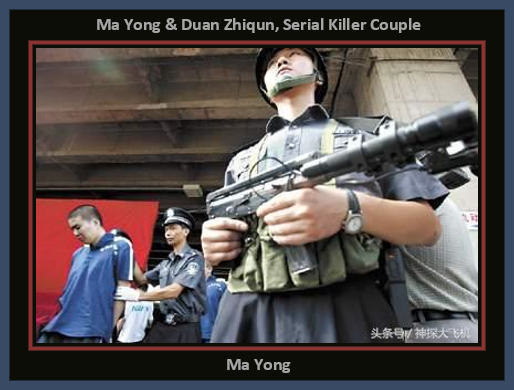 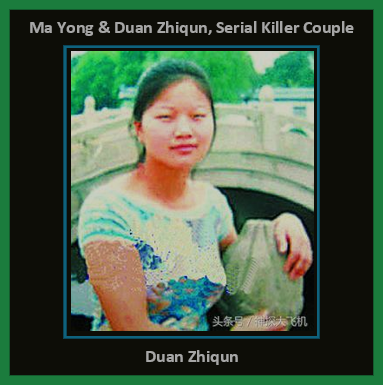