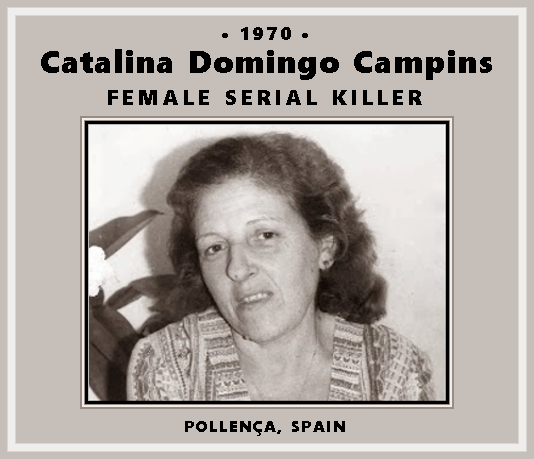 Catalina Domingo used arsenic to end the lives of her children, two husbands and relatives. Her crimes took place in the small Spanish town of Pollença, located in the north of the island of Mallorca.

EXCERPT (translated from Spanish): The story begins with the marriage of Luis Palmer and Juana Domingo, the poisoner's aunt. The couple opened a shop in Pollença where they sold objects made of wicker. Thanks to their efforts they managed to have a comfortable existence, they even made a small fortune to face old age. The marriage only lacked one thing to complete its happiness: children. Having no offspring, they felt the impulse to lavish tenderness on other people's children, especially on their niece Catalina, daughter of Francisca, Juana's only sister. The girl was prematurely orphaned and her uncles wanted to protect her. However, this soon proved to be a liar, entangling and very fond of love affairs. She gave the men the money she stole from her mother and uncles.

The woman married Pedro Coll, the son of some neighbors, at the age of 23. Pedro worked as an orderly in a funeral parlor, he was strong and good-natured. The couple seemed to be very much in love, had a car, a motorcycle and went out to have fun with friends. Some of them declared to El Caso that they had Catalina Domingo pierced because they didn't think she was a good woman. The young couple had two children, a boy and a girl, but both perished while still young. First came the male, blond and with blue eyes. One day he suddenly fell ill with colic, diarrhea and vomiting of unknown origin. The doctor could not get the diagnosis right and his situation worsened until he died at the age of five. Only three months later the daughter was born, who died when she was 17 months old in a rapid and inexplicable way. She leaned on her husband and uncles, whom she visited regularly.

In late 1967, Pedro began to complain of a rare upset stomach. They gave him very painful colic, with diarrhea and vomiting similar to those suffered by his children, with intermittent improvement and worsening. He died on January 19, 1968, although nobody could believe it. The medical diagnosis was death from myocardial infarction. As the chronicles of the time relate, the duel was unforgettable due to the tremendous pain of the widow. By then, Catalina Domingo had already withdrawn all the money from her husband's savings account and within a few days she had sold the car and motorcycle. He also asked his brothers-in-law to give him their right to inheritance, to which they agreed, taking pity on the situation of his sister-in-law, to whom they had never professed much affection due to her character.

The widow found consolation in her uncles, with whom she went to live. Only a few months later, on May 5, her uncle, Luis Palmer, 65, died, whom she cared for until the end. The deceased had suffered from a stomach condition for several years, even taking medication for her ailment, but nothing foreshadowed that it could cost her her life. The day before the outcome, she suffered a crisis with vomiting and diarrhea that she could not finally overcome. The chronicles say that the grief of the woman during the burial was greatly exaggerated. The influence on her aunt Juana was accentuated after the death of her husband, she even got her to consider him her only heir. The old woman passed away on September 18, just four months after her husband did. Neighbors watched the situation in disbelief. They could not understand why, overnight, a healthy woman died in mysterious conditions, similar to her husband's. This is when doctors become suspicious.

An anonymous complaint led a Majorca court to work on the possible involvement of Catalina Domingo in the deaths of her closest circle. However, the woman went on with her life as if nothing had happened. She had met a widowed taxi driver from Pollença, Juan Vidalet, whom she decided to marry. He did so only nine months after becoming a widow, the minimum time required by law to marry. The taxi driver showed his happiness because in this way his teenage daughter would not have to be left alone during her long working hours. She barely had time, because the judge issued an order for the exhumation of the murderer's first husband and her uncles.

The samples showed that their deaths were caused by ingesting high amounts of arsenic, a deadly compound that can be camouflaged in other products, such as flour or sugar. Arsenic does not decompose, it is soluble, it does not expire and it does not smell. Once ingested, the body assimilates it quickly. It passes from the digestive system to the bloodstream and, from there, it is distributed to all organs, especially nails, hair, arteries and the liver. His acting is slow, but relentless. Catalina was arrested and accused of ending the lives of her children, her husband and her uncles by poisoning them with a commonly used ant killer.

The woman admitted to being the author of her husband's death, but denied the others, perhaps fearing that she would lose the large inheritance she received from her uncles. The prosecutor asked for 45 years of internment for each case, but the Provincial Court of Mallorca only sentenced her to 30 years in prison. She barely turned eight in the Palma, Alcalá and Yeserías penitentiaries. The reduction in sentence was due to three pardons and two special reductions for good behavior. The woman returned to Mallorca. On November 28, 1986, the Ultima Hora newspaper published: “The Pollensa poisoner dies under strange circumstances. The police are investigating a possible poisoning.” Catalina was then 64 years old and the cause of her death was never clarified.

Date? – Sentenced to 30 years for murder of Juana María Domingo. He only served eight years in prison in the Palma, Alcalá and Yeserías penitentiaries. The sentence reductions were due to three pardons and two special reductions for good behavior. 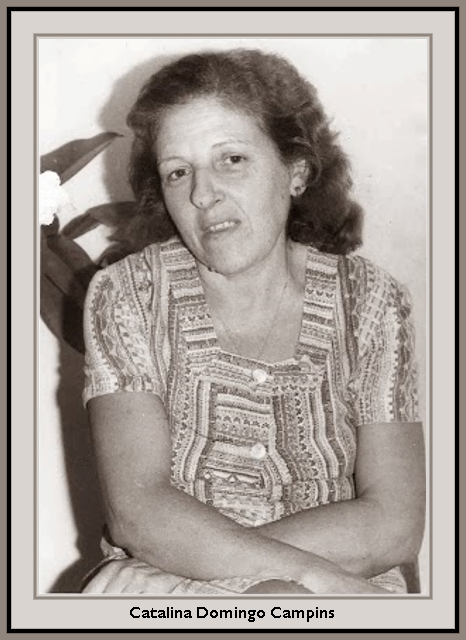 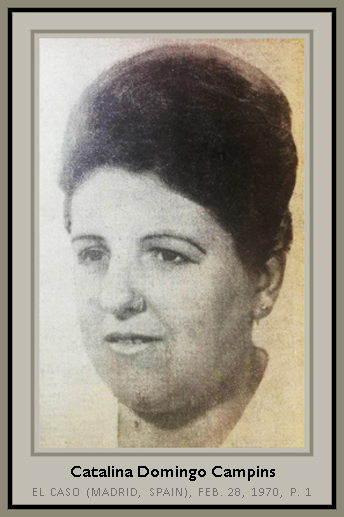